How to Abolish Nuclear Weapons 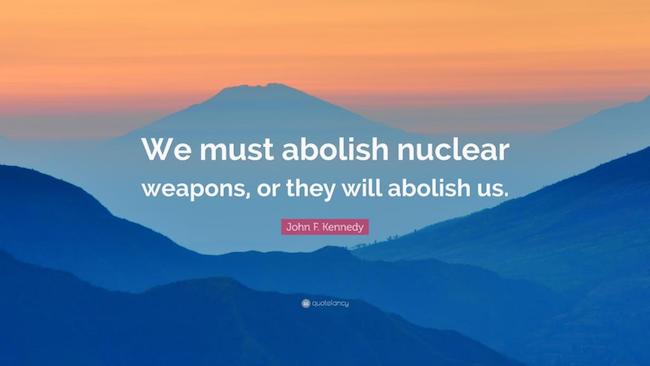 NEW DELHI (IDN-INPS | Rabwah Times) - After the World War II, nuclear weapons were worshiped to be desirable objects for power and security. All the nuclear weapon states are reluctant to abolish their nuclear warheads and are busy in the arms race. Currently, there are 32 states which have nuclear power reactors and nine states among them have been successful in overtly procuring and producing nuclear weapons and a few states like Iran, South Korea, and Taiwan were suspected of developing nuclear weapons. Moreover, the states like Belarus, Kazakhstan, and Ukraine that had inherited nukes from the former Soviet Union have increased the anxiety of the international community.

The anti-nuclear activists and civil society made several initiatives to influence the governmental decision on the development and acquisition of nuclear weapons. For instance, the launch of the International Action Network on Small Arms (IANSA) campaign in May 1999 was to control small arms with the help of civil society organizations. IANSA membership includes Human Rights Watch, OXFAM, Amnesty International, Physicians for Social Responsibility, Comic Relief, People and Planet, and the Asian Brotherhood Concern. The efforts for arms control by these civil society organizations culminated in a decision made by the First Committee of the UN General Assembly on 10 October 2006 to commence work on such a treaty. Russia and China abstained from voting and the US was the only government to vote against the movement. However, 139 governments voted to open negotiations on the treaty.

The civil society organizations are involved in arms control movements but due to the unresponsive attitude from the powerful governments, it is difficult to control arms and is one of the important challenges for nuclear disarmament. However, there are some international anti-nuclear movements and organizations which worked side by side with national or local anti-nuclear movements for nuclear disarmament like Greenpeace, International Campaign to Abolish Nuclear Weapons (ICANW), Global Zero and International Physicians for Prevention of Nuclear War (IPPNW).

The UN General Assembly adopted a historic resolution on 23 December 2016 that determined to “negotiate a legally binding instrument to prohibit nuclear weapons, leading towards their total elimination” and encouraged all member states to participate. The resolution got 113 states in favor, 35 against, with 13 abstentions. As expected the US, England and France will not join talks on a nuclear weapons ban treaty starting at New York this week because these three states are more committed to the nuclear non-proliferation treaty. It is interesting to note that Japan, the only state which suffered nuclear attack also voted against the talks. Russia, India and Pakistan are among the abstentions. However, India changed its stand and has officially announced that it will not participate in the nuclear weapons abolition treaty. The reason is simple; most of states believe nuclear weapons as a symbol of power and status.

What are the reasons that western nuclear states skip from joining the talks on prohibition of nuclear weapons? The answer is North Korea’s nuclear arsenal as the US Ambassador, Nikki Haley told the reporters that “There is nothing I want more for my family than a world with no nuclear weapons. But we have to be realistic. Is there anyone that believes that North Korea would agree to a ban on nuclear weapons?” However, one can easily understand that it was these declared nuclear states that paved an easy way for nuclear proliferation due to their flawed policies like Nuclear Non-Proliferation Treaty (NPT) of 1968 which was discriminatory in nature. That is the reason North Korea and Iran withdrew from the NPT after finding the treaty inappropriate.

If these declared nuclear states mostly the US were really concerned about nuclear proliferation and peace, then they have not implemented the flawed policies like NPT and CTBT, which speak of only horizontal and not of vertical proliferation. The US is reluctant to ratify the CTBT and is busy in building nuclear arsenal by computer simulation then why it is unreasonable to go nuclear for other states. The executive director of the International Campaign to Abolish Nuclear Weapons, Beatrice Fihn, said in a statement: “It is disappointing to see some countries with strong humanitarian records standing with a government which threatens a new arms race.”

The veto power is utilized to fulfill the interest of the five permanent members of the UN Security Council. It is interesting to note that the US government has cast at least eleven votes in relation to resolutions regarding Israel, reflecting so-called ‘Negroponte doctrine’ stated by Damien Rogers. The UN Security Council (UNSC) decisions or peace keeping operations does not suggest that it is working unanimously because there is a mismatch of operating peacekeeping forces in conflict areas between the UNSC permanent members. For instance, in areas like Southern Ossetia, Chechnya, Tibet, and Northern Ireland remain elusive among the members of the UNSC primarily because these areas fall within the spheres of influence of Russian Federation, China, and the UK respectively with each of having the veto power.

Nuclear weapons are not for conflict transformation, but merely a token of symbolicism of power. George Perkovich and Acton James in their essay, “Abolishing Nuclear Weapons” argued that it needs largely the political will to abolish nuclear weapons. The pledges for nuclear disarmament which has been taken by respective leaders should be implemented for example the Mikhail Gorbachev’s call for nuclear abolition in 1986, Rajiv Gandhi’s speech to the United Nations on nuclear disarmament in 1988 and the US president Barack Obama’s call in 2009.

The nuclear weapons states have to participate in every disarmament conference and peace movements like UN General Assembly’s call for abolition of nukes. The Landmines Ban Treaty in Ottawa, Canada in 1997 was not attended by all states and the states like the US, China, Israel and India refused to do so. The illegal multilateral intelligence sharing and cooperation network should be banned. For instance, Proliferation Security Initiative (PSI) which is endorsed by Russia, France, the UK and the US is the promoter of the PSI.

It is very difficult to reach and eliminate nuclear weapons at one time. However, the states have to find a solution for nuclear disarmament as they itself know how expensive and risky it is for them to handle nuclear weapons. Moreover, nuclear accidents and unauthorized use of nuclear weapons does not provide assured retaliation and may thereby weaken deterrence stability.

Therefore, it is need of an hour that super powers first try to settle the unresolved disputes and then move towards reduction of arms. Moreover, it is not only responsibility of nuclear states to make efforts for nuclear disarmament, the non-nuclear weapons states should also unite each other to provide a platform where all nuclear states will sit together to formulate such policies that will win hearts of all states. The civil society can play a leading role in arms reduction by pressurizing their respective governments to disclose information about nuclear arsenals. The anti-nuclear activists and NGOs should unite together to organize seminars about the accountability of nuclear weapons. Every citizen has a right to know about the governance of nukes of their respective states. Otherwise, the time is not far when weak or underdeveloped states will channelize their resources in the wrong directions and will curse us with more deadly weapons.

*Rameez Raja is a Ph. D Scholar at Jamia Millia Islamia, New Delhi. His specialization is India’s Nuclear Policy. This article was published on April 1, 2017 in Rabwah Times. (IDN-INPS | 2 April 2017)