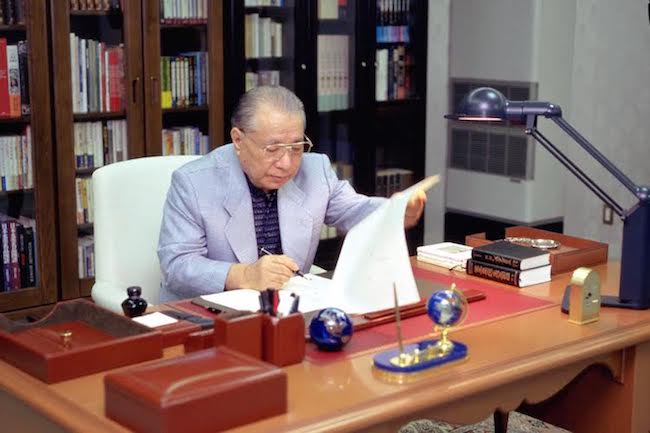 NEW YORK (IDN) – An eminent Buddhist philosopher and peacebuilder, Dr. Daisaku Ikeda, has expressed regrets that the Japanese government did not participate in the first session of the UN Conference to negotiate a nuclear ban treaty, and urged it to work with the Netherlands in the second session from June 15 to July 7, thus making "a unique and vital contribution to the success of the negotiations".

The centerpiece of negotiations is “a legally binding instrument to prohibit nuclear weapons, leading towards their total elimination.”

Dr. Ikeda, who is also president of the Tokyo-based Soka Gakkai International (SGI), said in an email interview with IDN in May: "Japan has a profound historical responsibility and mission as the only country to experience the use of nuclear weapons in war. I have strongly encouraged recognition of that fact and urged Japan to participate actively in the negotiating conference. It was thus extremely regrettable that the Japanese government did not participate in the first session."

The representatives of 130 countries, more than two-thirds of the UN member states, as well as many representatives of global civil society attended that session – "a very welcome development, as was the very constructive tone of the debate on the broad outlines of a treaty".

The chair of the conference, Ambassador Elayne Whyte Gómez of Costa Rica, expressed her hope that a treaty text can be completed and adopted by the last day of the second negotiating session in July.

With an eye of the second session, the SGI president said: "Japan has a special mission and responsibility to deepen and enhance debate on the question of what is actually necessary to achieve a world without nuclear weapons and to help forge a path to that goal. So I strongly hope that the Japanese government will return to this starting point and will decide to participate in the second session of the negotiations."

He added: "Japan should work with The Netherlands, who participated in the March conference as a country under the (NATO) umbrella of extended nuclear deterrence, in order to bridge the differences between the nuclear-weapon and non-nuclear-weapon states, in this way making a unique and vital contribution to the success of the negotiations."

According to the SGI president, it is crucial that as many countries as possible participate in the forthcoming session of the negotiations. "This of course includes the nuclear-weapon states and the states that rely on them for extended deterrence – states that were almost entirely absent from the first session. We need to remember that the sharply divergent viewpoints do not make dialogue impossible; they make it necessary."

There are a number of concerns – such as recognition of the catastrophic consequences of any use of nuclear weapons and concern about the risks of an accidental or unintended nuclear detonation – that are fundamentally shared by all states, including the nuclear-weapon states and their nuclear-dependent allies, Dr. Ikeda told IDN.

He added: "This is something that was affirmed in the Final Document adopted by the 2010 Review Conference of the Parties to the Treaty on the Non-Proliferation of Nuclear Weapons (NPT). With such shared recognition of concerns as the basis, debate should center on the NPT Article VI-stipulated obligation to achieve nuclear disarmament. There should be an effort to clarify the points of convergence between the security concerns of each state and the goal of a world without nuclear weapons."

Dr. Ikeda expressed the hope that "the second session will, like the first, provide opportunities for open debate with participation of civil society, and that the drafting of a nuclear weapons prohibition treaty will proceed as a shared global undertaking with an eye to adoption by the end of the session."

SGI is one of the many voices from government and civil society representatives who attended the first session expressing the strongly held determination to reach agreement on a treaty.

In fact, in recent years, the SGI has been working with the International Campaign to Abolish Nuclear Weapons (ICAN), other NGOs and the representatives of different faith communities in a movement to realize the adoption of a treaty outlawing nuclear weapons.

"The spiritual wellsprings for the SGI’s efforts can be found in President Toda’s declaration," said Dr. Ikeda, referring to his mentor, second Soka Gakkai president Josei Toda, who issued on September 8, 1957 a declaration calling for the prohibition and abolition of nuclear weapons.

Toda stated before a gathering of 50,000 that nuclear weapons were an absolute evil and a fundamental threat to the right of the world’s people to existence.

"In doing so he was declaring that their use was impermissible – for any reason, under any circumstance," said Dr. Ikeda, adding: "He further stated that this was to be the foremost of his teachings, and that he was bequeathing to us – the youth of that era – the task of creating a new current of history that would lead to the prohibition and abolition of nuclear weapons. Since that time, I have embraced this as my mentor’s legacy and have worked tirelessly to forge a path toward a world without nuclear weapons."

To commemorate the 60th anniversary, the SGI is planning to hold a youth summit for the renunciation of war in Japan's Kanagawa Prefecture, a coastal prefecture just south of Tokyo, where Toda issued his declaration calling for the prohibition and abolition of nuclear weapons. This will bring together youth representatives from many regions, including young people from Hiroshima, Nagasaki and Okinawa in Japan.

"It is my earnest hope that the youth summit in Kanagawa will contribute to the realization of this goal," added Dr. Ikeda.

He welcomed that against the backdrop of a heightened awareness of the inhumane nature of nuclear weapons, negotiations on a nuclear ban treaty have finally been initiated at the UN.

The adoption of such a treaty would clearly establish the international norm prohibiting the use of nuclear weapons – without any exception or recognition of mitigating circumstance, added Dr. Ikeda. "Such a treaty would resolve the lack of an explicit legal prohibition against nuclear weapons that was one of the focal points of the 1996 Advisory Opinion of the International Court of Justice."

In order to ensure the success of the treaty negotiations, and also to secure the effectiveness of a treaty once adopted, Dr. Ikeda said, it is vital to bring together and give concrete form to the voices and concerns of civil society, in particular the young people who strongly desire the end of the era of nuclear weapons. [IDN-InDepthNews – 14 June 2017]