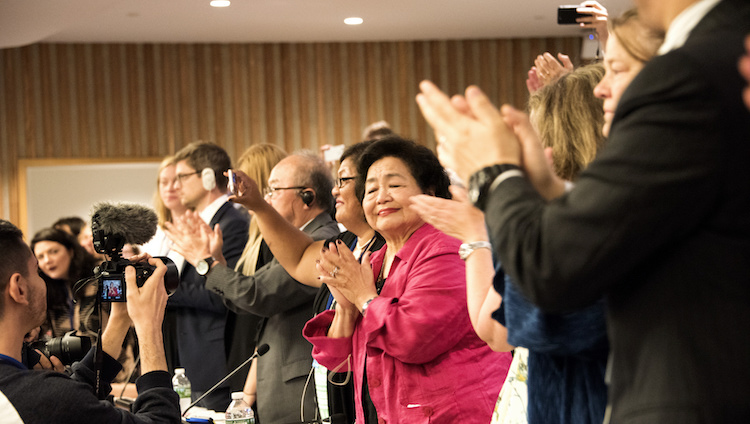 Twenty-five years after UN Secretary-General Boutros Boutros-Ghali opened the doors for the CSOs and other non-governmental organisations (NGOs) to contribute to the success of the Earth Summit in June 1992 that stressed the inexorable link between environment and development, the CSOs have successfully exercised their 'soft power' to help usher in a world free of nuclear weapons. [P 10]  | JAPANESE TEXT VERSON PDF｜SPANISH

It was not surprising therefore that conference president Whyte Gómez and one delegate after another commended the vital role civil society organisations have played in the UN adopting a treaty to prohibit nuclear weapons, thus marking an important step toward their eventual elimination.

One of the leading CSOs that has been working for a nuclear-weapons-free world for a decade is the International Campaign to Abolish Nuclear Weapons (ICAN). Its Executive Director, Beatrice Fihn, said: “We hope that today marks the beginning of the end of the nuclear age. It is beyond question that nuclear weapons violate the laws of war and pose a clear danger to global security."

Until now, nuclear weapons were the only weapons of mass destruction without a prohibition treaty, despite the widespread and catastrophic humanitarian consequences of their intentional or accidental detonation. Biological weapons were banned in 1972 and chemical weapons in 1992. "It is time for leaders around the world, she added, to match their values and words with action by signing and ratifying this treaty as a first step towards eliminating nuclear weapons."

The treaty also creates obligations to support the victims of nuclear weapons use (known in Japanese as “hibakusha”) and testing and to remediate the environmental damage caused by nuclear weapons.

Finh noted that as has been true with previous weapon prohibition treaties, changing international norms leads to concrete changes in policies and behaviors, even in states not party to the treaty. “The strenuous and repeated objections of nuclear-armed states is an admission that this treaty will have a real and lasting impact,” she said.

Commenting the adoption of the treaty, David Krieger, President of the Santa Barbara-based Nuclear Age Peace Foundation (NAPF), said: “This is an exciting day for those of us who have worked for a world free of nuclear weapons and an important day for the world . . . What this represents is humanity finally standing up for sanity and its own survival 72 years into the Nuclear Age.”

This effort to ban nuclear weapons has been led by the International Campaign to Abolish Nuclear Weapons . . .The movement has benefitted from the broad support of international humanitarian, environmental, nonproliferation, and disarmament organizations that have joined forces throughout the world, added Krieger.

While the United States chose to boycott the negotiations, their repeated objections demonstrate that this treaty has the potential to significantly impact U.S. behavior regarding nuclear weapons issues, noted Krieger. "Previous weapon prohibition treaties, including the Chemical Weapons Convention and the Anti-Personnel Mine Ban Convention, have demonstrated that changing international norms leads to concrete changes in policies and behaviors, even in states not party to the treaty."

Rick Wayman, Director of Programs at NAPF, said, "This treaty on the prohibition of nuclear weapons is truly a joint effort between the majority of the world's countries and many dedicated non-governmental organizations."

Echoing similar sentiments, Hirotsugu Terasaki, Director General of Peace and Global Issues of Soka Gakkai International (SGI), said: "We have long worked toward the abolition of these most inhumane of weapons, and would like to express our deepest respect to all the hibakusha, governments, UN and other international organizations and nongovernmental organizations around the world who have made dedicated efforts to realize this treaty." SGI is a lay Buddhist organisation based in Tokyo.

The adoption of this treaty is a concrete step toward the realization of a world without nuclear weapons, the common wish of all humanity, Terasaki said, adding: "The next challenge will be to make the significance of the treaty widely understood, and to ensure broad and solid support going forward. We strongly hope that nuclear-weapon states and nuclear-dependent states who did not participate in this conference will come to work with us in this global endeavour to create a world free from nuclear weapons."

Terasaki pointed out that SGI President Daisaku Ikeda urged back in September 2009 the need for 'Building Global Solidarity Toward Nuclear Abolition'. This year marks the 60th anniversary of the Declaration Calling for the Abolition of Nuclear Weapons made by Soka Gakkai president Josei Toda in September 1957, in which he described nuclear weapons as an absolute evil. "It is of great significance for us that a treaty prohibiting these weapons has become a reality at this time," added Terasaki.

Kimiaki Kawai, SGI Director of Peace and Human Rights, who was in New York participating in the final session of negotiations at the UN, commented: “The adoption of this treaty feels like a momentous step forward. Even if the nuclear-weapon states and most nuclear-weapon dependent states have not participated, the moral norm has been declared very clearly, with the united will of the world’s people behind it. Nuclear weapons in any hands are wrong.”

Another leading organisation that has actively participated in the negotiations at the United Nations in New York is the International Committee of the Red Cross (ICRC). "Today, the world has taken an historic step towards de-legitimising these indiscriminate and inhumane weapons, which is a crucial basis for their future elimination," said ICRC President Peter Maurer speaking in Geneva.

"The agreement is an important victory for our shared humanity," he added. For too long nuclear weapons have remained the only weapon of mass destruction not explicitly prohibited in international law. The treaty adopted today fills this gap."

Speaking at the negotiations, the Head of the ICRC's Arms Unit, Kathleen Lawand, praised States for reaching agreement. She said, "The treaty will reinforce the stigma against the use of nuclear weapons. Yet, we know that the adoption of this treaty by itself will not make nuclear weapons disappear overnight. Our collective work is far from complete."

Daryl G. Kimball, Executive Director of the Arms Control Association, said: "The new Treaty on the Prohibition of Nuclear Weapons marks a new phase in the seven-decade-long effort to prevent nuclear war...The treaty also requires states to provide assistance to those affected by nuclear weapons use and testing."

While the treaty itself will not immediately eliminate any nuclear weapons, Kimball added, it can, over time, further delegitimize nuclear weapons and strengthen the legal and political norm against their use.

In his view, the new Treaty aims to reinforce the key disarmament component (Article VI) of the 1968 NPT, which requires its 190+ states parties to “pursue negotiations in good faith on effective measures relating to cessation of the nuclear arms race at an early date and to nuclear disarmament".

Under the new treaty, states may not “test” nuclear weapons or any other nuclear explosive devices. Kimball said: "This simply reinforces the 1996 Comprehensive CTBT, which "prohibits any nuclear weapon test explosion or any other nuclear explosion” and has been signed by 183 states, including the United States, Russia, the U.K. France, and China. [IDN-InDepthNews – 10 July 2017]