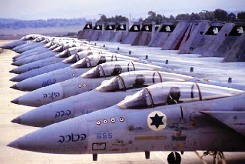 The topic is taboo because Israel maintains a veil of “studied ambiguity” on its alleged nuclear arsenal.

At the Notre Dame hotel in Jerusalem, the singular get-together took place: Ziad Abu Zayyad, former head of the Palestinian delegation to the Arms Control and Regional Security (ACRS) multilateral talks; Dan Kurtzer, former peace mediator and former U.S. ambassador to Israel and Egypt; and young and veteran activists against the proliferation of WMDs.

Mordechai Vanunu, also present, is forbidden to speak to foreigners or leave Israel.

Invoking his opposition to WMDs, the former nuclear technician revealed in 1986 details of his country’s alleged nuclear weapons programme to the British Sunday Times. Abducted by Mossad intelligence agents, the Israeli whistleblower spent 18 years in an Israeli jail, including more than 11 in solitary confinement.

“Ten years ago, we couldn’t even have a conference disembodied from reality,” notes an enthused Kurtzer.

This is no longer pie in the sky, but a very public event on an issue forcibly kept out of the public eye in Israel.

The conference was organised by the Palestine-Israel Journal (PIJ), a joint civil society publication dedicated to the quest for peace in the region.

“Track-Two diplomacy will have an effect on Track One, formal diplomacy,” explains the diplomat who is now a professor of Middle East policy studies at Princeton University. “If not this year – next year or the year after.”

The conference was held just a few days prior to the start of Round Two on Thursday Nov. 7 between Iran and the P5+1 group of six major powers (Britain, China, France, Russia and the United State, plus and Germany). Round One ended on a positive note.

Notwithstanding the persistent suspicion that Iran is racing towards nuclear arms, the only major player in the Middle East which, allegedly, possesses a nuclear arsenal is Israel.

Allegedly, because reports on the issue – all from foreign sources – have neither been confirmed nor denied by Israel. Maintaining its veil of “studied ambiguity”, Israel hasn’t signed the Nuclear Non-Proliferation Treaty.

Israel’s nuclear policy is defined in one sentence: ‘Israel won’t be the first to introduce nuclear weapons in the Middle East.’

“If Israel won’t be the first, it won’t be the second either,” quips Israeli non-conventional weapons expert Reuven Pedatzur.

A presentation on “Fissile Material Controls in the Middle East” by Princeton University’s Senior Research Physicist Frank von Hippel proposes a ban on plutonium separation and use; an end to the use of highly enriched uranium (HEU) fuel; an end to enrichment of uranium above six percent; and no additional enrichment plants.

It’s only natural that Israel’s nuclear programme would take centre stage. The Dimona nuclear plant is scrutinised. “Freeze, declare, and then step-by-step reduction of Israel’s stocks of plutonium and HEU,” is what Israel must give in return for von Hippel’s global proposal.

Yet despite across-the-board harmony on the need to free the world’s most volatile region from the most volatile weapon, the speakers failed to reach a consensus on the practicality of focusing on the region’s one and only country believed to have nuclear arms.

“This excellent proposal is premature,” comments Pedatzur. “Dealing with Israel’s nuclear programme is a non-starter. If the U.S. will exert pressure on Israel, maybe; unfortunately, I don’t see any U.S. incentive.”

Kurtzer chimes in: “The U.S. is specifically interested in stopping nuclear weapons proliferation. Regarding Israel, we’re back to the question of non-declared status, and the U.S.’ strong bilateral relationship, a fact of life.”

Israel focused on the regional security component; Arab states (led by Egypt) on the arms control component – that is, on controlling Israel’s suspected nukes. The talks collapsed in 1995.

Secure in its don’t-talk-about-it comfort zone, Israel is ready to discuss a WMD-free zone and thus forgo the ultimate deterrent against its so-called eternal enemies, but only within a comprehensive peace settlement with all of its neighbours, including Palestine, Syria and Iran.

That’s a state of affairs as hypothetical as it is improbable.

“Israel wants the international community to agree de facto to its nuclear status,” bemoans Abu Zayyad. “Assuming it’s out of it, Israel isn’t against a nuclear-free Middle East. That’s ridiculous.”

Abu Zayyad reflects the traditional Palestinian position. Both the nuclear weapons issue and the peace vision must be approached “correlatively, not sequentially.”

Is there a linkage between or amongst these issues?

“The formal answer of diplomats is ‘No’,” says Kurtzer. “But surely, as the debate takes place in a civil society forum like this one without being cut off – here’s the linkage.”

Israel rejects any linkage between its nuclear programme and the nascent regional détente.

“A Russian-American agreement to move the chemical weapons from Syria; Iranian and U.S. presidents speaking for the first time since 1979; Palestinian-Israeli negotiations,” enumerates Hillel Schenker, PIJ co-editor with Abu Zayyad. “This creates a constructive background for moving forward toward a WMD-free Middle East,” he concludes.

Kurtzer says “To the extent the U.S. is ready to exercise its influence and power, a regional security breakthrough can occur which will ease the way for us not only to have a discussion on the possibility of a WMD-free Middle East, but to actually start engaging on these issues.”

Abu Zayyad advocates a global arrangement. “When you speak about Israel, Israel speaks about Iran; Iran about Pakistan; Pakistan about India, etc.” – the nuclear chain.

The conference may have succeeded in breaking through the censorship surrounding Israel’s assumed nuclear weapons, but not the taboo on Israel effectively creating a WMD-free Middle East. [IPS | November 7, 2013]