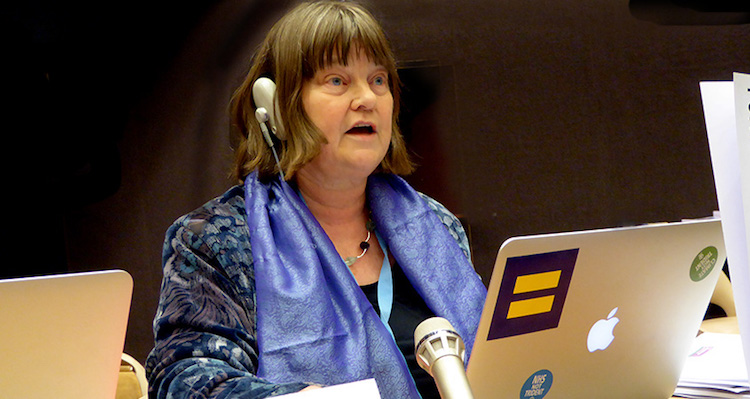 Dr Rebecca Johnson is founding President of the International Campaign to Abolish Nuclear Weapons (ICAN) and director of the Acronym Institute for Disarmament Diplomacy. She contributed this viewpoint as foreword to the publication titled 'Toward A World Without Nuclear Weapons' published by the International Press Syndicate Group with IDN-InDepthNews as its flagship agency, and the Global Cooperation Council as part of a media project with Soka Gakkai International (SGI). – The Editor.

LONDON (IDN) – If we survive this turbulent period, histories may record that 2017-18 marked the end of the nuclear age and the beginning – we hope – of a new era of peace-building and security. JAPANESE

For far too long petty nationalisms have weaponised an aggressive notion of masculinity, rewarding violent behaviour with power, conquest and material wealth. Empires rose and fell, as patriarchal dominators poisoned and distorted the land, air and seas of the planetary habitat we all need to share. Nuclear weapons, capable of destroying all life on Earth, were treated as instruments of political authority, status and – bizarrely – security.

Now, with the UN's historic Treaty on the Prohibition of Nuclear Weapons (TPNW), negotiated, adopted and opened for signature last year, we have a new tool to change the patriarchal, mass destructive mind-set and save our world. If we are to survive, we need to transform our understanding of what constitutes security – not more weapons and national divisions, but more education and international sharing of resources and responsibilities to enable peaceful, sustainable ways of living.

The 2017 Nuclear Prohibition Treaty is the first multilateral nuclear treaty since the UN General Assembly adopted the Comprehensive Test Ban Treaty (CTBT) in September 1996. It comes fifty years after the 1968 Non-Proliferation Treaty (NPT) was concluded. Like them, it derives its legal, moral and normative force from the risks, dangers and humanitarian consequences of nuclear weapons. Its 21st century understanding of security are enshrined in its recognition of victims' rights, the gendered impacts of nuclear technologies and radiation, and its highlighting of the importance of women's contribution to sustainable disarmament, peace and security.

Today's world is still divided by wars and violence, with unscrupulous arms manufacturers and dealers profiteering from conflicts, pain and misery. But step by step, civil society movements have persuaded UN Members to create agreements and mechanisms to outlaw and eliminate the most inhumane weapons systems, from landmines to cluster munitions, from biological to chemical and now, finally, nuclear weapons.

These Treaties, which synthesize humanitarian law and disarmament, stigmatise the weapons and create normative and legal pressures to loosen the national-military justifications so that they can be banned and eliminated. Once the TPNW enters into force – and ICAN is aiming to achieve the requisite 50 ratifications by 2020 – the moral recognition that using nuclear weapons constitutes a crime against humanity will become a legal reality, as it is for the use of chemical and biological weapons.

That legal reality becomes a potent tool for implementing the Treaty and deterring individual and institutional violators. The TPNW does not just ban the use of nuclear weapons but also "assisting" in prohibited acts leading to nuclear use, threats, acquisition, proliferation and deployment. Because the TPNW has clarified the legal responsibilities for everyone – states, companies and individuals – it is already eroding the financial and political incentives that have sustained nuclear programmes in the past.

The nuclear-armed states failed to derail the Treaty negotiations, but some are still declaring that they will never join. Such attempts to discredit and dismiss new treaties are familiar. Experience demonstrates that the more that we, the people, use these treaties to diminish the status and incentives that drive militarist ambitions, the stronger these legal, normative tools become. When citizens challenge nuclear proliferators in the courts and risk averse banks and companies pull out of investing, governments are forced to think again.

Our biggest challenge at the moment is that media in the major nuclear-armed states and NATO are colluding with those governments by ignoring the TPNW or pretending that it is somehow not a real treaty. We have to educate them to understand that the TPNW is real and here to – a multilaterally negotiated, substantive legal tool to accomplish the long-promised objectives of nuclear disarmament.

Recognising that each state has different political and military conditions, the TPNW provides two basic legal mechanisms by which nuclear-armed and nuclear-dependent (umbrella) states can choose the most appropriate way to join and remove nuclear weapons from their arsenals and security policies. Verification can likewise be developed and adapted as most appropriate to particular states and changing conditions, times and technologies.

For all these reasons, the TPNW has the potential to become a very effective tool for moving forward with nuclear disarmament in areas that have seemed intractable, such as the Korean Peninsula, Middle East, South Asia and Europe. It's time to make it work. [IDN-InDepthNews – 20 June 2018]