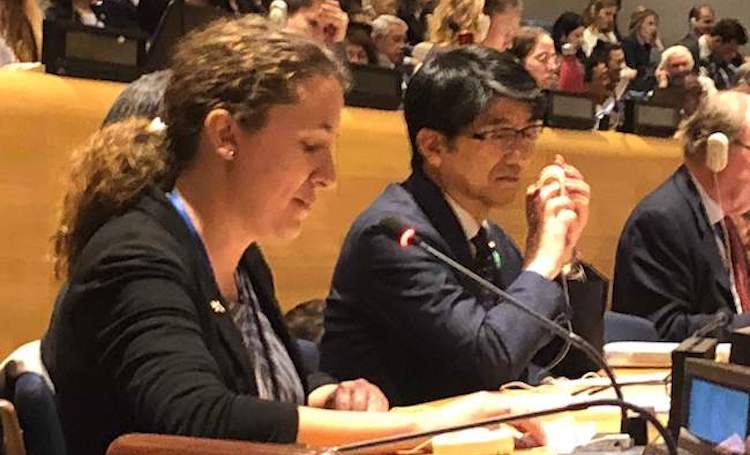 NEW YORK (IDN) – Heed the voices of the world’s hibakusha, survivors of atomic bombings, by unequivocally recommitting to achieving a world without nuclear weapons, by supporting the signing and ratification of the Treaty on the Prohibition of Nuclear Weapons (TPNW). [2019-05-04] JAPANESE

Fifty-three groups and individuals of diverse faiths have joined forces to sound a clarion call to States parties also to actively assist victims and remediate contaminated environments and to engage in international cooperation and assistance to affected communities.

As people of faith, they also urge countries to recognize that all effective measures are mutually reinforcing and advancement in each area supports advancement in others. The entry into force of the TPNW; the entry into force of the Comprehensive Test Ban Treaty (CTBT); halting the production and eliminating global stockpiles of fissile materials; and irreversibly dismantling global nuclear weapon production architecture.

They also call for ending programs designed to increase the accuracy and versatility and lower the threshold for use of nuclear weapons. Among other effective global measures in their view are: eliminating nuclear weapon stockpiles. These are global undertakings, fully compatible with and contributing to the realization of the objectives and commitments of the Nuclear Non-Proliferation Treaty (NPT).

As people of faith, they urge countries to recognize that there are core prohibitions common to the NPT and the TPNW such as those against the transfer of nuclear weapons, against assisting other states in acquiring nuclear weapons, etc. These, they say, can be supported regardless of a state’s position toward the TPNW.

"We encourage all States to engage in constructive dialogue regarding the strengthening of such prohibitions as a concrete and practical step toward fulfilling the obligation of all States Parties to the NPT to pursue nuclear disarmament," said a diverse group of faith-based organizations and individuals committed to a nuclear-weapon-free world in a joint statement on May 1 in New York.

The joint statement, issued at the third session of the Preparatory Committee for the 2020 Review Conference of the Parties to the Nuclear Non-Proliferation Treaty, was read by Emily Welty of World Council of Churches (WCC) on behalf of the group, 'Faith Communities Concerned about Nuclear Weapons', during the session for statements from civil society.

The statement endorsed by 53 groups and individuals of Christian, Muslim, Hindu and Buddhist affiliations reads: “We share and value the basic human right to live in a world free from the fear of total destruction, in an environment free from contamination. The indiscriminate and destructive capacity of nuclear weapons makes them wholly incompatible with our faith traditions and requires our consistent advocacy for their total and complete elimination. We believe in the power of people of goodwill to work for a better world, to shape policy and institutions so that they foster the fullness of life and support human dignity. The growing support for the TPNW has given us great cause for joy and enhanced hope for humanity.”

This is the eleventh statement of its kind since April 2014. To date, the group has issued interfaith statements on the occasion of international conferences on the humanitarian consequences of nuclear weapons, the NPT PrepCom, UN General Assembly and the UN conference that negotiated the TPNW.

Mary T. Yelenick, Pax Christi International NGO Representative to the UN, commented: "Our faith calls us, and empowers us, to refuse to be held hostage by forces of violence, destruction, and despair. While our various faith traditions may, in certain respects, differ, all recognize the essential interrelatedness of all people, and all of creation."

Humankind, and the earth itself, she went on to say, are precious, fragile gifts that we must actively honour and protect. "Nuclear weapons constitute an existential threat to our viability not only as a species, but as a planet. The looming threat of violent extinction of all that we know and love compels us, as people of faith, hand in hand, to speak out, and to act – forcefully and firmly – until the horrific threat posed by these monstrous weapons is no more.”

Kimiaki Kawai, Director,Peace and Human Rights, Soka Gakkai International (SGI), added: "Individual efforts for dialogue can help counter the human tendency toward self-centeredness and willful blindness to interdependence, a tendency that is most destructively manifested in nuclear weapons. Anybody can play a role in eliminating nuclear weapons."

SGI Buddhist association links over 12 million practitioners around the world. It has been engaged in efforts to promote the abolition of nuclear weapons for over sixty years.

The full text of the statement and list of 53 groups and individuals of Christian, Muslim, Hindu and Buddhist who endorsed the statement can be found here. [IDN-InDepthNews – 04 May 2019]