The Challenge of Nuclear Submarine Proliferation

By J Nastranis and Tariq Rauf 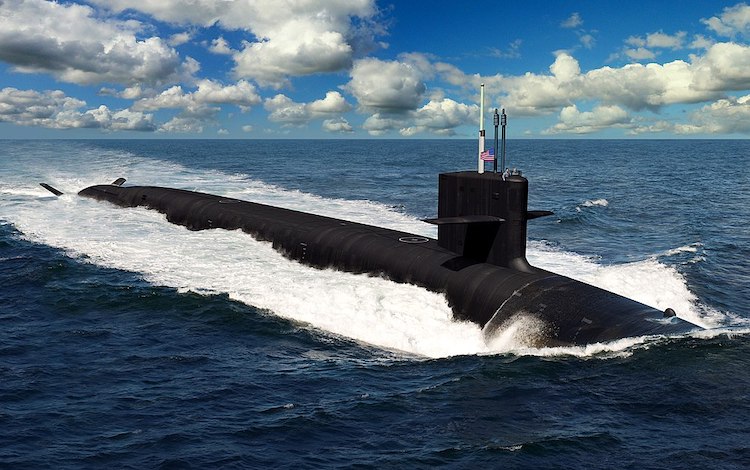 NEW YORK (IDN) — While many well-meaning experts have written legal, policy and technical tomes on how to verify naval nuclear fuel and to convert such fuel from weapons-grade highly-enriched uranium (HEU) to low enriched uranium (LEU), the unfortunate reality remains that none of the nuclear navies using HEU is interested in converting to LEU fuel or to allow International Atomic Energy Agency (IAEA) or any other inspectors within a Scandinavian mile of their nuclear fleets—that is a generous 10 kilometres. [2021-11-27-18] CHINESE | JAPANESE TEXT VERSION PDF | KOREAN

The United States Navy pioneered naval nuclear ship propulsion reactors and their fuel based on HEU starting with the Nautilus nuclear-powered attack submarine (SSN). On January 17, 1955, under the command of Captain Eugene Wilkinson, USS Nautilus (SSN-571) made the first voyage of a nuclear vessel, powered by a 70 MWth (S2W) pressurized water reactor (PWR) built by the Westinghouse Electric Company. Wilkinson flashed the historic message, “Underway on Nuclear Power” to Commander Submarine Forces Atlantic. This revolution in marine propulsion and naval technology continues to this day.

Unfortunately, proliferation of nuclear-powered and nuclear-armed submarines already has taken place. It was the Soviet Union that in 1986 became the first State to “lease” a (Charlie-class) nuclear cruise missile submarine to India. Then, in February 2004, Russia “leased” an Akula-class fast nuclear attack submarine to India. And, in 2019, India “leased” yet another Akula-class fast attack nuclear submarine from Russia to be transferred by 2025.

Reportedly, India copied design information from the Akula-class SSN for building its own nuclear submarines, whose reactors are of Russian design provenance and reportedly built with substantial Russian help. As an aside, it might be recalled that all 22 of India’s pressurized heavy water reactors (PHWRs) operational or under construction are unauthorized copies or derivatives of the Canadian-supplied CANDU PHWR.

Between 1962 and its withdrawal from service in 1970, the Savannah cruised for nearly half-a-million nautical miles under power drawn from a 74MWth pressurized water reactor fuelled by a total of 74 kilograms (163 pounds) of 4% enriched Uranium-235 uranium oxide fuel—the cost of the reactor and fuel was US$28.3 million.

Germany had the Otto Hahn launched on October 11, 1969, Japan the Mutsu launched in 1991; the Soviets launched the Sevmorput on February 20, 1986—after a refit in 2016, the Sevmorput remains in service today. It is powered by a KLT-40 pressurized water reactor (for ice breakers) rated at 135 MWth, with a score of 150 kilograms (332 lb) of highly enriched uranium. The 150 MWth KLT-40S variant is currently used in the Russian floating nuclear power station Akademik Lomonosov. The KLT-40S small-medium reactor (SMR) uses 14% LEU fuel on a three-year refuelling cycle.

There were unconfirmed reports that the secretive small team headed by the Biden administration’s national security advisor (Jake Sullivan) did not consult the US Navy in advance of making the announcement to provide fast-attack nuclear-powered guided-missile submarines (SSGNs) to the RAN—the Royal Australian Navy.

The problem the IAEA is facing relates to the exemption from safeguards of naval nuclear fuel regardless of whether it is Australia or any other non-nuclear-weapon State with an INFCIRC/153 (Corr.) type safeguards agreement in force. Not only is there not any definition or interpretation of the paragraph 14 exemptions, nor of what is meant by “non-peaceful” and “non-proscribed” military activities; let alone any understanding of, or procedures to, implement paragraph 14 provisions.

For the three partner States of a trilateral security pact between Australia, the United Kingdom and the United States (AUKUS) for the Indo-Pacific region announced on September 15, 2021—to take it upon themselves to interpret and to define paragraph 14 exemptions, with or without the IAEA Secretariat’s involvement, cannot command confidence without adequate consultations involving interested Member States and experts.

Implementation of paragraph 14 derived safeguards exemptions necessarily must first be discussed in consultations or negotiations involving all interested Agency Member States to arrive at common understandings that can be put before the Board for its consideration and approval. Australia or AUKUS is not being singled out; the matter is bigger and broader than them and concerns all Agency Member States and the Secretariat.

By creating within the NPT/IAEA regime a new system of pre-or non-NPT types of arrangements under which a State can operate two parallel nuclear programmes, one under and one outside IAEA safeguards, Australia would be weakening the uniformity of the structure and implementation of comprehensive Agency safeguards in NPT NNWS and in practice emulating India, a State not party to the NPT, having one part of its nuclear activities under safeguards and another outside.

Should Australia be able to exempt weapon-grade highly-enriched uranium-based naval fuel from Agency safeguards, then why not others such as, for example, Argentina, Brazil, Canada, Iran, Japan and South Korea?

For many years Brazil has been avoiding concluding an additional protocol with the IAEA citing its naval nuclear propulsion research and development programme. Both Brazil and Iran have claimed that one requirement for their uranium enrichment activities is the possibility of acquiring nuclear-powered submarines.

Reportedly, the AUKUS States have communicated to the IAEA Director-General their intention to provide a fleet of SSGNs to the Royal Australian Navy. This means that at some future time Australia could be invoking paragraph 14 of its NPT safeguards agreement to exclude significant quantities of highly-enriched uranium for naval nuclear fuel—up to 1600 to 2000 kg or more of weapon-grade HEU.

Australia’s acquisition of SSGNs under AUKUS could well open up a Pandora’s Box of proliferation as other non-nuclear-weapon States such as Argentina, Brazil, Canada, Iran, Japan, Saudi Arabia and South Korea among others, and even Taiwan (China), may feel emboldened to develop or acquire nuclear-powered ships or submarines and keep nuclear fuel (both low- and highly-enriched uranium) outside the scope of IAEA comprehensive safeguards.

The AUKUS States apparently have initiated non-transparent and secret discussions with the IAEA on how best to take advantage of a “grey area” or “loophole” in IAEA comprehensive safeguards to exclude weapon-grade highly-enriched uranium from Agency safeguards. There is no clear and agreed understanding and interpretation of the technical and policy modalities on the interpretation and implementation of this “grey area”.

China and the Russian Federation already have launched diplomatic fusillades across the bow of the Agency’s Board of Governors criticising the AUKUS plan for providing nuclear-powered submarines to Australia. Many Western Group States intimidated by the pressure and influence by the AUKUS alliance seem to be taking a back seat and waiting to see the colour of any agreement cooked up by the AUKUS States and the Agency.

Thus, giving Australia the benefit of doubt and showing sympathy for the US’ confrontation with China. The Non-Aligned States (NAM) have not yet shown their hand, but many are caught in a Catch-22 situation fearful of both not antagonizing China and not antagonizing the US and its Asia Pacific partners.

Now is the time to further strengthen the effectiveness and improve the efficiency of the IAEA safeguards system, not to weaken it and not drive a fleet of nuclear-powered submarines through it. [IDN-InDepthNews – 27 November 2021]

Note: This article is based on Tariq Rauf's extensive article

Photo: An artist rendering of the future U.S. Navy Columbia-class ballistic missile submarines. The 12 submarines of the Columbia-class will replace the Ohio-class submarines which are reaching their maximum extended service life. It is planned that the construction of USS Columbia (SSBN-826) will begin in the fiscal year 2021, with delivery in the fiscal year 2028, and being on patrol in 2031. Source: Wikimedia Commons