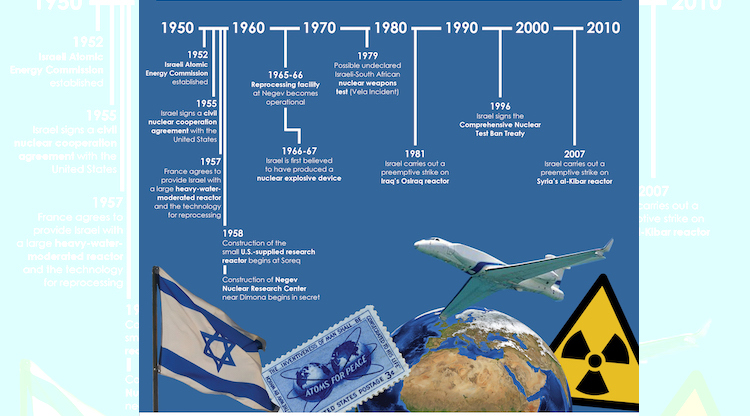 Speaking at the second “UN Conference on the Establishment of a Middle East Zone Free of Nuclear Weapons and other Weapons of Mass Destruction (WMDs),” which took place November 29 to December 3, UN Secretary-General António Guterres pointed out that the five existing zones include 60 per cent of the UN’s 193 Member States—and cover almost all of the Southern Hemisphere.

“Expanding such zones to more regions will strengthen global nuclear disarmament and non-proliferation norms and contribute to building a safer world.”

That is particularly the case in the Middle East, where concerns over nuclear programmes persist, and where conflicts and civil wars are causing widespread civilian casualties and suffering, undermining stability and disrupting social and economic development, he warned.

Alyn Ware, Director of the Peace and Disarmament program at the World Future Council, told IDN the UN Conference on the Establishment of a Middle East Zone Free of Nuclear Weapons and Other Weapons of Mass Destruction (WMDFZ) is a vitally important process to address the very real concerns about actual and/or potential nuclear, chemical and biological weapons programs in the Middle East.

Amongst the countries in this region:

Israel has not joined the nuclear Non-Proliferation Treaty and is believed to have produced nuclear weapons; neither Egypt nor Israel have ratified the Chemical Weapons Convention CWC); Syria is believed to have violated the CWC through the use of chemical weapons; and a number of countries have not signed the biological weapons convention, including Comoros, Djibouti and Israel.

The UN conference, he pointed out, shines a light on these issues, and contributes to political pressure to curtail the WMD programs in the region and achieve signature and ratification of the relevant treaties.

The process will not be easy, he warned.

“There are intense conflicts in the region that have sometimes erupted into armed conflict, and which continue to undermine trust and thwart diplomatic efforts to achieve such a zone. But the very fact of initiating the UN Conference is an important start. It provides opportunities for states in the region to share perspectives, consider proposals and approaches, and give diplomacy an opportunity to work,” Ware noted.

He said the conference is open-ended—with a mandate provided by General Assembly decision A/73/546 to continue meeting annually, ‘until the conference concludes the elaboration of a legally binding treaty establishing a Middle East Zone free of nuclear weapons and other weapons of mass destruction.’

“This was a wise move by the UN, in order to allow time for all states in the region to become engaged in the process. Only one state in the region (Israel) has not joined the UN conference”.

Their lack of participation, he said, doesn’t necessarily mean that no progress can be made. “Indeed, a lot can be done to discuss the legal, technical and institutional requirements to establish such a zone, at the same time as a diplomatic dialogue is advanced with Israel on what arrangements could be made to bring them into the process,” he noted.

Tony Robinson, Operations Director, Middle East Treaty Organization, told IDN the second UN Conference on a WMDFZ in the Middle East is already paving the way forward toward establishing such a zone.

Having 22 countries of the Arab League and Iran around the negotiating table is fantastic, he said. The only regional country absent was Israel but there is no reason why those in the room can't make progress in a process that Israel can then join at any time.

The political declaration that came out of the 1st session shows that states of the region can achieve consensus and build on areas of common ground. Until this conference was set up there was no dedicated forum for countries of the region to discuss major security issues—including WMD disarmament’, Robinson said.

“This annual conference will continue to take place until all regional countries agree to a WMD Free Zone treaty. And by coming back year after year to this conference and organizing work between the sessions, it will build trust and confidence among the regional countries—giving more reasons for Israel to also join. Obviously, it's not going to happen overnight, but all dialogue among these countries must be welcomed and the process itself protected,” he noted.

As this conference started, so too did the talks in Vienna to revive the Joint Comprehensive Plan of Action (JCPOA)—(a nuclear agreement between Iran and Western powers). A breakthrough in Vienna will not only make sure Iran’s nuclear program remains peaceful and US crippling sanctions are removed but also reinforce the importance of dialogue and diplomacy.

Meanwhile, said Robinson, the region is also going through some key changes with renewed efforts among Gulf States to engage in dialogue with one another to Israel's recent agreements with four Arab states, which all goes in a positive direction of increased engagement and reducing tensions in the region.

“While this conference contributes positively towards establishing the Zone, there are other parallel processes that are complementary, with progress on any or all moving us closer to the goal. Specifically, the decades old process within the NPT that is dedicated and vital to establishing the Zone.”

“So, we believe that the conference in New York for the Zone that is within the NPT. There is no doubt that countries of the region, in their statements to the NPT RevCon will report on the progress made," declared Robinson.

The Treaty of Tlatelolco (Latin America NWFZ), for example, was adopted on such a basis at a time when Cuba, Brazil and Argentina were not ready to join. (They have now joined). All this points to the high value and importance of this UN process, he pointed out.

“In addition, progress on advancing a Middle East Zone free of nuclear weapons and other WMD is critical for the stability of the nuclear Non-Proliferation Treaty.”

In 1995, Ware said, the NPT was extended indefinitely on agreement by states parties on achieving a Middle East NWFZ, amongst other things. To not take action in implementation of these commitments could erode confidence in the NPT and lead to some states considering withdrawal.

(a) Welcome all initiatives, resolutions, decisions and recommendations on the establishment of a Middle East zone free of nuclear weapons and other weapons of mass destruction;

(b) Believe that the establishment of a verifiable Middle East zone free of nuclear weapons and other weapons of mass destruction would greatly enhance regional and international peace and security;

(c) Declare our intent and solemn commitment to pursue, in accordance with relevant international resolutions, and in an open and inclusive manner with all invited States, the elaboration of a legally binding treaty to establish a Middle East zone free of nuclear weapons and other weapons of mass destruction, on the basis of arrangements freely arrived at by consensus by the States of the region;

(d) Call upon all States of the Middle East and all other States to refrain from taking any measures that preclude the achievement of the objectives of the establishment of a Middle East zone free of nuclear weapons and other weapons of mass destruction;

(e) Convinced that the realization of this long-standing goal would be facilitated by the participation of all States of the Middle East, extend an open-ended invitation to all States of the region to lend their support to the present declaration and to join the process;

(f) In that spirit, we believe that the Conference, through the elaboration of a legally binding treaty establishing a Middle East zone free of nuclear weapons and other weapons of mass destruction, could contribute to building regional and international confidence therein;