By Mayors for Peace

The following is the text of an Open Letter Issued by Mayors for Peace to NPT States Parties. 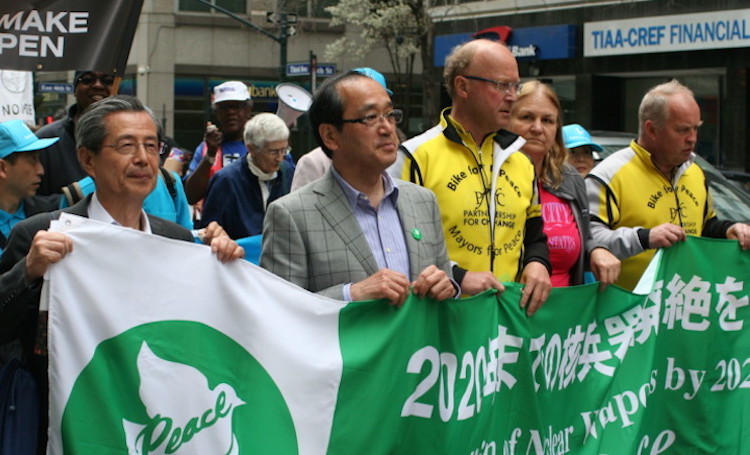 HIROSHIMA (IDN) — On behalf of Mayors for Peace, a global non-governmental organization with 8,059 member cities, we are writing to express our views prior to the NPT Review Conference that will open next January in New York.

We urge all participants to recall the solemn historical circumstances facing this conference. The use of nuclear weapons in Hiroshima and Nagasaki had catastrophic humanitarian consequences. [2021-12-18]

World leaders recognized then that a new global institution was needed to replace the League of Nations, which failed to prevent World War II. They created the UN to maintain international peace and security and the General Assembly’s first resolution set the goal of nuclear disarmament, which became a legal obligation of NPT Parties in 1970.

We wish to convey our deep concern over recent developments that seriously jeopardize prospects for achieving the great disarmament goals of this treaty, especially those found in Article VI:

- With new nuclear arms races underway, and tensions between nuclear-armed States rising to levels not seen for decades, the danger of nuclear war, by accident, miscalculation or design, is real and growing. These tensions are at their highest since the Cold War.

- We are dismayed that over the 51 years since the treaty entered into force, the nuclear-weapon States have not even begun to outline how they will jointly negotiate to eliminate their nuclear weapons, despite the treaty’s requirement for such negotiations in good faith.

- In the face of a tragic pandemic and the global economic disruption it has caused, we are deeply disappointed that vast military expenditures are continuing to grow, while basic human needs and the special needs of cities remain unaddressed.

Given these concerns, we must go back to the very basics, and reaffirm our collective duty to pursue the human ideal of a peaceful world without nuclear weapons. Now is the time to do so and here what is most needed:

- We strongly encourage States Parties to address directly the real face of nuclear weapons—their catastrophic humanitarian impact—and to make this defining aspect of these weapons a subject for discussion at the Review Conference and an urgent priority to promote through public education.

- We call on the States Parties to reaffirm all disarmament commitments made in the NPT (Article VI and preamble) and the consensus final outcome documents of the 1995 review and extension conference and the 2000 and 2010 Review Conferences. We further urge the States Parties to undertake a collective pledge to take concrete measures to implement these commitments within a designated time frame.

- We urge the States Parties to examine the implications of the dangerous and immoral doctrine of nuclear deterrence for the future of the treaty, especially Articles I and VI. We also believe that technological innovation has made nuclear weapons and deterrence an even greater threat to humanity and that it is long overdue for an NPT Review Conference to undertake a comprehensive discussion of such weapons and their associated doctrine.

- We believe that nuclear risk reduction measures are legitimate only when they are tied to concrete progress in disarmament. We call on the nuclear-weapon States to implement initiatives to make substantial and concrete progress aimed at reducing the risk of nuclearweapons use, as referred to in the “P5 Conference Paris, 2-3 December, 2021 Final Joint communiqué.”

- We urge the States Parties to recognize that the prohibition norm of the TPNW is indispensable in fully implementing Article VI and that the two treaties are fully compatible and mutually reinforcing.

Mayors for Peace hopes and expects that the States Parties will be able to achieve a consensus on the Final Document at this particular Review Conference. We remain a firm supporter of the NPT and extend our best wishes for a successful Review Conference in overcoming old obstacles and inspiring a brighter future for all. [IDN-InDepthNews – 18 December 2021]