A New Cold War Between Russia and The West Is Unnecessary 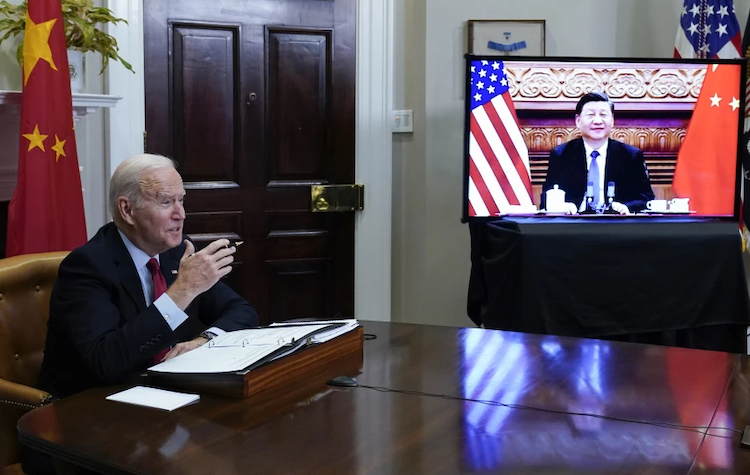 LUND, Sweden (IDN) — George Orwell, the author of “Animal Farm”, the satire on how a dictatorship can slowly but steadily evolve in a democratic society, and “1984”, a novel about a future dystopian dictatorship, was the first person to use the phrase “Cold War” in a 1945 newspaper article, written just after the nuclear bombing of Hiroshima and Nagasaki. [2021-12-21]

He argued that “the surface of the earth is being parcelled off into three great empires, each self-contained and cut off from contact with the outer world, and each ruled, under one disguise or another, by a self-elected oligarchy. He counted the US and Western Europe as one, the Soviet Union as the second and China as the third. He concluded that “the atomic bomb is likely to put an end to large-scale wars at the cost of prolonging indefinitely a peace that is no peace”.

I think he got it nearly right, or so it seems as a new Cold War begins to erupt between the West and Russia, and China spars with the US over Taiwan, the South China Sea and its islands. Of course, it’s more complicated than that. China and the US are, I think, doing nothing much more than annoying each other and the bonds of commerce, finance, deadly virus eradication, global warming and student exchanges bind both the elites and the populaces close together.

To me, the idea of a new Cold War with Russia and adding China today is nonsense on stilts. Even more, the original one.

George Kennan, the former US ambassador to Moscow and the famed author of a Foreign Affairs article on how to contain the Soviet Union, always insisted, as most contemporary historians do, that Stalin had no intention of rolling his tanks into Western Europe.

Robert Legvold summarizes Kennan’s views in his interesting book, ‘Cold War’, “The threat the Soviet Union posed was political, a threat accentuated by these countries’ vulnerability to Soviet subversion because of their economic frailty and political instability- a threat requiring a political and economic response, not a military one”.

In 1948 Kennan wrote, as he observed the creation of NATO, “Why did they [Western leaders] wish to divert attention from a thoroughly justified and promising program of economic recovery by emphasizing a danger which did not actually exist, but which might be brought into existence by too much discussion of the military balance and by the ostentatious stimulation of military rivalry?”.

It was Kennan, backed by people like Robert McNamara, (who was the Secretary of Defence under both Presidents John Kennedy and Lyndon Johnson and a committed bomber in the Vietnam war) who told President Bill Clinton that he was expanding NATO in defiance of many promises to President Mikhail Gorbachev made by both US and European leaders and that this was the worst of all possible mistakes, the worst in the history of twentieth-century diplomacy.

Those who say that these promises were never made haven’t done their homework. US ambassador to the Soviet Union, Jack Matlock, who was in the room when US Secretary of State James Baker promised the Soviet Union’s President Mikhail Gorbachev that Nato would only expand in Eastern Germany, says these pro-NATO-expansion voices are misinformed or just lying.

Now NATO's membership has expanded up to Russia’s border and NATO troops are deployed ever closer. Moreover, the anti-ballistic missile system now being installed to ward off a supposed Iranian attack could be deployed against Russia, and their warheads nuclearized. Such a deployment would allow a rocket to strike Moscow within four minutes or less of launch.

We forget that both Gorbachev and President Vladimir Putin at one time visualized Russia becoming part of the European Union. We forget that Russia returned to being a Christian-inspired nation that also gave religious freedom to Islam and others. We forget the time under President Boris Yeltsin when he pushed hard to remove the barriers to human rights. We forget the progress made under Gorbachev, Yeltsin, Dmitri Medvedev, and Putin in reducing the armoury of nuclear arms.

With the Americans they have reduced stockpiles from 70,000 to 16,300. This ended the US-Russian race between offensive and defensive strategic nuclear programs. Russia with the US has eliminated whole categories of weapons. They have worked together securing nuclear weapons and materials in Russia. They have placed limits on large standing armies in Europe while introducing transparency and mutual trust into their operations. (This is crumbling since the Russian interference in Ukraine.)

We forget when Medvedev was president, he published in 2008 a well thought out, multi-dimensional, plan to enhance European security. Legvold says, “The US and Europe brushed it aside”.

In Ukraine the US and the EU self-defeatingly walked away from a compromise arrangement they had worked out with President Victor Yanukovych that could have avoided further political upheaval. Today we overlook that Russia is committed to defeating ISIS more than it is committed to supporting the regime in Syria.

Rodrick Braithwaite, the former UK ambassador to Russia, wrote in his book, “For a decade Westerners lectured Moscow where its real interests lay, and expected it to follow where the West led. They rarely listened to what the Russians said in response. Russian concerns seemed unimportant, misguided or unacceptable”.

Is a new Cold War called for? Definitely not. Just some wise Western leadership. In the last few days Moscow has given the NATO countries an opening. According to today’s Financial Times, “Russia laid out its ‘red lines’ to NATO and the US last week, which included forthright demands for the western alliance to deny membership to Ukraine, seek consent from Moscow to deploy troops in former communist countries in Europe and avoid military deployments or exercises close to Russia’s borders.”

These are an echo of proposals made fourteen years ago by President Medvedev, which President Barack Obama summarily rejected without any negotiations—a grave mistake. The US and its NATO partners have agreed this time to discuss them. That is mild progress. But NATO must truly bite on these eminently sensible Russian proposals.

About the author: The writer was for 17 years a foreign affairs columnist and commentator for the International Herald Tribune, now the New York Times. He has also written many dozens of columns for the New York Times, the Washington Post, the Boston Globe and the Los Angeles Times. He is the European who has appeared most on the opinion pages of these papers. Visit his website: www.jonathanpowerjournalist.com [IDN-InDepthNews — 21 December 2021]