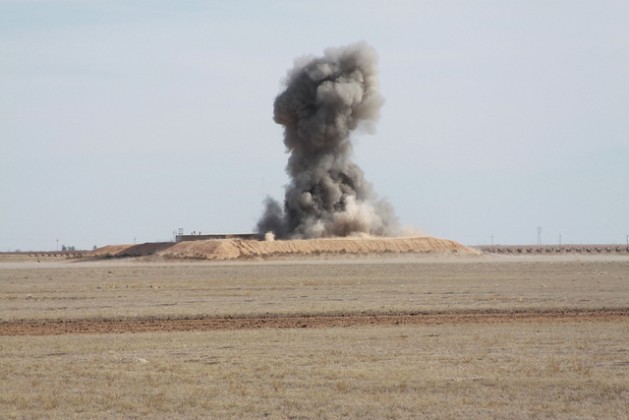 The study said the total number of nuclear warheads in the world is declining, primarily due to the United States and Russia continuing to reduce their nuclear arsenals.

“But this is at a slower pace compared with a decade ago,” the Yearbook said.

At the same time, both countries have “extensive and expensive” long-term modernisation programmes under way for their remaining nuclear delivery systems, warheads and production.

Roughly 1,800 of these weapons are being kept in a state of high operational alert.

“Despite renewed international interest in prioritizing nuclear disarmament, the modernisation programmes under way in the nuclear weapon-possessing states suggests that none of them will give up their nuclear arsenals in the foreseeable future,” says SIPRI Senior Researcher Shannon Kile.

Asked for her response, Alice Slater, New York director of the Nuclear Age Peace Foundation and who serves on the Coordinating Committee of Abolition 2000, told IPS the disheartening news from SIPRI’s report is that all nine nuclear weapons states are modernising their nuclear arsenals – and particularly the five major nuclear weapons states: the United States, Russia, UK, France and China.

All five countries, she pointed out, actually pledged, in the 1970 Non-Proliferation Treaty (NPT), which was extended indefinitely in 1995, “to pursue negotiations in good faith on effective measures relating to cessation of the nuclear arms race at an early date and to nuclear disarmament”.

Nevertheless, this disregard of promises given and repeated at successive five-year NPT review conferences – with the U.S., for example, projecting expenditures of one trillion dollars over the next 30 years for two new bomb factories, missiles, planes and submarines to deliver newly designed nuclear weapons – has given fresh impetus to an international campaign by non-nuclear weapons states to negotiate a treaty to ban the bomb, declaring nuclear weapons illegal and prohibited – just as the world has done for chemical and biological weapons, said Slater.

Besides the United States and Russia, SIPRI said the nuclear arsenals of the other nuclear-armed states are considerably smaller, but all are either developing or deploying new nuclear weapon systems or have announced their intention to do so.

In the case of China, this may involve a modest increase in the size of its nuclear arsenal, said SIPRI.

North Korea appears to be advancing its military nuclear programme, but its technical progress is difficult to assess based on open sources, according to the Yearbook.

Tariq Rauf, SIPRI’s director of the Disarmament, Arms Control and Non-Proliferation Programme, expressed disappointment over the failure of the review conference in which 161 states participated “with little to show for their effort.”

He said agreement on a final document was blocked by the United States, with the support of Britain and Canada – “their reason being that they were adamantly opposed to putting pressure on Israel to attend an international conference in March 2016 to ban nuclear, biological and chemical weapons and ballistic missiles in the region of the Middle East”.

Israel is the only country in the Middle East that has never joined the NPT and is reported to have nuclear weapons, he pointed out.

Other important issues discussed at the conference included the humanitarian impact of nuclear weapons (HINW), an initiative supported by 159 non-nuclear-weapon States drawing on the results of international conferences held in Oslo (2013), Nayarit (2014) and Vienna (2014) – where it was made clear that no State, no international relief organisation nor any other entity has the capacity to deal with the humanitarian, environmental, food and socio-economic consequences of a nuclear weapon detonation.

These States called for a legally-binding prohibition on nuclear weapons, such as the prohibitions on biological and chemical weapons.

The five declared nuclear-weapon States – China, France, Russia, the United Kingdom and the United States, also the veto-wielding members of the Security Council – rejected all such demands and firmly insisted that their nuclear weapons were not at any risk of accidental or deliberate detonation.

“Thus, an opportunity has been lost to push for a safer Middle East without weapons of mass destruction, and for steps leading to the global elimination of nuclear weapons – at least until the next five-yearly NPT Review Conference in held in 2020,” Rauf added.

No one should take any comfort in this, neither the 192 parties to the NPT nor the non-parties, India, Israel and Pakistan, because the dangers of nuclear weapons affect everyone on this planet, said Rauf, a former senior official at the International Atomic Energy Agency (2002-2012) dealing with nuclear verification, non-proliferation and disarmament.

Slater told IPS there has been a successful series of conferences with civil society and governments over the past two years – in Norway, Mexico and Austria – to address the catastrophic humanitarian consequence of nuclear war.

At the recent NPT, which broke up in failure without a consensus document, 107 nations signed on to a humanitarian pledge, offered by Austria, to “fill the legal gap” for nuclear disarmament.

She said South Africa was particularly eloquent, comparing the current regime of nuclear haves and have-nots to a form of “nuclear apartheid”.

After the 70th anniversary of the tragic destruction of Hiroshima and Nagasaki, it is expected that negotiations will begin, she said.

While some argue that this would be ineffective without the participation of the nuclear weapons states, great pressure will be brought to bear on the “weasel” states, who mouth their fealty to nuclear disarmament, while sheltering in military alliances under the U.S. nuclear umbrella, said Slater.

“One should expect more weakening of the nuclear phalanx, striding the world and holding us all hostage, as NATO states and Asian allies relying on U.S. nuclear deterrence feel the approbation of a vibrant grassroots campaign, around the world, working for a ban treaty,” said Slater. (IPS | 15 June 2015)