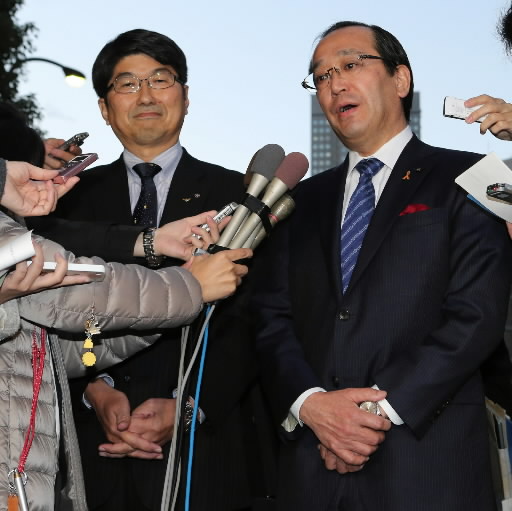 TOKYO (IDN) - In a message to the Peace Memorial Ceremony, to mark the 70th anniversary of the bombing of Hiroshima on August 6, UN Secretary-General Ban Ki-moon echoed the ardent wish of the survivors of nuclear assault, when he called for "urgent action to eliminate nuclear weapons once and for all". [P21] JAPANESE TEXT VERSION PDF | SWEDISH

Evoking the first resolution by the UN General Assembly, which reflected the international community’s concern about the use of atomic weapons, he urged states to honour the victims of Hiroshima and Nagasaki by realising the "vision of a nuclear-weapons-free world".

He recalled that towards the end of World War II, on August 6 and 9, 1945, the United States dropped atomic bombs on Hiroshima and Nagasaki. The two cities were destroyed and more than 200,000 people died of nuclear radiation, shockwaves from the blasts and thermal radiation. Over 400,000 have died since the end of the war, from the after-effects of the bombs.

The Mayors of Hiroshima and Nagasaki shared Ban’s views. They are keen that the younger generation keeps alive the memory of what transpired 70 years ago.

They also want the nuclear power states to abandon all nuclear weapons and Japan – as the only country to have suffered the havoc caused by atomic bombs – to act as a bridge between nuclear and non-nuclear states.

Nagasaki Mayor Tomihisa Taue pointed out that most of Japan’s population was made up of the post-war generation. The memories of war were fast fading from the society.

In view of this, he said: “We must not forget the atomic bomb experiences of those in Nagasaki and Hiroshima. Neither should we forget the air raids, which destroyed Tokyo and many other cities, the Battle of Okinawa, nor the many people of Asia who suffered because of this tragic war. Now, 70 years on, it is vital that we continue to pass on those memories.”

He asked those who experienced the atomic bomb and the war in Japan and across the globe to speak of their experiences, and not allow those memories to fade.

Addressing the young generation, he said: “I ask that you do not push wartime experiences aside saying that they are stories of the past. Understand that the wartime generation tell you their stories because what they speak of could, in the future, happen to you as well. Therefore, please inherit their wish for peace.”

He added: “Listen to stories of the war, sign petitions for nuclear abolition, and visit atomic bomb exhibitions. Together, these individual actions can create a much larger power.”

The Nagasaki Declaration on August 9 also highlighted the significant role the youth play: “In Nagasaki, the younger generation, which includes second and third generation hibakusha, are inheriting the wish for peace and are taking action. Our individual strengths are the greatest power in realizing a world without war and without nuclear weapons. The power of civil society is the power to move governments, and to move the world.”

Hibakusha is the Japanese word for nuclear “explosion-affected people”, who survived the atomic bombings.

By March 2015, the Japanese government had recognised 183,519 as hibakusha, most living in Japan. Japan’s Atomic Bomb Survivors Relief Law defines hibakusha as people who were: within a few kilometers of the hypocenters of the bombs; within 2 km of the hypocenters within two weeks of the bombings; exposed to radiation from fallout; or not yet born but carried by pregnant women in any of these categories.

Describing the state of the hibakusha, Kazumi Matsui, Mayor of the City of Hiroshima, said: “Those who managed to survive, their lives grotesquely distorted, were left to suffer serious physical and emotional aftereffects compounded by discrimination and prejudice. Children stole or fought routinely to survive. A young boy rendered an A-bomb orphan still lives alone; a wife was divorced when her exposure was discovered. The suffering continues.”

Against this backdrop, the Hiroshima and Nagasaki Mayors appealed for doing away with all nuclear weapons that are tools of mass destruction.

The Hiroshima Mayor Matsui pointed out that while the world was bristling with more than 15,000 nuclear weapons, policymakers in the nuclear-armed states remained trapped in “provincial thinking, repeating by word and deed their nuclear intimidation”.

This attitude persisted despite the fact that the international community was fully aware of “the many incidents and accidents that have taken us to the brink of nuclear war or nuclear explosions”. Meanwhile nuclear terrorism was also a source of great concern.

As long as nuclear weapons exist, he warned, anyone could become a hibakusha at any time. If that happens, the damage would reach indiscriminately beyond national borders. “People of the world, please listen carefully to the words of the hibakusha and, profoundly accepting the spirit of Hiroshima, contemplate the nuclear problem as your own,” he exhorted.

Matsui is president of the Mayors for Peace, a global grouping comprising more than 6,700 member cities. He assured: “Hiroshima will act with determination, doing everything in our power to accelerate the international trend toward negotiations for a nuclear weapons convention and abolition of nuclear weapons by 2020.”

This, he said, was the first step toward the abolition of nuclear weapons. The next step would be to create broadly versatile security systems that do not depend on military might but are based on mutual trust.

“Working with patience and perseverance to achieve those systems will be vital, and will require that we promote throughout the world the path to true peace pursued by the pacifism of the Japanese Constitution,” he added.

The Hiroshima Mayor called upon the Japanese government, in its role “as bridge between the nuclear- and non-nuclear-weapon states, to guide all states toward these discussions”.

Hiroshima has offered itself as the venue for dialogue and outreach.

Fix sights on the future

The Nagasaki Mayor Taue exhorted the Japanese Government and Parliament to fix their sights on the future, and consider a conversion from a ‘nuclear umbrella’ to a ‘non-nuclear umbrella’.

Like South Korea and Germany, and most of the NATO member states, Japan does not possess any atomic weapons and is protected by the U.S. nuclear umbrella.

Taue appealed to the Japanese Government to explore national security measures, which do not rely on nuclear deterrence. “The establishment of a ‘Northeast Asia Nuclear-Weapon-Free Zone (NEA-NWFZ),’ as advocated by researchers in America, Japan, Korea, China, and many other countries, would make this possible,” he said.

Referring to the Japanese Parliament “currently deliberating a bill, which will determine how our country guarantees its security”, he said: “There is widespread unease and concern that the oath which was engraved onto our hearts 70 years ago and the peaceful ideology of the Constitution of Japan are now wavering. I urge the Government and the Diet to listen to these voices of unease and concern, concentrate their wisdom, and conduct careful and sincere deliberations.”

The peaceful ideology of the Constitution of Japan, the Nagasaki Peace Declaration said, was born from painful and harsh experiences, and from reflection upon the war. “Since the war, our country has walked the path of a peaceful nation. For the sake of Nagasaki, and for the sake of all of Japan, we must never change the peaceful principle that we renounce war,” the declaration added.

The Nagasaki Mayor regretted that in the ‘Review Conference of the Parties to the Treaty on the Non-Proliferation of Nuclear Weapons (NPT)’ had ended without the adoption of a Final Document. However, the efforts of those countries, which were attempting to ban nuclear weapons, made possible a draft Final Document which incorporated steps towards nuclear disarmament,” he noted.

He urged the heads of the NPT member states not to allow the NPT Review Conference “to have been a waste”. Instead, they should avail of every opportunity to continue their efforts to debate a legal framework, such as a ‘Nuclear Weapons Convention (NWC),’ at every opportunity, also in the General Assembly of the United Nations.

Many countries at the Review Conference were in agreement that it is important to visit the atomic-bombed cities of Nagasaki and Hiroshima. Against this backdrop, the Nagasaki Mayor appealed to: “President Obama, heads of state, including the heads of the nuclear weapon states, and all the people of the world  . . . (to) please come to Nagasaki and Hiroshima, and see for yourself exactly what happened under those mushroom clouds 70 years ago.”

No U.S. President has since 1945 ever attended any event to commemorate the atomic bombings of Hiroshima. Undersecretary of State for Arms Control and International Security Rose Gottemoeller was the highest-ranking U.S. official at August 6 ceremony. She was reported saying that nuclear weapons should never be used again.

Widespread view in the U.S. is that the atomic bombings were necessary to bring Japan down to its knees and end the Second World War. But this view is being increasingly challenged, evoking the criticism, among others, of Gen. Dwight Eisenhower, the U.S. President from 1953 until 1961, and a five-star general in the United States Army during World War II, who served as Supreme Commander of the Allied Forces in Europe,

Eisenhower stated in his memoirs that when notified by Secretary of War Henry Stimson of the decision to use atomic weapons, he “voiced to him my grave misgivings, first on the basis of my belief that Japan was already defeated and that dropping the bomb was completely unnecessary”. [IDN-InDepthNews – 9 August 2015]