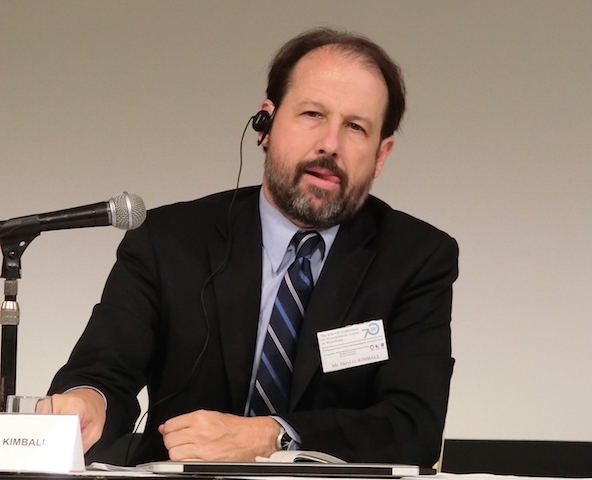 HIROSHIMA (IDN) - In the seven decades since the U.S. atomic bomb attacks on Hiroshima and Nagasaki, nuclear weapons have become less and less relevant to the security of possessor states and their allies and the potential harm of their further use has become even more harmful to international security and human survival.

Yet the threat of nuclear war remains. As President Obama said in June 2013 in Berlin: “ … so long as nuclear weapons exist, we are not truly safe.”

And thanks to the moving and inspiring testimonials of the hibakusha (survivors of atomic bombings) many of us have heard . . ., we are better able to understand why the use of nuclear weapons is inhumane and unacceptable under any circumstances.

To ensure the NPT and the broader global nuclear disarmament enterprise remains dynamic and effective, all states-parties must provide leadership and take action to fulfill the treaty’s lofty goals and aspirations.

Unfortunately, rather than help to advance the disarmament cause, the 2015 NPT review conference exposed the imperfections of the NPT and the divisions among key parties.

In addition, to the division on the Middle East Zone conference, the states-parties failed to produce an updated, meaningful action plan on disarmament that builds on the commitments they made at the 2010 review conference.

Although the recent downturn in U.S.-Russian relations and growing U.S.-Chinese tensions have made progress difficult, this does not excuse the NPT nuclear weapon states from their NPT Article VI disarmament commitments.

Without further U.S. and Russian nuclear reductions, until at least 2021, the United States and Russia will deploy more than 1,500 strategic warheads on several hundred bombers and missiles – far more than necessary to deter nuclear attack. If these weapons were used even in a “limited” way, the result would be catastrophic nuclear devastation.

Making matters worse, the United States and Russia are both modernizing their Cold War nuclear inventories, which will cost of several hundred billion dollars over the next ten years.

And North Korea continues its nuclear pursuits in violation of its earlier denuclearization pledges and the NPT and may conduct yet another nuclear weapon test explosion.

While they agreed to draft conference language outlining some useful new disarmament concepts, the nuclear weapon states did not come to the conference with significant new proposals for progress on disarmament, and they successfully brushed aside calls for new benchmarks and timelines on previous commitments.

In response, 114 governments joined an Austrian-led initiative known as the “Humanitarian Pledge,” which calls on states "to identify and pursue effective measures to fill the legal gap for the prohibition and elimination of nuclear weapons."

Some states and civil society campaigners interpret this to mean that negotiations on a treaty to ban nuclear weapons possession and use should begin.

A ban is a necessary step toward a world without nuclear weapons. Unfortunately, will not, by itself, change dangerous nuclear doctrines or eliminate nuclear arsenals of the world’s nuclear-armed states. It is not a panacea for the hard work and bold leadership necessary to change the status quo.

The following concepts and initiatives may help catalyze meaningful action:

As Henry Kissinger, Sam Nunn, William Perry, and George Shultz argued in an op-ed in 2013, a new multilateral effort for nuclear disarmament dialogue is needed.

I welcome . . . expression of support for pursuing the concept in the 2015 NPT draft conference document regarding an “open-ended working group” to “elaborate effective measures for the full implementation of Article VI of the treaty.” The working group could allow for the continuation of the discussions at the NPT Review Conference on disarmament and the introduction of practical new proposals for breaking the current deadlock.

Another, more impactful approach would be for a group of concerned states to organize a high-level conference involving the leaders of a representative group of 20-30 nuclear and nonnuclear armed states to a two- to three-day summit on the pursuit of a joint enterprise to achieve a world free of nuclear weapons.

The first such high-level meeting could be held in Hiroshima or elsewhere in Japan in 2016 on the margins of the G-7 Summit. Foreign Minister Fumio Kishida has opened the door to such a gathering with his very important invitation for other world leaders to visit Hiroshima at that time.

This could be an historic, new, and productive starting point to rejuvenate the nuclear disarmament effort. To bring all key states together is should be based on two principles: 1) a clear understanding of the humanitarian impact of the use of nuclear weapons; and 2) an objective assessment of the security concerns of states, including the threats posed by a range of nuclear risks.

For instance, the United States and Russia could jointly announce they will resume negotiations on a follow-on to the New START agreement, and/or one or more CTBT Annex II states could announce they have taken concrete steps to sign or ratify the treaty.

Such a summit could provide much-needed new momentum on disarmament.

Further nuclear reductions need not wait for a new U.S.-Russian arms control treaty. The United States and Russia could accelerate the pace of reductions under New START to reach the agreed limits before the 2018 deadline. As long as both sides continue to reduce force levels below the treaty limits, U.S. and Russian leaders could undertake parallel, verifiable reductions well below New START ceilings.

Other countries must get off the disarmament sidelines, particularly China, France, India and Pakistan, which continue to improve their nuclear capabilities. These states are all pursuing new ballistic missile, cruise missile, and sea-based nuclear delivery systems. In addition, Pakistan has dangerously lowered the threshold for nuclear weapons use by developing tactical nuclear weapons capabilities to counter perceived Indian conventional military threats.

To start, the world’s other nuclear-armed states should pledge not to increase the overall size of their stockpiles as long as U.S. and Russian reductions continue.

A unified push for further U.S.-Russian arms cuts, combined with a global nuclear weapons freeze by the other nuclear-armed states, could create the conditions for multilateral action on disarmament.

Next year will mark the 20th anniversary of the negotiation and the opening for signature of the Comprehensive Test Ban Treaty (CTBT).

In the interest of global security and out of respect for the victims and survivors of nuclear testing, it is past time to bring the treaty into force.

Despite statements of support for the CTBT from China and the United States, neither state has taken sufficient action to ratify the treaty. Stronger leadership from Washington and Beijing is overdue and necessary.

Other states must do their part too. Ratification by Egypt, Iran, and Israel – three other key CTBT holdouts – would also reduce nuclear weapons-related security concerns in the Middle East and help create the conditions necessary for the realization of a zone free of weapons of mass destruction – or in the very least, a nuclear weapons test free zone.

. . . We must respect the wishes of the hibakusha, and it is clear that one of their wishes is the CTBT. And, I agree with him that states cannot pick and choose which NPT commits they decide to meet . . .

Neither India nor Pakistan say they want to resume testing, yet their governments have failed to take a serious look at joining the CTBT, which, despite their protestations, is a non-discriminatory measure that would help reduce nuclear tensions throughout Asia.

Even if action by these states toward ratification begins soon, the entry into force of the CTBT is many years away, and it is vital that the international community seek ways to reinforce the global taboo against nuclear testing pending CTBT entry into force.

To do so, it would be wise for the members of the UN Security Council to consider the adoption of a resolution next year that determines that nuclear testing by any state is a threat to international peace and security. Or the key nuclear testing states could issue a joint statement underscoring their commitment to the CTBT and the test moratorium.

None of these options is easy or simple, but without fresh thinking and renewed action on the 70-year old problem of nuclear weapons, the risk of the further use of nuclear weapons use will grow. [IDN-InDepthNews – 27 August 2015]

*Daryl G. Kimball is Executive Director, Arms Control Association, based in Washington, DC. This article contains extensive excerpts from the remarks the author made at 25th United Nations Conference on Disarmament Issues, Hiroshima, Japan, on August 27, 2015.