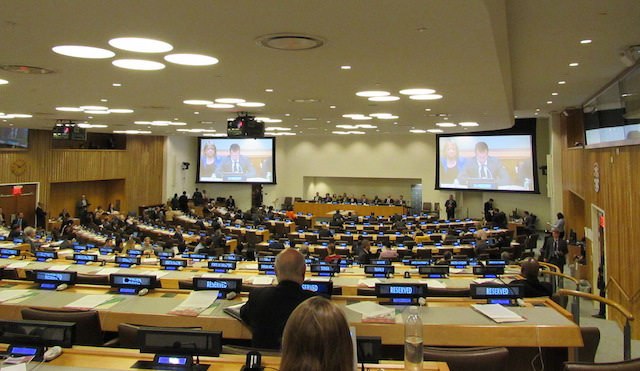 Idrissov was addressing the 9th Ministerial-level Conference on Facilitating the Entry into force of the Comprehensive Nuclear Test-Ban Treaty (CTBT) on September 29 at the United Nations headquarters in New York. He was co-chair with Japan’s Foreign Minister Fumio Kishida.

The Kazakh Foreign Minister warned delegates he would be “blunt, even undiplomatic” in pushing for a legally binding nuclear test-ban. “Our countries (Kazakh and Japan) have the moral right to be aggressive about abolishing nuclear weapons.”

Co-chair Kishida highlighted Japan’s historical role and obligation to work with the international community to ban nuclear tests and nuclear weapons, making particular reference to this year’s 70th anniversaries of the bombings of Hiroshima and Nagasaki and the experience of nuclear-bomb survivors, the Hibakusha.

The Conference, also known as the Article XIV Conference in accordance with the relevant Treaty article, adopted a Final Declaration, which affirms “that a universal and effectively verifiable Treaty constitutes a fundamental instrument in the field of nuclear disarmament and non-proliferation.”

Pope Francis backs such fervent appeals. He reminded the UN General Assembly delegates on September 25 that “there is an urgent need to work for a world free of nuclear weapons”.

Speaking at the opening of the Conference, UN Secretary-General Ban Ki-moon said that “the CTBT is essential to realizing our vision of a world free of nuclear weapons. It will help ensure that the international community is no longer forced to live in the shadow of nuclear weapons”.

He also promised: “As a former Chairman of the CTBT Preparatory Committee, I am personally committed to doing everything possible to see this Treaty enter into force,” adding jokingly that in line with his name  “spelled B-A-N, I am determined to ban any nuclear tests”.

CTBTO Executive Secretary Lassina Zerbo expressed his ardent wish that more be done and that Member States show real leadership in advancing the entry into force of the Treaty.

“2016 will mark twenty years since the CTBT was opened for signature. I don’t regard this as a reason for celebration. Almost twenty years later, we find ourselves at a conference provided for under Article XIV of the Treaty to accelerate entry into force,” Zerbo told IDN.

The Comprehensive Nuclear Test-Ban Treaty was opened for signature in 1996 and aims to put a cap on the development of nuclear weapons as well as prohibit all nuclear weapon test explosions worldwide.

But it has not entered into force because eight states have yet to ratify it. These are: China, Egypt, India, Iran, Israel, Pakistan, United States and Democratic People's Republic of Korea (DPRK). They are the remaining States from a list of 44 nuclear technology holders at the time of the final negotiations late 1990’s.

CTBT establishes a global network of monitoring facilities and allows for on-site inspections of suspicious events anywhere in the world. The overall accord contains a preamble, 17 treaty articles, two treaty annexes and a protocol detailing verification procedures.

The Kazakh foreign minister recalled that 24 years ago when the country became independent after the collapse of the Soviet Union, Kazakhstan had over 1,400 nuclear warheads. It was a nuclear weapon test site and hosted biological and chemical weapon production facilities.

“In our first decade of independence, we decided to dismantle all Soviet weapons systems and facilities and were at the forefront of signing important international nonproliferation treaties,” said Idrissov.

“We decided to help the world to become safer and that decision inspired others. Achieving a nuclear free world is a difficult task. As a young nation we want to inspire everyone. Both Japan and Kazakhstan suffered the ugliest effects of the militarism of nuclear weapons. The 500 nuclear tests that happened in Kazakhstan is a great reminder of the most devastating danger of this type of weapon,” he said.

Japanese Foreign Minister Kishida, Conference co-chair, recalled the 70th anniversary of the atomic bombing of Hiroshima, his hometown, and Nagasaki.

The banning of nuclear testing is an effective pillar in nuclear disarmament and CTBT has contributed to enhancing the norm of nuclear test ban, he argued. “We must accelerate our efforts towards the early entry into force of the treaty.”

Kishida also highlighted the need to promote further development of the International Monitoring System (IMS) and provide training for operators of the National Data Center that supports IMS.

IMS is a worldwide network that will help to verify compliance, detect and confirm violations of the CTBT. Today, the IMS is 80 percent complete and currently consists of 254 monitoring stations and 10 of the 16 radionuclide laboratories that have been certified.

In order the make the necessary preparations to implement the CTBT, a Preparatory Commission for the Comprehensive Nuclear Test-Ban Treaty Organization (CTBTO) was set up in 1996 in Vienna.

Zerbo agrees with the Kazakh Foreign Minister that a more “aggressive approach” is required. “They want to act constructively but in an aggressive manner to be able to get this treaty closed and to go beyond the normal diplomatic chart which is: we call upon all countries to ratify, wait two years and again go through the rhetoric. We need to have a concrete plan of action and a timeframe of what we want to achieve,” he added.

The Preparatory Commission for the CTBTO is intended to be created as soon as all nations ratify the treaty. However, Zerbo argues that even if the organization has not been officially created, they are already working accordingly as if it was an organization itself.

“We are a group of more than 400 people who are working effectively. We cannot continue engaging people, spending tax payers’ money, building such an infrastructure like the International Monitoring System and then say that it is not ready in entering into force,” the CTBTO Executive Secretary said.

Zerbo considers the year of 2006 as a landmark when they detected the DPRK nuclear test. “We proved to the international community that we can detect nuclear test explosion with efficiency. We have a framework that works effectively to provide States what was required under the treatment, that is, giving data, showing we can provide information that any nuclear test explosion would go undetected.”

According to Des Browne, member of the CTBT Group of Eminent Persons (GEM) and Vice-Chairman of the Nuclear Threat Initiative, the answer still lies in politics. While the U.S. was the first signatory (September 24, 1996) and one of the instigators of the treaty, it has not ratified due to domestic politics.

“Some barriers are related to international politics. In China’s case, they have made very clear they would ratify a minute after the U.S. does so. If we could break any of resistance in the Middle East countries, (the ratification) could come in a cascade effect. The same thing applies to India and Pakistan: it is about regional politics,” said Browne to IDN.

The U.S. Deputy Secretary of State Antony Blinken confirmed the country’s engagement in pushing the treaty to be approved by the Senate.

“Given the clear and convincing evidence we know that to enforce the comprehensive ban treaty is good for the security of the U.S. and it is good for the international security. It is a key step in diminishing world’s reliance on nuclear weapons and reduce the risk of a nuclear arm race,” Blinken said.

He added: “The U.S. is committed to the treaty and we are working aggressively to build the case at home for ratification. Other States should also be pursuing ratification and ensuring their plans for how they are doing so, there is no reason to wait on any country. CTBT is not an abstract concept for the theoretical world. It is a firm and a certain step to a peace and security for our own citizens and to our own people of the world.”

World history has proven that nuclear weapons are destructive and indiscriminate causing health and environmental impacts. For Nobuyasu Abe, Vice-Chairman at the Japan Atomic Energy Commission and also a member of GEM, people realize this kind of weapon shouldn’t be used anymore.

“If the U.S. thinks well and considers the long term benefits for the country they should support the ratification because such weapon can be hardly used. So why do you need to keep on testing? They do not need to test anymore; they have conducted 1,000 nuclear tests, the biggest number among the countries. That time is over. It will become a useless and unusable asset,” Abe told IDN.

A world free of nuclear tests and nuclear weapons is achievable by 2045, believes Des Browne. Thirty years ago, a meeting between U.S. President Ronald Reagan and his counterpart from the Soviet Union, Mikhail Gorbachev, proposed banning all ballistic missiles. This meeting took place in 1986.

“For ten minutes they opened up the possibility of a world free of nuclear weapons. I personally think that the state of politics at the moment has to be step by step but it is possible. It will happen unexpectedly. Things can change very quickly. I don’t think we failed at all,” Des Browne insisted. [IDN-InDepthNews – 30 September 2015]

Photo: A view of the ministerial meeting at the UN headquarters | Credit. Fabiola Ortiz