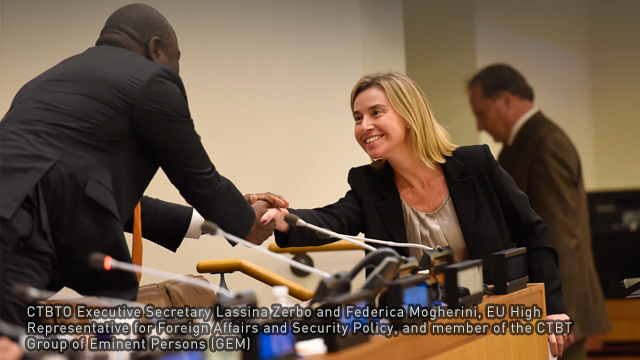 BERLIN (IDN) - With a view to promoting entry-into-force of the nuclear test ban treaty, the European Union (EU) has decided to increase its support to the Preparatory Commission of the Comprehensive Nuclear-Test-Ban Treaty Organisation (CTBTO) by contributing an additional amount of 3 million euros (about 3.9 million dollars). This brings the bloc’s voluntary financial contributions since 2006 to a total of some 19 million euros (nearly 21.5 million dollars). [P34]  GERMAN | JAPANESE TEXT VERSION PDF | NORWEGIAN

As a group, all 28 EU Member States have signed and ratified the Comprehensive Nuclear-Test-Ban Treaty (CTBT). The EU Member States’ regular contributions amount to around 40 percent of the CTBTO’s budget.

The CTBT plays a central role in underpinning the international non-proliferation regime and the efforts of the European Union (EU) towards global disarmament. “The EU is, therefore, strongly committed to the entry into force and universalisation of the CTBT,” the delegation of the European Union to the international organizations in Vienna stated in a press note on October 19, 2015. These contributions are in line with the EU Strategy against Proliferation of Weapons of Mass Destruction, the note said.

“The overarching aim of the European Council’s decision of October 12, 2015 is to further promote the universalisation and entry-into-force of the Treaty, which are two of the key objectives of the EU Strategy, but also contribute to the operation and sustainability of the CTBTO verification system as well as the development of its operational capabilities,” the press note explained.

A pertinent example that clearly demonstrates the relevance of the Treaty and the constantly improving performance of its verification regime, the EU added, can be seen in the detection of the nuclear tests by North Korea during the last years, and the prompt action of the CTBTO in this regard.

“Furthermore, the Organisation has repeatedly demonstrated its ability to effectively monitor compliance with the Treaty and to provide the international community with independent and reliable means to ensure compliance with it, once it enters into force,” the European bloc stated.

Responding to the EU decision, CTBTO Executive Secretary Lassina Zerbo said: “I believe that without the European Union's support we could not have reached the current well-advanced status in the build-up and operational capabilities of the CTBT verification regime.”

This, he added, includes the EU's help to developing countries to build capacities in CTBT verification technologies, thus getting buy-in from these countries into the world's largest and most sophisticated multilateral verification system, referred to by U.S. Secretary of State John Kerry as one of the great achievements of the modern world.

“As we prepare to mark 20 years since the opening for signature of the CTBT, the strong political and financial support of the EU are vital in ensuring continued progress toward achieving entry into force,” Zerbo declared.

The first part of the contribution aims to support the CTBTO’s network of monitoring stations the International Monitoring System (IMS). This includes assistance to countries hosting auxiliary seismic stations that need support (unlike for all other types of CTBTO monitoring stations, the upkeep and maintenance of this type of station is the financial responsibility of the host State).

Another project aims at enhancing the IMS capabilities to detect radioxenon, a radioactive noble gas emitted by nuclear explosions, but also by legitimate civilian activities such as medical isotope production. The contribution will fund both studies of global radioxenon background levels and developing a system to trap radioxenon emissions at the source.

Other projects under this heading include upgrades to the VDeC system, a portal that allows external researchers to access IMS data and International Data Centre Products, as well as upgrades to IDC software for analysing waveform (seismic, infrasound and hydroacoustic) data.

The contribution will allow the CTBTO to continue its capacity building programmes in developing countries, which has been an integral part of all previous EU voluntary contributions.

This support allows these countries to establish and maintain a National Data Centre, which is the data centre maintained in each CTBT Member State to receive monitoring data and products and to advise its government on events of interest. The capacity building efforts will focus on the NDC-in-a-box standard software package and on the regions of Middle East and South Asia, as well as Southeast Asia, the Pacific and Far East. [IDN-InDepthNews – 19 October 2015]

Japan and Kazakh to Facilitate Entry into Force of Nuclear Test-Ban Treaty
http://www.nuclearabolition.info/index.php/european/545-japan-and-kazakh-to-facilitate-entry-into-force-of-nuclear-test-ban-treaty