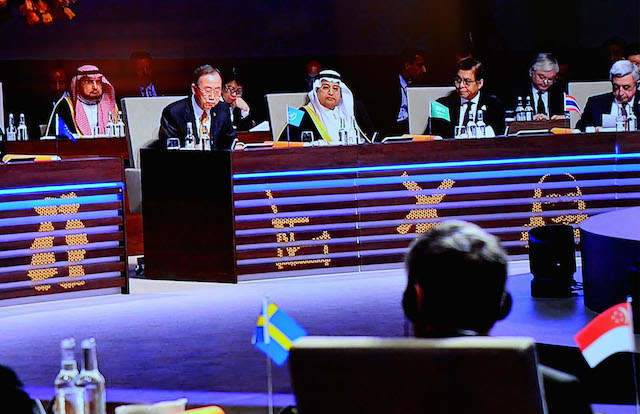 CAIRO (IDN) - When the U.S.-Iran nuclear deal was announced in July, the image in state-controlled Saudi media was of Western powers caving in to a new powerful neighboring foe. The usually reticent Saudi officials paid the usual diplomatic lip-service to the agreement but social media, academia and state-owned news outlet all portrayed a different picture; profound Saudi anxiety that included statements that the oil-rich country can use its wealth to go nuclear. [P36] ARABIC | GERMAN | JAPANESE TEXT VERSION PDF | NORWEGIAN | PERSIAN

“The kingdom can only look to itself to protect its people, even if it means implementing a nuclear program,” wrote Nawaf Obaid, Senior Fellow at the King Faisal Center for Research and Islamic Studies. A nuclear Iran, he said, "represents a state of extreme danger to multiple nations, but few more so than Saudi Arabia, which has long been Iran’s primary opponent in the Middle East power balance."

Ironically, the deal that alarmed the Saudis was designed to produce a different result. The framework would in fact gradually lift sanctions on Tehran for its agreement to cut back its stockpile of low-enriched uranium by 98 percent for 15 years and reducing its installed centrifuges. Yet, Saudi Arabia and other regional Gulf Arab allies saw the deal as nothing short of a dramatic shift of the balance of regional power.

Iran can use new streams of revenue to improve its conventional armament and expand its regional influence without losing any of its scientific, technological or nuclear edge over its over-indulgent wealthy Arab neighbors. After all, Arab capitals have long blindly trusted U.S. guarantees of Gulf security to the point where they neglected investment in scientific development and relied heavily on massive arms purchases from the U.S. that sat to collect dust in storage houses.

Iran's unprecedented projection of military power and influence in neighboring Iraq and Syria along with Iranian backing of Yemeni Houthi rebels only vexed the Saudis more. Little wonder more Saudi pundits are screaming at the top of their voice they can and will go nuclear. To seal it all, the Obama administration appears to them as if Washington is renegading on its security pledges.

“I think the Obama Administration has done a terrible job of creating a regional security strategy,” said Jeffrey Lewis, professor at the Middlebury Institute of International Studies at Monterey. “It is not surprising that allies and partners would be expressing discomfort with what they see as strategic drift.  Most Saudis are alarmed at the deterioration in regional security and believe that the Obama Administration is inept.”

“I am reluctant to conclude that the current unease is permanent until we see how the next Administration handles the regional and bilateral relationship,” he added.

For Middle East experts, the Saudis rarely vent their frustration publicly preferring to work behind the scene or clandestinely. But this time the Saudi media responded to the deal with stories upon stories describing Saudi Arabia's missile forces in striking detail as well as its nuclear ambitions.

Riyadh already has a nuclear programme. In 2011, it announced plans for the construction of sixteen nuclear power reactors over the next twenty years at a cost of more than 80 billion dollars. These would generate about 20 percent of Saudi Arabia's electricity, while other, smaller reactors were envisaged for desalination.

Recently, the French and the Saudis announced feasibility studies to secure contracts for two nuclear reactor facilities to be built by Areva, a French company. Deals with Hungary, Russia, Argentina and China are in the pipeline towards building reactors costing around 2 billion dollars each.

The King Abdullah Atomic Energy City (KACARE) has taken most matters into hand and it is said to be manned by young researchers imbibed with an ideology that sees Iran as the ultimate threat to their nation's existence.

The International Atomic Energy Agency (IAEA) is in close cooperation with Riyadh in developing a peaceful nuclear power programme and cancer treatment facilities at the King Faisal Specialist Hospital and Research Center.

But despite the newly-found motivation and initial endeavour, many Middle East experts agree that Saudi officials can wish all they want but they really cannot build a nuclear weapon. All they are doing is just dabbling in early nuclear energy research and making “noise'.

“So far that noise has not translated to anything concrete above and beyond talk, sometimes a loud talk,” said Avner Cohen, a researcher with the James Martin Center for Nonproliferation Studies.

Other obstacles remain before a Saudi nuclear programme. Saudi Arabia controls 16 percent of the world's known oil reserves yet it remains an authoritarian developing nation that lacks the educational and technological skills to develop nuclear warheads or ballistic missile technology.

Te Al-Saud family-run regime has long preferred to spend on the welfare state and pamper its citizens with luxury items rather than on developing profound scientific or personal skills.

"Saudi Arabia possesses only a rudimentary civil nuclear infrastructure, and currently lacks the physical and technological resources to develop an indigenous nuclear weapons capability,” said a recent report from the Nuclear Threat Initiative, a Washington-based NGO that works towards reduction of nuclear weapons.

To compensate for its lack of indigenous knowledge-based infrastructure, Riyadh, which routinely deploys its wealth to win international favours, had also assumed that forming an alliance with a nuclear power, such as Pakistan, would offer “purchased” protection. By showing generosity to the Pakistani or the Egyptian military, Riyadh can tap into the Pakistani nuclear programme and order bombs when it wants to, the theory went.

But a recent development showed the shortcomings of Saudi largesse. Pakistan balked at sending ground troops to fight in Yemen alongside the inexperienced Saudi soldiers; an episode that embarrassed Riyadh and showed the limits of its money-based security strategy.

Many nuclear arms experts who monitor the Middle East say that Saudi nuclear weapons “on order” is an allegation that has not been substantiated in any way.

“It can be done, but it seems very unlikely,” said Lewis. “ Most experts doubt that Pakistan would set aside nuclear weapons for transfer to Saudi Arabia or participate in a nuclear sharing arrangement.”

Saudi allies, particularity the U.S., will not tolerate Saudi going nuclear as their over-zealous media and some in the regime would like to claim.

Washington has talked about offering Riyadh a “nuclear umbrella” that would purportedly protect Gulf states including Saudi Arabia against a nuclear Iran. If it was to go ahead, the deal would in fact limit Saudi nuclear ambitions.

Under the proposal Saudi Arabia would be negotiating a civil nuclear cooperation agreement. It is expected to include language whereby Saudi Arabia voluntarily refrain from enrichment and reprocessing.  Heavy investments in the King Abdullah Center for Atomic and Renewable Energy would be scaled back and plans for city-sized research center would be shelved. The money would be going to US coffers instead.

The nuclear blustering in the Saudi media can also prove hollow on other counts. This month (in October) the IMF said that Riyadh suffers low oil prices and a budget deficit that could erode reserves quickly.

Worse, in their zeal to spread its regional hegemony, the Saudi royal family took on large foreign expenditure as well. It contributed some 6 billion dollars to the military coup in Egypt that toppled the country's first elected president for fear democracy could spread to the conservative kingdom. It later started a costly bombardment campaign on the Shiite Houthi Group in Yemen in March 2015 on top of its bankrolling some Syrian rebel groups fighting for the fourth year.

The Iran deal may have indeed alarmed the Saudi regime into unleashing is propagandists into nuclear grandstanding but the country had missed the opportunity of a real nuclear programme a long time ago. Re-opening that window again can and will take many more years. [IDN-InDepthNews – 25 October 2015]