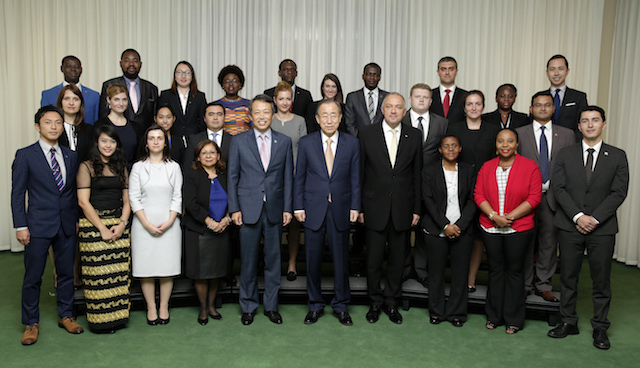 The 193-member General Assembly, through its Committee on Disarmament and International Security (also known as the First Committee), is expected to establish an open-ended working group — or possibly two such groups — to deliberate or negotiate on effective measures for nuclear disarmament.

One of the draft resolutions, currently in circulation, calls for the Working Group to convene in Geneva in 2016, as a subsidiary body of the General Assembly and under its rules of procedure.

The Working Group is expected to submit a report, reflecting the negotiations and its recommendations, to the General Assembly at its 71st session in September next year.

A second draft resolution, sponsored by Iran, calls on a second Working Group to transmit its report to the U.N.’s high level international conference on nuclear disarmament to be held no later than 2018, and to the Conference on Disarmament and the Disarmament Commission.

This development, he said, builds on the momentum created by the 2013 open-ended working group to develop proposals for multilateral negotiations; the 2013 and 2014 conferences on humanitarian impacts of nuclear weapons in Oslo, Nayarit, and Vienna; and the draft final document of the May 2015 NPT Review Conference.

“Regardless of the short-term output of a new working group, its operation would definitely be positive because it would keep the momentum going and create an opening for further steps.”

The United States, he pointed out, has shifted its position from its opposition to the 2013 working group, saying that it would support a new working group, though it insists on a consensus procedure and says that a working group should explore all effective measures (e.g. verification) for nuclear disarmament, not negotiate legal measures.

Which other members of the Permanent Five — including Britain, France, China and Russia — will come out, remains to be seen, he added.

“But the U.S. shift is a sign that the environment is changing for the better,” said Burroughs, who is also Director of the U.N. Office of International Association of Lawyers Against Nuclear Arms.

Jackie Cabasso, executive director of the Western States Legal Foundation, one of the strongest advocates of nuclear disarmament, told IPS that all resolutions forwarded from the Committee on Disarmament and International Security are overwhelmingly adopted each year by the General Assembly, which is not bound by consensus.

This year, she pointed out, the General Assembly is expected to establish an open ended working group (open to all 193 member states) to take forward proposals to implement nuclear disarmament.

She said a statement made Oct.16 by a coalition of over 135 non-governmental organisations (NGOs) from 19 countries has an unequivocal message: “We call on (member) states to stop fiddling while Rome burns.”

In a statement endorsed by the 135 organizations, Cabasso told the First Committee the nuclear-armed countries are edging ever closer to direct military confrontation in conflict zones around the world, from Ukraine to Syria and the broader Middle East to the Western Pacific.

“The danger of nuclear war is growing again on a scale measured in months or years,” she said.

And those who rule in the nuclear-armed states appear comfortable approaching disarmament on a time scale measured in generations — and show no interest in taking up the task again anytime soon.

Aaron Tovish, International Director, 2020 Vision Campaign, and Mayors for Peace, told IPS: “Given the ongoing abuse of the consensus rule in the Conference on Disarmament, already back in 2006, Mayors for Peace began promoting the creation of a working group that would operate under U.N. General Assembly rules of Procedure.”

He said the 2013 Open-Ended Working Group on ‘Taking Forward Multilateral Negotiations on Nuclear Disarmament’ was a successful, albeit too short, exercise.

“It is most timely to revive the Working Group with a stronger mandate.”

“I see nothing wrong with having working groups being held in both Geneva and New York next year. Each venue has strengths and weaknesses, so those prepared to work for nuclear disarmament in good faith, should be willing to contribute to both venues” he added.

Tovish also said: “We are just at the beginning of getting full-fledged negotiations (on establishing a Nuclear Weapons-Free World) underway, so it is too early to be prejudging which way forward will be most productive. It is conceivable that a good division of labour could be agreed upon for two (or more) forums.”

In her statement, prepared by Andrew Lichterman on behalf of the coalition, Cabasso said: “No amount of tinkering with the disarmament machinery can turn it into a vehicle for disarmament progress when those in the driver’s seat have no intention of moving forward.”

She said the new round of conflicts and confrontations, and the resumption of arms racing, are driven by those who have the power to shape policy in the nuclear-armed states.

“Primary responsibility for the continued scourge of industrialized warfare world-wide lies with the military-industrial complexes and national security state elites at the apex of the global war system, and those in the United States above all.”

Cabasso said nuclear-armed states account for three quarters of global arms exports; the United States and Russia together for over half.

She said these human catastrophes are used to justify competing armed interventions that raise the stakes even higher, with nuclear-armed militaries operating in close quarters in proxy confrontations that easily could spiral out of control.

A small fraction of humanity benefits in the short run from these high stakes competitions; all of us bear the risk, she declared. (IPS | 28 October 2015)