Pugwash Conference Warns of the Growing Menace of Nuclear Weapons 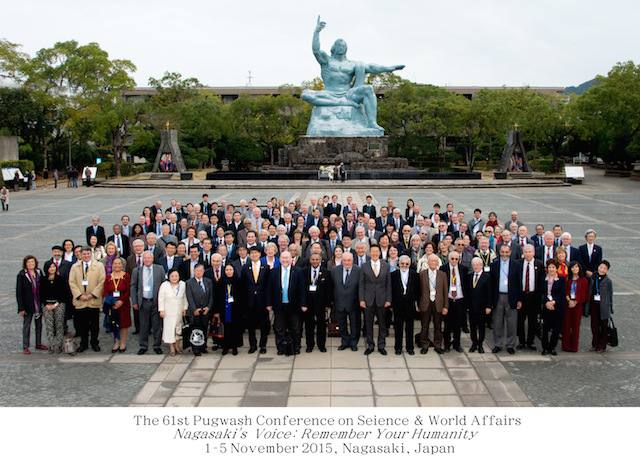 TOKYO (INPS | IDN) - The Pugwash Conference, which was awarded the Nobel Peace Prize in 1995, has urged all nuclear weapon states to abandon nuclear-weapon system modernization programmes, and spend the billions of dollars earmarked for those programs on minimizing nuclear risks, preventing accidental launches and cyber attacks, and promoting disarmament.

Scientists and nuclear experts from around the world concluded their five-day meeting in Nagasaki, which along with Hiroshima suffered atomic bombings 70 years ago, issued a the 2015 Nagasaki Declaration on November 5 pleading with the nuclear weapons states to “commit themselves not only to reduce but also to eliminate nuclear weapons”.

They also stressed the need for speedy Entry-Into-Force of the Comprehensive Nuclear-Test Ban Treaty. “Non-nuclear-weapon states that depend on extended nuclear deterrence also must support nuclear disarmament and change their security policies, for example by joining or establishing Nuclear-Weapon-Free Zones,” the 2015 Nagasaki Declaration said.

Following is the complete text of the Declaration:

'Let Nagasaki be the last.” Seventy years after the destruction of Hiroshima and Nagasaki, we are still faced with the imminent dangers posed by thousands of nuclear warheads. Atomic bomb survivors (Hibakusha) are on average above 80 years old. To this day they suffer from the effects of the nuclear attacks that devastated their lives. The Pugwash Council hears the voices of the Hibakusha calling for the abolition of nuclear weapons. We urge world leaders to heed their call now.

All states with nuclear weapons must abandon nuclear-weapon system modernization programs. They should spend the billions of dollars earmarked for those programs on minimizing nuclear risks, preventing accidental launches and cyber attacks, and promoting disarmament. Most importantly, they must commit themselves not only to reduce but also to eliminate nuclear weapons. The speedy Entry-Into-Force of the Comprehensive Nuclear-Test Ban Treaty is essential. Non-nuclear-weapon states that depend on extended nuclear deterrence also must support nuclear disarmament and change their security policies, for example by joining or establishing Nuclear-Weapon-Free Zones.

Current international disarmament and non-proliferation fora, such as the nuclear Non-Proliferation Treaty (NPT) review process as well as the Conference on Disarmament (CD), are important but also have shown limitations. Global initiatives aimed at legally banning nuclear weapons through coalition among states, civil society, and international organizations can play a significant role in eliminating nuclear threats.

The 2011 Fukushima nuclear disaster reminded us of the importance of nuclear safety and the containment of nuclear technology risks. Modern technology is progressing rapidly in many fields. Without sufficient attention paid to its ultimate effects on humanity, further dangers may arise. The social responsibility of scientists is perhaps today more critically important than ever.

“Dialogue across divides” is the spirit of the Pugwash movement. Regional tensions that might trigger nuclear conflicts should be addressed through diplomatic measures. All parties must avoid military conflicts at all costs. Unless war is eventually eliminated, the survival of human beings will continue to be threatened by present and new generations of weapons of mass destruction. We reiterate the essence of the Russell-Einstein Manifesto, we must abolish nuclear weapons and ultimately eliminate war itself from our planet.

Human beings cannot survive without a strong sense of morality and ethics. It is crucially important that the experiences of the Hibakusha from Hiroshima, Nagasaki, and nuclear test sites around the world should be transferred to the next generation. As long as nuclear weapons and other weapons of mass destruction exist, their catastrophic consequences cannot be avoided. Recalling the Russell-Einstein Manifesto, sharing the voices of Nagasaki citizens and Hibakusha, standing in the middle of this city with its deep-rooted memory of devastation under the mushroom cloud, the Pugwash Council appeals again as human beings to human beings, “Remember your humanity, and forget the rest.”

*nternational Press Syndicate monitors diverse news and information sources around the world, enabling IDN - its flagship - offer news, features and analyses on topics that impact the world and its peoples. [IDN-InDepthNews – 05 November 2015]

Related IDN article: Symbols of Peace for Survivors of Hiroshima and Nagasaki Bombings