Need for Dialogue among Divides: A Pugwash Perspective 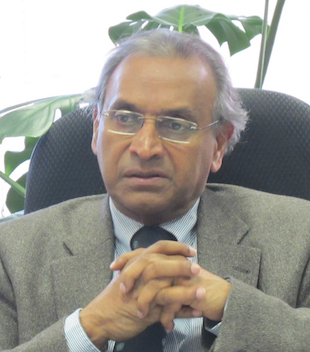 NAGASAKI (IDN) - The recent Nagasaki Pugwash Conference coincided with many significant anniversaries in the history of global peace and security – on this occasion with strong links to the host country, Japan.

- It was the 70th anniversary of the United Nations Organization, which underpins the prevailing global system of peace and security with its Charter and the framework of norms and values it upholds;

- It was the 60th anniversary of the Pugwash bedrock document and surely one of the earliest formulations of the “Humanitarian Pledge” of today – the 1955 London Manifesto of the Pugwash founding fathers Albert Einstein and Bertrand Russell – one of whose co-signatories was Professor Hideki Yukawa, the Nobel Physics Laureate from Kyoto University, Japan;

- And it was the 20th anniversary of the award of the Nobel Peace Prize jointly to Pugwash and to one of its founders Sir Joseph Rotblat three months after the Pugwash Conference was held in Hiroshima in that year.

Anniversaries are not merely sentimental occasions. They are valuable opportunities for stocktaking – surveying the road traversed and preparing for the journey ahead.

On a more sombre note, it was the 70th anniversary year of the dropping of the plutonium bomb “Fat Man” by the USA on the city of Nagasaki on August 9, 1945 killing 35,000–40,000 people outright with an eventual total of 60,000–80,000 fatalities, colossal property damage and environmental pollution. While paying homage to the memory of those who were killed, the survivors of both Nagasaki and Hiroshima – the “hibakusha” – must be recognized for their tireless efforts to ensure that never again will the world witness the use of a nuclear bomb.

On the morning the Conference opened, officials of the Pugwash Conferences on Science and World Affairs presented gold-plated official copies of the Pugwash Nobel Peace Prize medal for display in the atomic bomb museums in Nagasaki and Hiroshima together with copies of the Nobel diploma reaffirming a continuing commitment to work actively for a world free of nuclear weapons.

Together with the Bomb dropped on Hiroshima earlier, on August 6, we have grim reminders of the raison d’être of Pugwash and its origins in the Cold War years when the horror of a nuclear holocaust hung over our heads. That spectre, with almost 16,000 nuclear warheads being held today among nine nuclear weapon armed countries, remains perhaps even more ominous and immediate than ever before. Conflicts rage in various parts of the world with new anarchic non-state actors – some of them with medieval mindsets – seeking to acquire this most destructive and inhumane weapon ever invented.

Nuclear disarmament, therefore, remains a central task. The gulf between the two major nuclear weapon armed nations – the USA and Russian Federation who possess 93% of all the nuclear weapons in the world – has frozen progress in bilateral arms control and disarmament imperiling even the agreements reached in the past such as the Intermediate-Range Nuclear Forces Treaty (INF) of 1987.

The goal of a nuclear weapon free world in President Obama’s Prague Speech of 2009 has now, alas, become a mirage. Only international civil society maintains pressure for a Nuclear Weapons Convention supported by the UN Secretary-General and His Holiness the Pope.

The global situation and the Thucydides Trap

In his most recent book, World Order, published at the end of 2014, Dr. Henry Kissinger provided a historical analysis of a quest for a rule based global order. That quest has to be undertaken today in a world where in Kissinger’s words: “Chaos threatens side by side with unprecedented interdependence; in the spread of weapons of mass destruction, the disintegration of states, the impact of environmental depredations, the persistence of genocidal practices and the spread of new technologies threatening to drive conflict beyond human control or comprehension.”

Thus in today’s world a rule based world order seems even more remote considering the diversity of emerging players and problems with no apparent centre of gravity. Even as the slowing down of the Chinese economy has its ripple effects globally proving how interconnected we all are, fatalistic predictions are made by commentators on the “Thucydides Trap” – referring to The History of the Peloponnesian War on the inevitability of war between the then established power Sparta and the aspiring power Athens – as if we are destined to repeat the mistakes of history.

The recent visit of President Xi Jinpin to the UK and the entry of Russia in the battle against ISIS in Syria are two examples of the co-operation that is possible among the Great Powers in the interest of world peace and stability. Pugwashites, recalling the Russell-Einstein Manifesto, can never accept the inevitability of war.

In the face of the stark realities of the contemporary world situation a Pugwash perspective on world affairs, stressing Dialogue among Divides, and the common bond of humanity that binds us all, must be pursued vigorously in traditional areas of activity and in the new areas that today’s political, economic and technological developments have created – climate change, cyber security, terrorism, inequalities, the refugee crisis and other challenges.

If Pugwash functions as a confederation of autonomous national groups interacting with each other at the regional level and with Pugwash International at the global level on specific initiatives its collective impact can be enhanced.

Quiet Diplomacy: Afghanistan, Cuba and Beyond

Despite enormous odds Pugwash has persisted with quiet diplomacy very rarely publicized. In May this year the international media reported that Afghan government officials and Taliban militants began two days of meetings in Qatar.

This was the subject of a New York Times Editorial on May 6, which expressed satisfaction over the modest results of a meeting brokered by Pugwash. The Editorial concluded: “The tone of the meeting offered a sense of promise ….The killing by the Taliban and the government hasn’t stopped. But informal talks can, over time, pave the way to formal negotiations and possibly peace.”

Pugwash USA also played an unpublicized but significant role in the normalization of U.S.-Cuba relations by helping to organize a U.S.-Cuba Hemingway Commemorative trip to Cuba that involved John and Patrick Hemingway, grandsons of Ernest Hemingway, and several prominent U.S. marine biologists and environmental scientists.

Iran and ‘Five plus One’

One area where Pugwash’s long-standing efforts finally bore fruit is with the conclusion of the Joint Comprehensive Plan of Action (JCPOA) between Iran and the “Five plus One” on Iran’s nuclear programme.

Over the years Pugwash had worked patiently and painstakingly for this result through consultations and discreet meetings at times when such meetings were unthinkable and could have caused their participants some discomfiture if disclosed.

All who contributed to the final result deserve congratulations and good faith implementation of the JCPOA in all its aspects is what is needed now. As the Pugwash leadership stated in a Press release issued on July 14 this year:

“The agreement strengthens the Non Proliferation Treaty, and contributes in important ways to security and stability in the Middle East region.

It shows that there is no alternative to negotiations based on mutual respect, reciprocity and recognition of each other’s security concerns and legal rights. Attempting to “solve” the Iranian nuclear problem by military means would have had gravely negative consequences for the already troubled Middle East and for the nuclear non-proliferation regime.

What is important now is:

a) to ensure constructive, businesslike and comprehensive implementation of the new agreement by all parties, while resisting attempts to derail it

b) to take advantage of this diplomatic success to improve as much as possible political, diplomatic, and economic relations with Iran, and to contribute to building trust and improving relations among all States in the Middle Eastern region.”

A direct sequel to JCPOA should be the dismantling of the NATO BMD (Ballistic Missile Defence) system in Europe, which used, as its rationale, the threat from Iran thereby provoking the Russian Federation. We expect also to see Iran playing a constructive role in Middle East conflicts in the future and its invitation to Vienna for talks on Syria must be welcomed.

While this aspect of non-proliferation was a success, 45 years after the entry into force of Treaty for the Non-proliferation of Nuclear Weapons (NPT) and 20 years after the Treaty was extended under my Presidency by the adoption, without a vote, of a package of Three Decision and a Resolution on the Middle East, the 2015 NPT Review Conference failed to adopt a consensus final document.

Apart from persistent differences between the nuclear weapons states and non-nuclear weapon states, the failure to have any progress on achieving a Middle East Weapons of Mass Destruction Free Zone (MEWMDFZ) and the refusal to acknowledge the burgeoning “Humanitarian Initiative” were the main reasons. Inevitably questions are raised on whether the NPT can survive with such failures on fundamental issues.

With all nuclear weapon states modernizing their nuclear weapons the prospects for nuclear disarmament are bleak and non-nuclear weapon states that depend on nuclear deterrence are equally culpable. There are rumours of a U.S.-Pakistan civilian nuclear co-operation deal to parallel the U.S.-India civilian nuclear co-operation agreement. Reports also claim that new U.S. nuclear weapons are to be based in Germany. Meanwhile eight states have still to ratify the CTBT (Comprehensive Nuclear-Test-Ban Treaty) for it to enter into force and convert the fragile de facto moratorium on testing into a permanent legal norm.

Global peace and security rests on a tripod of military security commensurate with the self-defence needs of nations as permitted by Article 51 of the UN Charter; sustainable development; and human rights.

The sad media images of thousand of displaced by conflicts streaming across Europe after braving hazardous sea voyages vividly proved that we have had the largest numbers of displaced following conflict since World War II. And yet on their arrival they are met with discrimination in the countries of temporary refuge they seek. The generosity of German Chancellor Angela Merkel stands out as a shining example of leadership, compassion and our common humanity.

The failure of the major powers and regional powers to agree on a settlement of the crises in Syria, Yemen and other countries in the Middle East and stop the flow of arms that is fuelling them is unconscionable.

Greed for power and profits for the arms industry are the obvious drivers of conflict with global military expenditure estimated at $1.8 trillion in 2014 – a sad contrast to the one billion of our fellow human beings living on under $1.25 per day the acknowledged benchmark for absolute poverty.

Annual expenditure on nuclear weapons alone is estimated at $105 billion or $12 million per hour. This is scarcely what Article 26 of the UN Charter held up as an ideal “to promote the establishment and maintenance of international peace and security with the least diversion for armaments of the world's human and economic resources”.

The international community has a historic opportunity to finalize a meaningful, universal climate agreement in Paris in December 2015. In so doing, we will build a safer, healthier, more equitable world for present and future generations.

Issuing its “Nagasaki Declaration” at the Conference the Pugwash Council said: “Human beings cannot survive without a strong sense of morality and ethics. It is crucially important that the experiences of the Hibakusha from Hiroshima, Nagasaki, and nuclear test sites around the world should be transferred to the next generation. As long as nuclear weapons and other weapons of mass destruction exist, their catastrophic consequences cannot be avoided. Recalling the Russell-Einstein Manifesto, sharing the voices of Nagasaki citizens and Hibakusha, standing in the middle of this city with its deep-rooted memory of devastation under the mushroom cloud, the Pugwash Council appeals again as human beings to human beings, “Remember your humanity, and forget the rest.”

*Jayantha Dhanapala, a former UN Under-Secretary-General and former Sri Lankan Ambassador, is the 11th President of the Nobel Peace Prize winning Pugwash Conferences on Science & World Affairs. This article is adapted from his Presidential Address at the Nagasaki Conference. [IDN-InDepthNews – 07 November 2015]