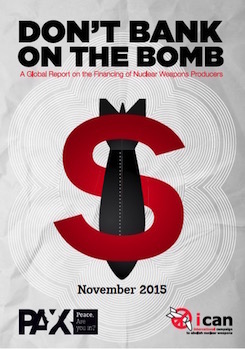 This article was originally published as Foreword to ‘Don’t Bank on the Bomb – A Global Report on the Financing of Nuclear Weapons Producers’, a joint publication of PAX and ICAN.

KANDY, Sri Lanka (IDN) - In a world of unconscionably high military expenditures which feed the conflicts that cause death, destruction and displacement of millions, we need to be constantly reminded of the wise words of President Dwight Eisenhower – a military man, who distinguished himself in World War II and then went on to be the U.S. President for two terms. Addressing his nation in a farewell address on January 17, 1961 Eisenhower - who I was privileged to meet as a student visitor to the US in 1957 – said:

”This conjunction of an immense military establishment and a large arms industry is new in the American experience. The total influence – economic, political, even spiritual – is felt in every city, every Statehouse, every office of the Federal government. We recognize the imperative need for this development. Yet we must not fail to comprehend its grave implications. Our toil, resources and livelihood are all involved; so is the very structure of our society.

In the councils of government, we must guard against the acquisition of unwarranted influence, whether sought or unsought, by the military industrial complex. The potential for the disastrous rise of misplaced power exists and will persist.

We must never let the weight of this combination endanger our liberties or democratic processes. We should take nothing for granted. Only an alert and knowledgeable citizenry can compel the proper meshing of the huge industrial and military machinery of defence with our peaceful methods and goals, so that security and liberty may prosper together.”

Eisenhower’s words have a direct relevance not only for the USA, which accounts for over 40% of global military expenditure, but also for all countries with similar military industrial complexes. The globally respected Stockholm International Peace Research Institute (SIPRI) estimates that global military expenditure in 2014 was 1.8 trillion USD. This must be viewed in juxtaposition with the misery of over one billion of our fellow human beings living below the poverty line of 1.25 USD per day.

While the 70-year old UN Charter does provide for self-defence by nation states there is an unambiguous call on the international community to resolve differences through peaceful means and renounce the use of force in international relations (Article 2:4).

The right to self-defence must also be viewed in an ethical perspective and consequently we have the time-honoured distinction between conventional weapons and weapons of mass destruction. In the latter category we place nuclear, biological and chemical weapons.

We also have inhumane weapons such as laser weapons, binary weapons, anti-personnel land mines, and cluster munitions banned because of their clear violation of universally held humanitarian values. In the same way lethal autonomous weapons (LAWS) or robotic weapons must be prevented and their development proscribed. This moral perspective is shared by all the religions of the world.

Of those weapons of mass destruction that humankind has been confronted with, we have succeeded in outlawing biological and chemical weapons. We have still to ban nuclear weapons although we know that it is the most destructive weapon invented so far, with catastrophic consequences in terms of the scale of deaths and long-term consequences affecting human genetics and the ecology.

Some advances have been made: The numbers of nuclear warheads have been reduced to the current level of 15850 held by nine states; The Nuclear Non-proliferation Treaty has limited the number of states possessing nuclear weapons; The moratorium on nuclear weapon testing pending the entry-into-force of the Comprehensive Nuclear Test Ban Treaty (CTBT) will prevent further nuclear weapon explosions in peacetime; and by having specific geographic areas of the globe and the universe declared nuclear weapon free zones, the chances of the use of nuclear weapons has significantly been reduced.

Nevertheless, nuclear arsenals continue to be modernized and the threat of the use of nuclear weapons by intent or accident and by nation states or by non-state actors is frighteningly real. We must therefore focus on the abolition of nuclear weapons as a priority. It was in September this year that UN Secretary- General Ban Ki-moon said:

“The year 2015 marks the 70th anniversary of the first and last use of a nuclear weapon in war. The norm against the use of nuclear weapons – the most destructive weapons ever created, with potentially unparalleled human costs – has stood strong for seven decades. But the only absolute guarantee that they are never used again is through their total elimination.”

This goal of elimination was a priority established as far back as the very first UN Resolution in January 1946. The UN’s first Special Session devoted to Disarmament (SSOD I) in 1978, the Canberra Commission on the Elimination of Nuclear Weapons in 1996, the ICJ Advisory Opinion of 1996, the Weapons of Mass Destruction Commission of 2004, and several other multilateral statements have concluded that nuclear weapons must be abolished and this has been validated by the evidence we have had on the climatic consequences of even a limited use of nuclear weapons.

I therefore have pleasure in endorsing the International Campaign for the Abolition of Nuclear Weapons (ICAN) for their admirable work. ICAN has stated:

“The production, maintenance and modernization of nuclear forces diverts vast public resources away from health care, education, climate change mitigation, disaster relief, development assistance and other vital services. Globally, annual expenditure on nuclear weapons is estimated at USD 105 billion – or USD 12 million an hour. The World Bank forecast in 2002 that an annual investment of just USD 40–60 billion, or roughly half the amount currently spent on nuclear weapons, would be enough to meet the internationally agreed Millennium Development Goals on poverty alleviation by the target date of 2015.”

Unlike other dangerous industries inimical to human welfare – like the tobacco industry – with a nuclear weapon it is not possible to look at reform or regulations to mitigate its worst impact on human life. Abolition as a policy is firmly resisted by the powerful nuclear weapon states and so we must learn the lessons of previous campaigns to advance the work of civil society.

The outstanding example is the Anti-apartheid Movement’s Divestment Campaign, which struck the first blow in the collapse of that odious system of discrimination in South Africa. We can do the same with regard to the nuclear weapon industry globally. There are companies driving the industry and if the investment funds for them are cut off we will have struck a blow for a nuclear weapon free world, converting a slogan into a practical reality. The early success achieved since the first “Don’t Bank on the Bomb” report is proof that we CAN succeed.