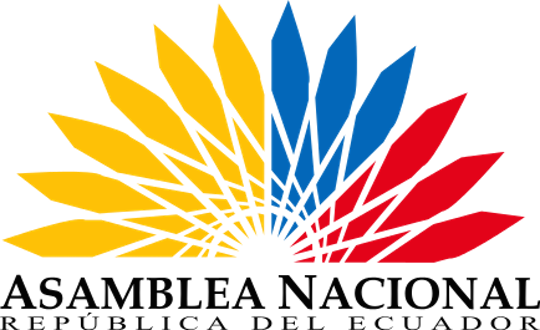 QUITO - The National Assembly of the Republic of Ecuador approved on December 15, 2015 by a vote of 82 in favor, 1 against and 23 abstentions, a resolution that clearly underlines the urgency of driving forward an international treaty to ban nuclear weapons.

The Resolution, presented by the Assembly Member, Maria Augusta Calle, was prepared in collaboration with the International Campaign to Abolish Nuclear Weapons, World without Wars and Violence, and Pressenza the International News Agency for peace and nonviolence.

Prior to the vote, Assembly Member Calle asked the Assembly to receive Tony Robinson, Pressenza co-director, who presented the reason why it is urgent and necessary to advance in the direction of a ban treaty.  Subsequently, after the intervention by the Resolution sponsor, six further speeches were made suggesting modifications to the text.  All but one of which were accepted and incorporated into the final text, the translation of which we publish below.

That, the Constitution of the Republic sets out in art. 5 that: “Ecuador is a territory of peace. The establishment of foreign military bases or foreign facilities for military purposes shall not be allowed. It is forbidden to transfer national military bases to foreign armed or security forces”;

That, the Constitution of the Republic sets out in art. 416 that: “Ecuador’s relations with the international community shall respond to the interests of the Ecuadorian people, to which those persons in charge of these relations and their executors shall be held accountable, and as a result: (..) It promotes peace and universal disarmament; it condemns the development and use of weapons of mass destruction and the imposition of bases or facilities for military purposes by certain States on the territory of others”;

That, this year was commemorated the seventieth Anniversary of the atomic bombings of Hiroshima and Nagasaki, which left hundreds of thousands dead and condemned countless more to lives of suffering and social stigma given that the effects of an atomic bomb are not limited to either time or space and that many of their repercussions continue in the genetic damage produced in future generations;

That, the survivors, the “Hibakusha”, many of whom have dedicated their lives to informing the world about their experiences in order to ensure that future generations would not have to face the same horrors, are increasingly few in numbers and are taking with them the first hand memories;

That, three conferences on the humanitarian impact of nuclear weapons, hosted by Norway, Mexico and Austria in 2013 and 2014 have contributed substantially to our collective understanding of the scope of the destruction caused by nuclear weapons detonations, and have demonstrated that the risks inherent in the very existence of nuclear weapons are significantly greater than previously assumed and are increasing with ongoing modernization programs, new proliferation risks and new technological vulnerabilities, such as those posed by cyber-attacks;

That, it has been ascertained beyond doubt that no state, group of states or international organization has the capacity to adequately address and provide humanitarian relief on a meaningful scale in response to a nuclear weapons detonation.

That, it has been established in the previously mentioned conferences that, in the latest scientific models that attempt to predict the effects of nuclear weapons on the atmosphere, the detonation of one hundred nuclear warheads on cities would create the conditions for a nuclear winter that would end the lives of up to two billion human beings, and that the most affected would be those who live in already precarious situations of nutrition and health, in other words, despite the fact that a nuclear war would take place in the northern hemisphere, the part of the world to suffer most would be those countries in the southern hemisphere;

That, the Nuclear Non-Proliferation Treaty (NPT) in art. VI sets out that, “Each of the Parties to the Treaty undertakes to pursue negotiations in good faith on effective measures relating to cessation of the nuclear arms race at an early date and to nuclear disarmament, and on a Treaty on general and complete disarmament under strict and effective international control”;

That, given the importance of the full implementation of the three pillars of the NPT, nuclear disarmament, non-proliferation and the use of nuclear technology for peaceful purposes, the inability of the 2015 Review Conference to adopt an outcome document is regrettable, and that the failure of the Review Conference should serve as further impetus for efforts to initiate multilateral negotiations for the prohibition and elimination of nuclear weapons, as mandated by Article VI of the treaty;

That, regardless of a country’s status as possessor of nuclear weapons or not, all States have the right to engage in efforts to stigmatize, prohibit and lead to the elimination of nuclear weapons, and therefore efforts led by non-Nuclear Weapon States in bringing forward nuclear disarmament, on the basis of their humanitarian impacts, are both valid and useful, and that those efforts should neither be blocked by nor beholden to the approval of any State, including the Nuclear Weapon States;

In exercising its constitutional and legal rights

Art. 2. – To recall that all Parties to the NPT have a moral and legal responsibility to pursue courses of action, which protect their people from the dangers of nuclear weapons through their prohibition and elimination.

Art. 3. – To welcome the approval in the First Committee of the United Nations General Assembly, in its seventieth session this year, of a resolution that “calls upon all States to identify and pursue effective measures to fill the legal gap for the prohibition and elimination of nuclear weapons and to cooperate with all stakeholders to achieve this goal,” and a resolution that established “an open-ended working group to negotiate with a view to reaching agreement on concrete and effective legal measures to achieve nuclear disarmament, in particular new legal provisions and norms to attain and maintain a world without nuclear weapons.”

Art. 4. – to call for restraint so that those who are authorised to keep nuclear weapons neither increase their strength nor use them, likewise to call on states parties to the NPT to not use them and on non-states parties to the treaty to join it and become subject to it.

Art. 5. – To call on the government of Ecuador to take all possible measures so that the open-ended working group may reach conclusions that lead to the start of negotiations for a treaty to ban and eliminate nuclear weapons.

Art. 6. – To congratulate the governments of the CELAC region for their strong commitment to nuclear disarmament, above all in the declaration from earlier this year in the city of Belén, Costa Rica, thereby putting the region in the vanguard of global efforts to achieve a treaty to ban nuclear weapons.

Art. 7. - To call on the CELAC region, in its forthcoming summit in Ecuador at the end of January, to go beyond the steps already taken towards the creation of a treaty to ban and eliminate nuclear weapons, and offer a convenient place in the region to host future negotiations for such a treaty.

Art. 8. – To denounce the fact that despite the NPT entering into force in 1970 the world is no nearer the objective of nuclear disarmament.

Art. 9. – To disseminate this Resolution through the media to the Ecuadorean people so that they may know the risks the country and the world face in the case of a nuclear war in any point of the planet.

Art. 10. – To transmit this Resolution to the Ministry of International Relations and Human Mobility.

Given and subscribed in the headquarters of the National Assembly, located in the Metropolitan District of Quito, in the province of Pichincha, on the 15th of December, in the year two thousand and fifteen.

* Nelsy Lizarazo is a correspondent of Pressenza, the International News Agency for peace and nonviolence. This article first appeared on Presenza. It is also available in: Spanish, Italian, Greek (17 December 2015)