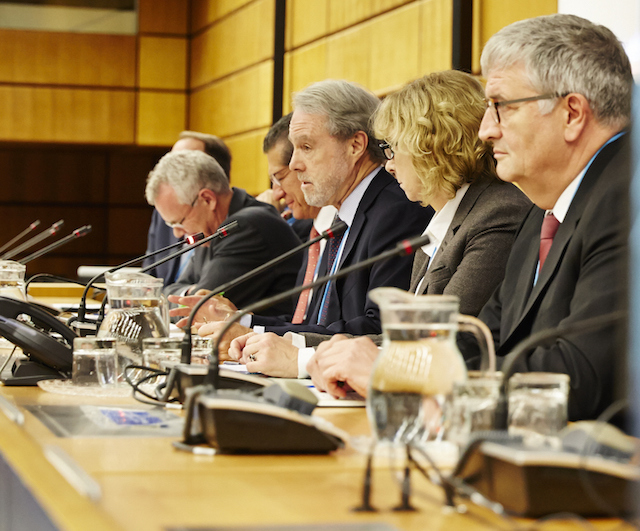 VIENNA (IDN) - Iran and North Korea dominated the landmark symposium ‘Science and Diplomacy for Peace and Security’ organised by the Comprehensive Nuclear-Test-Ban Treaty Organization (CTBTO) end of January in Vienna, the capital of Austria.

As chance would have it, ahead of the event, on January 16, U.S. President Barack Obama revoked a 20-year system of sanctions against Iran and Federica Mogherini, the European Union High Representative for Foreign Affairs, announced the lifting of EU economic blockade against Tehran.

A day later, the UN Security Council announced that it had removed Iranian Bank Sepah and its international subsidiary from a sanctions list. The initiative followed the announcement the previous day of a UN report confirming that Iran had completed necessary preparatory steps to start the implementation of the Joint Comprehensive Plan of Action (JCPOA) aiming to resolve the nuclear issue.

Ten days earlier, on January 6, North Korea defied world powers by announcing that it had successfully tested a miniaturized hydrogen nuclear device – in contravention of the international norm against nuclear testing.

North Korea has been under UN Security Council (UNSC) sanctions since it first tested an atomic device in 2006. As in the past, the UNSC unanimously condemned this “reprehensible act, which destabilizes regional security”.

North Korea said that it would not give up its nuclear programme as long as the United States maintained what it called "its stance of aggression”. It vowed not to use its nuclear weapons unless its sovereignty was infringed.

The reason why Iran drew the focus of the CTBTO symposium is that along with China, Egypt, Israel and the United States of America, it has signed the Comprehensive Nuclear-Test-Ban Treaty (CTBT) but like the other three states has not yet ratified. North Korea was on the radar because like India and Pakistan it has not signed the Treaty.

Altogether 183 member states of the United Nations have signed the CTBT and 164 have ratified. But it will enter into force only when 44 countries complete their ratification procedures. Of these, eight (mentioned above) are still missing.

The Treaty was opened for signature in 1996. Twenty years hence, the CTBT is in limbo. “Until such time as it enters into force, the CTBT is unfinished business. Unless we finish what we started, there is a risk that we will lose twenty years of hard work and fifty to sixty years of negotiations on a world without nuclear testing,” the CTBTO Executive Secretary Lassina Zerbo said in his opening remarks to the symposium on January 25.

Over 400 representatives from educational institutions, non-governmental organizations, National Data Centres, and government ministries from all regions attended the symposium. Some of the lead negotiators of the CTBT in the Conference on Disarmament (CD) in the mid-1990s brought into focus what a monumental accomplishment it was to have the CTBT opened for signature.

Achieving entry into force of the Treaty was the subject of a moderated debate among members of the Group of Eminent Persons (GEM) and other experts who negotiated the Treaty or have been blocking its way to becoming a legally binding law.

The crucial question was: How to set the ball rolling? While one school of thought was of the view that once Washington ratifies the Treaty it has signed, other holdouts would follow suit. But others argued that either Iran or Israel could take the lead.

Israel’s i24news quoted the Israeli representative to the International Atomic Energy Agency (IAEA), Ambassador Merav Zafary-Odiz, saying, “A regional moratorium could enhance security, and potentially lead to a future ratification of the CTBT. Israel has announced its commitment to a moratorium, it would be useful for others to do the same.”

A region wide test ban, Zafary-Odiz said, would enhance security throughout the Middle East, and could also contribute to the efforts to establish a WMD-free zone in the Mideast (Weapons of Mass Destruction).

Zafary-Odiz criticized the fact that the CTBT ratification was not included in the nuclear deal signed in July 2015 between Iran and world powers. “The ratification by Iran was natural … to prove Iran’s intentions for the future.”

The CTBTO Executive Secretary Zerbo, on the other hand, rejected the prevailing assumption that “we must wait for one country to set the dominos tumbling”. He said: “I don’t believe that there is one 800lb gorilla and seven 250lb gorillas. No country needs to wait. As far as CTBT entry into force is concerned, all the remaining countries are the same.”

In fact, the Iran deal shows that multilateral collaboration can effectively overcome difficult problems. Many of the key players in the Iran deal – such as EU High Representative Mogherini – are now talking about CTBT entry into force as the next big goal in disarmament and non-proliferation, which can be achieved with a similar approach. “Let’s make her words a reality,” Zerbo said.

He added: “One opportunity is to explore a Nuclear Test Free Zone in the Middle East. By signing the Treaty, Egypt, Iran and Israel have already said no to testing. Let’s turn that no into a never.”

According to the CTBTO Chief, despite its fourth announced nuclear test, engagement with North Korea should not be seen as out of reach. “New channels that may foster incremental change in the DPRK (North Korea) can be explored. I believe that the CTBT can be a part of such engagement. I have consistently said that I do not believe in isolation but rather in dialogue.”

Former UN Under-Secretary-General for Economic and Social Affairs, Zukang Sha from China, supported the view, arguing that “as a sovereign country North Korea deserves respect”. His personal view, he emphasized, was that sanctions were not the way to encourage North Korea to abide by the CTBT and stop all nuclear tests.

Zerbo warned that fatigue with existing structures in non-proliferation and disarmament is a real danger to making progress. “I understand the disappointment that many feel with the NPT (Nuclear Non-Proliferation Treaty) Review Process. And it is fascinating to see new approaches emerge, such an analysis based on humanitarian concerns.”

Some have now suggested a nuclear weapon convention. “But we should bear in mind that we do not yet have even a nuclear-test free world. It is hard to imagine progress until that is achieved,” the CTBTO head added.

He said: “Acting on the CTBT can be ‘disruptive’ in only the positive sense of the word. It would transform bilateral and multilateral relationships, build confidence regionally and globally, and help unlock a range of pending issues in non-proliferation and disarmament.”

Michael Krepon, Co-Founder of the Washington-based Stimson Center said the UN General Assembly (UNGA) and the Security Council could play an important role by passing resolutions that lend impetus to entry into force of the CTBT.

Note: This is the second in a series of four articles flagged ‘CTBTO: Acronym of the Year’. The first titled ‘Banning The Bomb With Science And Diplomacy’ was published on January 20. [IDN-InDepthNews – 31 January 2016]