Obama Joins Japan and Kazakhstan to Campaign for CTBT 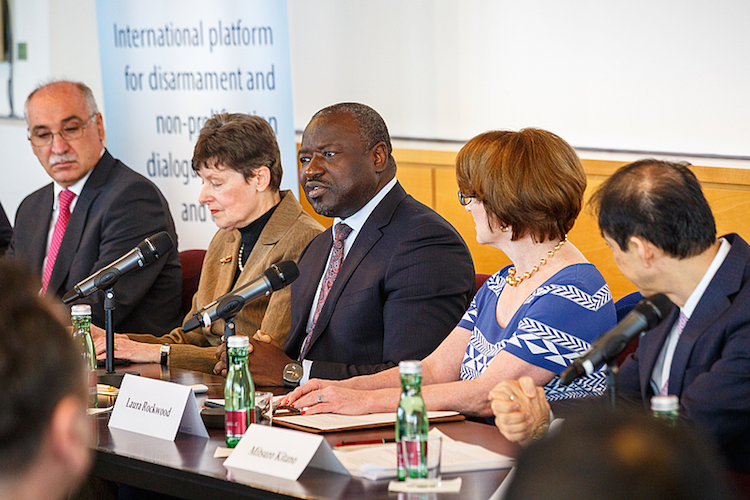 BERLIN | VIENNA (IDN) - “The security of the world demands that nations — including the United States – ratify the Comprehensive Test Ban Treaty and conclude a new treaty to end the production of fissile material for nuclear weapons once and for all,” wrote U.S. President Barack Obama in his opinion article for the Washington Post on March 30 on the eve of the fourth Nuclear Security Summit in Washington.

Obama’s clarion call for ratification of the CTBT, banning all nuclear tests everywhere and anywhere – in run-up to the end of his presidency nine months from now – is of crucial importance.

Twenty years after the treaty opened for signature, 44 specific nuclear technology holder countries must sign and ratify before the CTBT can enter into force. Of these, eight are still missing: China, Egypt, India, Iran, Israel, North Korea, Pakistan and the USA. India, North Korea and Pakistan have yet to sign the CTBT.

In an address the Vienna Center for Disarmament and Non-Proliferation (VCDNP) at the Permanent Mission of Japan, on March 24, Zerbo, challenged the 44 (Annex 2) States to identify “what needs to be done” to proceed towards ratification. The event was being held in conjunction with the VCDNP’s short intensive course on non-proliferation and disarmament for young diplomats.

The Annex 2 states are those that participated in the negotiation of the CTBT from 1994-1996 and that possessed nuclear power or research reactors at the time.

“The CTBTO has provided the technical tools to enforce the Treaty – come tell us the issues,” implored Zerbo, before appealing to young people to find alternative solutions to the problems raised.

Zerbo was joined by an esteemed panel including the co-chairs of the 2015 Article XIV Conference Mitsuro Kitano, Permanent Representative of Japan to the CTBTO, and Kairat Sarybay, Permanent Representative of Kazakhstan to the CTBTO. Kitano and Sarybay both provided their insights into how the Article XIV Conference, designed to promote the entry into force of the Treaty, contributed to galvanising support for the CTBT.

The panel suggested confidence building measures to overcome existing hurdles to facilitate progress toward the entry into force of the Treaty. In addition, the representatives of Annex 2 States on the panel, Israel and the United States, shared their views on why their respective states had not yet ratified the Treaty.

“CNS and the VCDNP share the mission of “training the next generation” of non-proliferation and disarmament specialists” commented Potter.  “In this regard, there is a close correspondence between our work and the efforts of the CTBTO to engage young people around the world on issues of disarmament and non-proliferation.”

“What is particularly rewarding about working with young people is that they are idealistic, full of energy, and believe that anything and everything is possible; traits that all too often are missing among more experienced diplomats and government officials,” said Potter.

The CTBTO works with civil society and educational institutions to engage and inform the decision makers of tomorrow. In January 2016, during the Symposium on Science and Diplomacy for Peace and Security: the CTBT@20, the CTBTO Youth Group was launched.

According to the CTBTO, the group is open to all students and young graduates who are directing their careers to contribute to global peace and security, and who wish to actively engage in promoting the CTBT and its verification regime.

Zerbo also mobilised support for reenergising the CTBTO @ 20 during his visit to Morocco on March 21 where he met with government officials and spoke with young diplomats at the Moroccan Academy of Diplomatic Studies.

Talking to 35 young diplomats, Zerbo urged them “to look for opportunities that the political process may accord in order to achieve a safer world”. He noted that he regarded the work of the CTBTO as unparalleled in its employment of science in the service of diplomacy.

“By pushing the frontiers of science and technology, I personally, as a scientist, can appreciate the contribution of the CTBTO’s International Monitoring System in making the world a safer place for future generations”, Zerbo added.

The CTBTO Executive Secretary also expressed his belief that the Middle East could find new pathways for renewed dialogue and confidence building through the creation of a nuclear-test free zone based on the ratification by Egypt, Iran, and Israel of the Comprehensive Nuclear-Test-Ban Treaty.

As part of the CTBTO verification regime, Morocco hosts a CTBTO International Monitoring System (IMS) seismic monitoring station located at Midelt. In addition to aiding international peace and security, the civilian and scientific benefits of the IMS are being realised around the world; African scientists are using CTBTO data for studying seismic or volcanic hazards, and even to detect illegal dynamite fishing.

IMS data can be used to analyse climate change and better predict storms. Closer cooperation between the CTBTO and Morocco can build capacity to aid Moroccan scientists in making better use of IMS data. [IDN-InDepthNews – 31 March 2016]

Photo: Lassina Zerbo (centre), Executive Secretary of the CTBTO, with Angela Kane on his right, addresses an event in Vienna. | Credit: CTBTO