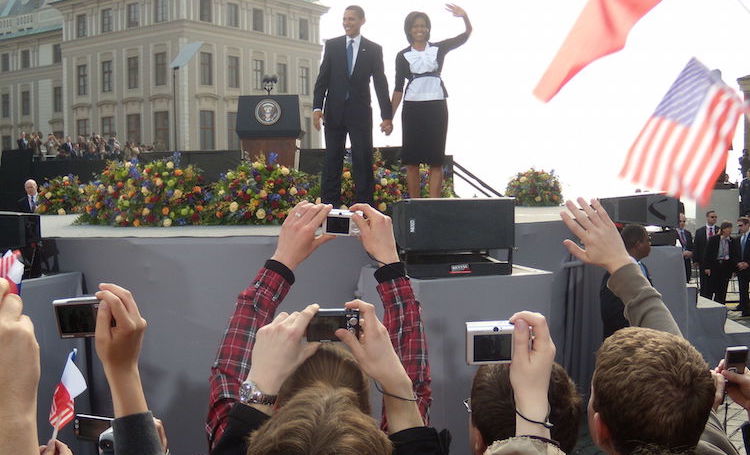 Since then we have had the anti-climax of four Nuclear Security Summits and repeated warnings about nuclear terrorism but no meaningful nuclear disarmament.

Pocketing his prematurely awarded Nobel Peace Prize, the U.S. President has reverted to being the conventional leader of the greatest military-industrial complex in the world spending approximately US $610 billion annually of the global military expenditure of US $ 1.8 trillion and a staggering US $ 355 billion over the next ten years on nuclear weapon modernization.

After a modest new START pact with Russia in 2010 he has continued the policies of nuclear deterrence, aggressive NATO expansion and Ballistic Missile Defence systems emplacement making a rapprochement with Putin’s Russian Federation, after the latter’s annexation of Crimea and hostile policy directed at Ukraine, even more difficult.

Faced with an implacably hostile Republican dominated Congress, Obama belatedly arrived at an agreement with Iran through a Joint Comprehensive Plan of Action largely because of the principled position of the EU and the patience of the Iranian leadership under the liberal President Rouhani.

Other foreign policy “successes” are the yet unimplemented decision to close Guantanamo and the re-establishment of relations with Cuba followed by a visit there. Both these achievements must be recorded as “incompletes” in Obama’s report card since the U.S. Congress opposes the closure of Guantanamo and the cessation of the human rights violations that go on there – violations for which other countries are routinely condemned in the Geneva-based Human Rights Council by the U.S. – while the embargo against Cuba continues even as diplomatic missions are ceremoniously re-opened after decades.

Amidst these non-events in the final year of the Obama Presidency is the fourth and final Nuclear Security Summit held in Washington with a final communiqué coming out on April 1. The conspicuous Russian absence notwithstanding, the active participation of two of the largest countries in the world – China and India – with a collective population of over 30% of the world, both of them nuclear weapon armed, was seen as an accomplishment that salvaged the Summit.

While the flow of refugees from proxy wars and conflict-ridden Middle East countries challenges European unity and its moral value base, extremist ISIS terrorism strikes terror in European cities. Suddenly nuclear terrorism becomes more real than ever despite all that has been done implementing UN Security Council Resolution 1540 and the Obama-sponsored Security Summits of 2010 in Washington, 2012 in Seoul and 2014 in The Hague.

The key fact is that no steps are being taken towards the elimination of nuclear weapons despite the surge of international support for the ‘Humanitarian Pledge” and a Nuclear Weapon Convention.

Joe Cirincionne of the Ploughshares Fund writing to the Huffington Post states: “The president has the right vision, but he has been let down by his own bureaucracy, particularly Pentagon officials who defend obsolete nuclear programs more than the president’s policies. He could use a speech at Hiroshima to recapture his agenda, to force executive actions. He could announce that he is canceling or delaying the most dangerous and destabilizing of the new systems he has ordered built — the new nuclear cruise missile and the new intercontinental ballistic missile, as former Secretary of Defense Bill Perry urged.

“He could take at least a portion of our redundant, obsolete weapons off of hair-trigger alert. He could pull our nuclear weapons left over from Cold War deployments from insecure bases in Turkey and Belgium. He could take any of a dozen other actions experts have recommended. He could leave the presidency knowing that when he had the chance, he did everything he could to protect America from the most horrific weapons humankind ever invented.”

In the face of the above agenda the recently concluded Nuclear Security Summit is in fact a placebo. The final communiqué of the Summit must be deconstructed to identify what was actually achieved:

1. It repeats that the threat of nuclear and radiological terrorism remains one of the greatest challenges to international security and is constantly evolving.

2. It reaffirms that measures to strengthen nuclear security will not hamper the rights of States to develop and use nuclear energy for peaceful purposes but the Iranian example is no encouragement. No prohibition of civilian reprocessing of plutonium is mentioned nor is the need to shift to low-enriched uranium reactors despite repeated advice of expert groups.

3. It reaffirms the fundamental responsibility of States, in accordance with their respective obligations, to maintain at all times effective security of all nuclear and other radioactive material, including nuclear materials used in nuclear weapons, and nuclear facilities under their control. And yet we have a long list of accidents, thefts and cyber attacks.

4. International cooperation, including sharing of information in accordance with States’ national laws and procedures, was pledged towards establishing a more inclusive, coordinated, sustainable, and robust global nuclear security architecture for the common benefit and security of all.

5. The essential responsibility and the central role of the International Atomic Energy Agency in strengthening the global nuclear security architecture and in developing international guidance was supported.

The Communiqué ends stating that “The 2016 Summit marks the end of the Nuclear Security Summit process in this format” leaving it to the incoming U.S. Administration to devise a new format.

But looking at the U.S. Presidential Campaign amidst the denunciation of terrorism there is no indication that any of the contenders in the Presidential race will be ready to reduce and secure nuclear arsenals let alone eliminate them.

Indeed Donald Trump the leading Republican contender would have Japan and the Republic of Korea acquire their own nuclear weapons and never mind the Treaty for the Non-proliferation of Nuclear Weapons (NPT) and its 189 states-parties. And all this amidst a deafening silence of the famous Four Horsemen of the Nuclear Apocalypse – Shultz, Kissinger, Nunn and Perry who first led the charge for nuclear disarmament with their famous 2008 Wall Street Journal op-ed well before Obama’s conversion on the road to the White House and to Prague.

Thus we return to the caveat Obama entered in his Prague speech as his escape valve: “This goal will not be reached quickly – perhaps not in my lifetime. It will take patience and persistence. But now we, too, must ignore the voices who tell us that the world cannot change. We have to insist, "Yes, we can.”

Can we really eliminate nuclear terrorism without eliminating nuclear weapons? No we cannot.

*Jayantha Dhanapala is a former UN Under-Secretary-General for Disarmament Affairs 1998-2003 and a former Ambassador of Sri Lanka to the USA 1995-97 and to the UN in Geneva and Vienna 1987-92. He is the current President of the Nobel Peace Prize-winning Pugwash Conferences on Science & World Affairs and Distinguished Associate Fellow of SIPRI. The views expressed are his own.  [IDN-InDepthNews – 4 April 2016]