Obama Must Say a Profound Sorry for Hiroshima 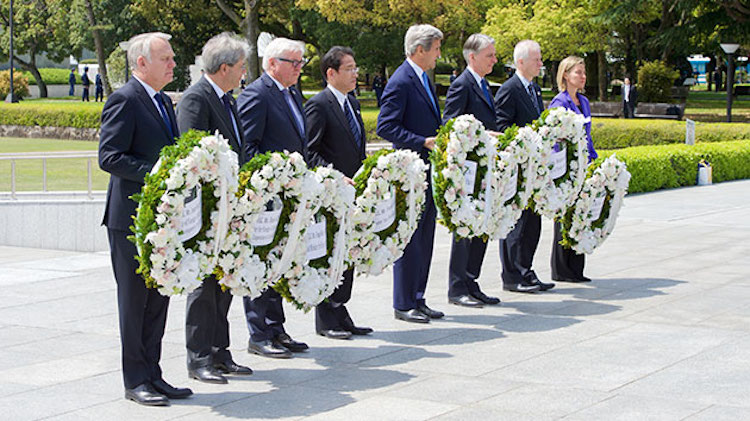 LUND, Sweden (IDN-INPS) - We were standing in Hiroshima looking at a stone wall. All there was to see was a shadow of a man. It had been etched into the wall at the moment of his obliteration by the blinding light of the first atomic bomb.

Olof Palme, prime minister of Sweden, stared hard at it. An hour later he gave a speech as head of the Independent Commission on Disarmament of which I was a member. “My fear”, he remarked, “is that mankind itself will end up as nothing more than a shadow on a wall.”

President Charles de Gaulle of France once observed, “After a nuclear war the two sides would have neither powers, nor laws, nor cities, nor cultures, nor cradles, nor tombs.”

What if, contrary to the received wisdom, it was shown that nuclear weapons played no role in the surrender of Japan at the end of World War 2, as has been their justification? Perhaps the terrible acts of Hiroshima and Nagasaki are no worse, despite their two hundred thousand deaths, than many other scathing memories of war waged against mainly civilian populations. Then we would have to start a big rethink of the value of nuclear arsenals.

Nuclear deterrence, many thoughtful generals have long concluded, is nonsense on stilts and long has been. New scholarship, benefiting from access to recently classified documents in Japanese, Soviet and US archives, is more grist for their mill. Scholars working on these papers now conclude that the Soviet Union’s invasion of Manchuria may have been more important that the nuclear bombardment in coercing the Japanese surrender.

Soviet scholars have been saying this for a long time- I first came across their arguments when I was at university in the 1960s. Yet Japanese historians willfully colluded with the US in telling a different story. The Japanese leaders did not want their people to believe they had not been smart enough strategists and could be outmanoeuvred by the Red Army. Rather they wanted the world to believe that they had been overwhelmed by a scientific breakthrough they could not have foreseen.

There was in fact nothing totally special about Hiroshima. The US conventional bombing attacks on Japanese cities in the spring and summer of 1945 were almost as devastating as Hiroshima. They often caused more damage and even more casualties. Altogether 66 Japanese cities were attacked that summer, and a typical raid of 500 bombers could deliver 5 kilotons of bombs. The Hiroshima bomb was the equivalent of 16 kilotons, only three times bigger than the average conventional raid.

Yet neither the conventional nor the nuclear bombing turned the heads of Japan’s leaders. Its Supreme Council did not meet until two days after the Hiroshima attack of August 6. Yet when the Soviets intervened on August 9 word reached Tokyo by 4.30 am and the Supreme Council met by 10.30 am. Following Hiroshima, Emperor Hirohito took no action. He merely asked for “more details”. But when he heard of the Soviet invasion he immediately summoned Lord Privy Seal Koichi Kido and told him, “In the light of the Soviet entry…. it was all the more urgent to find a means to end the war.”

Kido after the war confessed, “If military leaders could convince themselves they were defeated by the power of science but not by lack of lack of spiritual power or by strategic errors, they could save face.”

The Americans were only too happy to oblige in this 1945 political spin. If the bomb did it then the US had been the prime instrument in Japan’s defeat and US prowess would be enhanced throughout the world. But if the Soviets could convincingly claim it was their invasion of Manchuria that tipped the balance then Moscow could claim they did in four days what the US could not do in four years.

The Soviets were outmanoeuvred in the public relations battle by the self-interest of the Japanese and the American leadership.

It is time overdue for the Americans to say a profound sorry for Hiroshima and Nagasaki. They were unnecessary acts. They were only carried out because President Harry Truman believed wrongly that by hurrying the defeat of Japan by a handful of days it was the way to stop the Soviet advance in its tracks.

On May 26th Obama will be in Japan for the G7 heads of state meeting. When he gets  to Hiroshima he should bow his head and ask forgiveness for America's terrible deed. [IDN-INPS – 10 May 2016]

Note: Jonathan Power syndicates his opinion articles. He forwarded this and his previous Viewpoints for publication in IDN-INPS.

Copyright: This email address is being protected from spambots. You need JavaScript enabled to view it.