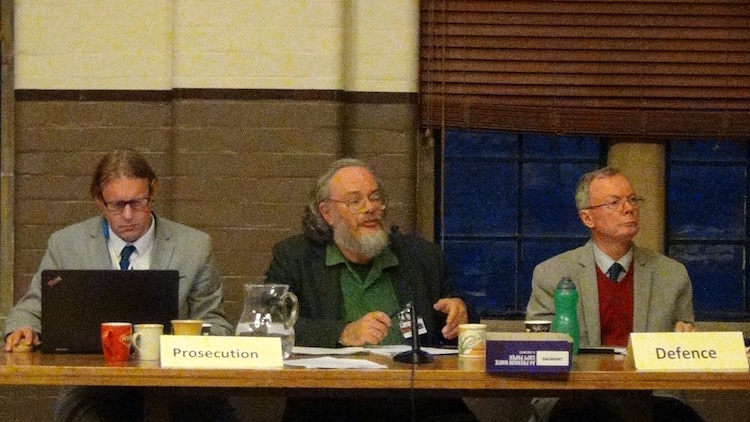 BERLIN | SYDNEY (IDN | UNFOLDZERO) - An International Peoples’ Tribunal on Nuclear Weapons and the Destruction of Human Civilisation held in Sydney handed down its judgement on August 16 affirming the illegality of any use or threat to use nuclear weapons and convicting the leaders of the nine nuclear-armed States of war crimes, crimes against humanity, crimes against peace and crimes of threatening, planning and preparing acts which would constitute genocide, ecocide and omnicide (the destruction of humanity as a species).

The tribunal also considered a test case against Malcolm Turnbull, the leader of Australia, which is one of the states under extended nuclear deterrence relationship with the United States. Turnbull was convicted for complicity, i.e. aiding and abetting the planning and preparation for the use of nuclear weapons, which would constitute a crime, and for making illegal threats to facilitate and support the use nuclear weapons.

The tribunal judges, Matt Robson of New Zealand and Dr Keith Suter of Australia, held that any use of nuclear weapons would violate international humanitarian law, as the impact of such weapons cannot be contained in either time or space. Regardless of how or where they are used, they will illegally impact on civilians in both current and future generations.

More seriously, the judges held that the policies of mass destruction using nuclear weapons constituted crimes of a particularly egregious nature. These amount to planning and preparing for acts, which could lead to genocide, ecocide and omnicide.

"The tribunal has emphasized that the use of a large number of nuclear weapons is – as we have known for the last 50-60 years or so – the end of civilization and possibly of humans as a species," said John Hallam, one of the organisers of the tribunal. "This is not new but bears repeating, and was accepted without question not just by the prosecution and the judges but by the defense also."

Another important factor of the Tribunal’s decision is that it affirmed that the leaders of the nuclear-armed States and the allied States have personal responsibility for the illegal policies and practices of their governments. "The Nuremberg and Tokyo trials, the Ad hoc Tribunals for Rwanda and the former Yugoslavia, and the International Criminal Court reflect the reality that it is people who make the decisions on State policy," said Alyn Ware, Chief Prosecutor for the tribunal. "And they uphold the principle these people cannot evade responsibility by hiding behind the elusive cloak of State security. Today, in the decision of this tribunal, human security has triumphed."

Indeed, according to Professor Peter King, the visionary advocate who initiated and co-organised the tribunal, "Nuclear weapons are not even a true source of State security. Rather, the inherent paradoxes in nuclear deterrence make nuclear weapons a prime cause of insecurity, and a nuclear catastrophe inevitable if nuclear weapons continue to exist." Sadly, Professor King passed away a week before the tribunal announced its decision. The judges, prosecution and defence paid tribute to him on August 16.

Finally, in an innovative approach upholding restorative justice rather than retribution, the judges imposed the injunctive relief requested by the prosecution. This included ordering the defendants to adopt and implement national legislation affirming the illegality of the threat of nuclear weapons, decommissioning all nuclear weapons as a prelude to their dismantlement and destruction; and to immediately enter or initiate multilateral negotiations in good faith for the complete prohibition and elimination of nuclear weapons under strict and effective international control.

The judges also ordered the defendants, specifically to participate in the deliberations of the Open Ended Working Group set up by the United Nations General Assembly under Resolution 70/33 entitled: Taking forward multilateral nuclear disarmament negotiations. Those deliberations in Geneva are expected to be followed up by the start of multilateral nuclear disarmament negotiations in 2017.

The judges and prosecution realise that they have now power to compel the leaders of the nuclear armed States (and Australia) to comply. However, by clarifying the illegality and criminality of nuclear weapons, and outlining what is required to comply, the tribunal could have an important impact.

"The London Nuclear Warfare Tribunal in 1985 paved the way for the case of legality of nuclear weapons to be taken to the International Court of Justice less than a decade later," said Ware. "Similarly, if the leaders of the nuclear armed and allied states do not comply with the injunctions laid against them by this tribunal, we might see criminal charges laid against them in a national or international court sometime in the future."

The Tribunal was held at the University of Sydney co-sponsored by the Centre for Peace and Conflict Studies (Human Survival Project), Sydney Centre for International Law (SCIL) at Sydney University, People for Nuclear Disarmament (PND) NSW and Aotearoa Lawyers For Peace (New Zealand). [IDN-InDepthNews – 17 August 2016]

Photo: Prosecution and Defence benches at the Tribunal. Credit: UnfoldZero