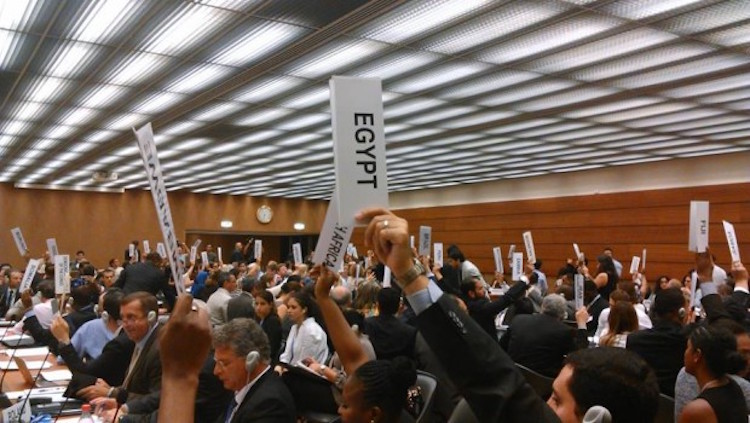 GENEVA (IDN) - In what the International Campaign to abolish nuclear weapons (ICAN) calls "a dramatic final day", a group of non-nuclear countries have pushed through a proposal to initiate negotiations in 2017 to prohibit nuclear weapons of mass destruction.

The UN Open Ended Working group on nuclear disarmament (OEWG) wrapped up on August 19 the third series of sessions that have been convened since February, by adopting a recommendation to the United Nations General Assembly in October to initiate negotiations on a legal instrument to prohibit nuclear weapons, leading to their elimination. [P19] JAPANESE TEXT VERSION PDF

In a recorded vote on the proposal, 62 countries supported (all non-nuclear states), 27 countries opposed (mostly NATO countries plus South Korea), and 8 countries abstained (among them were Sweden, Switzerland and Japan).

The Ambassador of Mexico, the country that had initiated the OEWG, called this "the most significant contribution to nuclear disarmament in two decades".

Following the adoption of the report, UNFOLD ZERO, Parliamentarians for Nuclear Non-proliferation and Disarmament and ICAN made statements at the OEWG session commending the work of the OEWG, and giving support for the nuclear disarmament negotiations in 2017.

The majority support for the ban treaty was clearly underlined by joint statements delivered by Africa, Latin America and the Caribbean, Southeast Asia and the Pacific as well as statements from several European states.

However, resistance continued to come throughout the working group from a small group of states who persisted that nuclear weapons are essential to their national security.

Despite threatening to block a report, which contained a recommendation for a ban treaty, these governments did not have the leverage to thwart the successful outcome of the group, ICAN said.

After long deliberations, it seemed that States were going to agree to a compromised report, which reflected the views of both sides of the ban treaty issue. But, after this agreement had seemingly been secured behind closed doors, Australia made a last-second turnaround and announced that it was objecting to the draft of the report and called for a vote.

In spite of the opposition from Australia and several other pro-nuclear weapon states, the majority was able to carry the day, ICAN reported. On that basis, the working group was able to recommend the start of negotiations on a new legal instrument prohibiting nuclear weapons.

"This breakthrough is result of the new global discourse on nuclear weapons. Bringing together governments, academia and civil society, a series of three conferences have uncovered new evidence about the devastating humanitarian impact of nuclear weapons and the risks of their use, whether accidental or intentional," ICAN noted in a statement.

The momentum generated by the “humanitarian initiative” has now culminated with the international community on the verge of negotiating a nuclear weapons ban, it added.

Nuclear weapons remain the only weapons of mass destruction not yet prohibited under international law, despite their inhumane and indiscriminate nature.

A ban would not only make it illegal for nations to use or possess nuclear weapons; it would also help pave the way to their complete elimination. Nations committed to reaching the goal of abolition have shown that they are ready to start negotiations next year.

It is now up to the October meeting of the UN General Assembly First Committee to bring forward this process by issuing a mandate to start the negotiating process, ICAN said.

"To what extent the deep and growing polarization that exists between nuclear disarmament and deterrence enclaves within the broader nuclear policy community can be bridged, remains an open question," says Jenny Nielsen, Postdoctoral Fellow at the Vienna Center for Disarmament and Non-Proliferation (VCDNP) in a blog for the European Leadership Network.

"Whether the appetite exists at this time for bridging efforts – particularly with the growing momentum (formalized through the OEWG) to convene a conference in 2017 to negotiate a ban instrument on nuclear weapons – is more doubtful," maintains Nielsen.

It would befit states and analysts to engage in timely and constructive discussions on what viable alternative and options for maintaining strategic stability (as well as providing security assurances and insurance against uncertainties) – beyond the contested reliance on nuclear weapons – exist, adds Nielsen.

"This is particularly prudent in light of emerging technologies, which may offer both challenges and alternatives to strategic stability based on nuclear deterrence. Left unbridged, the polarized views on the role and value of nuclear weapons won’t bring positive contributions towards reducing the risk of nuclear weapons use and a secure world free of nuclear weapons." [IDN-InDepthNews – 19 August 2016]