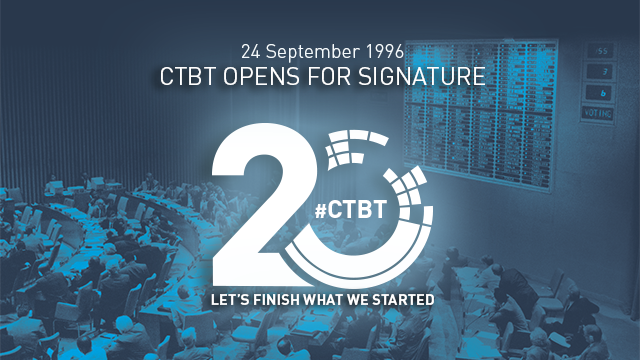 Tariq Rauf is Director of the Disarmament, Arms Control and Non-Proliferation Programme at the Stockholm International Peace Research Institute (SIPRI), formerly the Head of Verification and Security Policy Coordination at the International Atomic Energy Agency.

STOCKHOLM (IDN) –On September 21, three days before the 20thanniversary of the opening for signature of the Comprehensive Nuclear-Test-Ban Treaty’s (CTBT), several foreign ministers and other high-level representatives of UN Member States met in New York and united in a call for the prompt entry-into-force of the treaty.

UN Secretary-General Ban Ki-moon recalled that, “This year is the twentieth anniversary of the treaty’s opening for signature. But this is not a celebration. It is a stark reminder of the work that remains”.

On September 24, 1996, U.S. President William J. “Bill” Clinton was the first to sign the CTBT at United Nations Headquarters in New York and referred to the treaty as “the longest-sought, hardest-fought prize in arms control history”.

The opening for signature of the CTBT in September 1996 marked the culmination of a half-century long effort that witnessed more than 2,060 nuclear test explosions, to ban nuclear testing forever.

As of today, 183 States have signed the treaty of which 164 have ratified it. On September 15, a 'Joint Statement' on the CTBT was made by the nuclear Non-Proliferation Treaty (NPT) nuclear-weapon States that said that “a nuclear-weapon test explosion or any other nuclear explosion would defeat the object and purpose of the CTBT” and urged all States that have not done so to sign and ratify the treaty.

The CTBT has an unusual formula for achieving its entry-into-force – 44 named States have to sign and ratify. Of these, 36 States have already signed and ratified but 8 States are holding up entry-into-force. China, Egypt, Iran, Israel and the US have signed but not ratified. India, North Korea and Pakistan have yet to even sign.

On October 14, 1999, the U.S. Senate delivered a crushing blow by rejecting ratification of the CTBT, marking the first such rejection of an internationally negotiated pact since rejection by the U.S. Senate of the Treaty of Versailles in 1920 that led to the collapse of the League of Nations and later the advent of the Second World War.

Now in the twilight of his term in office, U.S. President Barack H. Obama in a last ditch effort to promote the CTBT is trying to push through a resolution at the UN Security Council under the framework of Chapter VII of the UN Charter which would make the resolution legally binding on all UN Member States.

The draft resolution calls upon: all States to refrain from carrying out nuclear-weapon test explosions; urges all States that have either not signed or not ratified the treaty, particularly the 8 States, to do so without delay; and expresses support for the International Monitoring System (IMS) of the CTBT Organization (CTBTO).

Pursuit of measures legally binding on all UN Member States through chapter VII resolutions of the Security Council, such as 1887 (2009), 1540 (2004) and 1373 (2001), is highly problematic as this procedure bypasses international forums mandated to multilaterally negotiate conventions and treaties on nuclear disarmament and non-proliferation such as the Conference on Disarmament in Geneva.

It also reflects the tendency of the five permanent members of the Security Council to push through measures without the full involvement of the broader UN membership and thus is internationally unrepresentative and lacks legitimacy.

This tactic by the Obama administration could well backfire with dire consequences for the CTBTO, as already 34 U.S. Senators have formally sent to the White House their constitutional objections to this course of action and have threatened to prevent the authorization or appropriation of approximately $ 32 million per year provided by the U.S. to the CTBTO, which is 25% of its budget.

A funding cut off by the U.S. Congress would be disastrous for the CTBTO. As such, a Security Council resolution on the CTBT though based on noble aspirations could be undesirable and unproductive.

A Security Council resolution by itself cannot create nor establish any new legally-binding internationally accepted norm against nuclear weapons testing, whether or not adopted under chapter VII of the Charter. Though, it can raise the political costs of nuclear testing in the future by States such as North Korea or India, neither of which have signed the CTBT.

On the other hand, the Joint Statement on the CTBT made by the NPT nuclear-weapon States, referred to above, is a welcome development that should be commended by all States party to the NPT and heeded by the non-signatory States to the NPT.

The CTBT is a fundamental pillar of the global nuclear disarmament and non-proliferation regime, second in importance only to the 1968 nuclear Non-Proliferation Treaty (NPT).

The NPT with 191 States parties is the world’s most widely adhered to multilateral nuclear arms control agreement. While the NPT provides the walls of the nuclear arms control structure by prohibiting non-nuclear weapon States from developing nuclear weapons and placing all of their nuclear material and activities under international verification, the CTBT provides the roof by banning all types of nuclear explosive tests in all environments forever.

The world’s first nuclear explosion, the “Trinity” test, was carried out at 05:29:45 on July 16, 1946 at Alamogordo in New Mexico in the U.S. The Soviet Union followed suit on August 29, 1949 and the United Kingdom on October 3, 1952. By the mid-1950s, both the Soviet Union and the United States were regularly testing high-yield thermonuclear weapons in the atmosphere leading to widespread radioactive fallout in the southern and northern hemispheres.

It took one of the leaders of the Non-Aligned Movement countries, Prime Minister Jawharlal Nehru of India, to first propose a “standstill agreement” on nuclear testing in 1954.

But, it took the Cuban missile crisis of October 1964, which brought the U.S. and the USSR close to a nuclear war, to reach agreement in 1963 on the Partial Test Ban Treaty (PTBT) that banned nuclear testing in the atmosphere, in outer space and under water.

The 1968 NPT included a call for a permanent end to all nuclear testing that was not heeded until 1995, when as part of indefinitely extending the treaty States parties decided to complete negotiation on a CTBT no later than 1996.

Within weeks of agreeing to this, both China and France resumed nuclear testing and only stopped in 1996 after universal international condemnation. Negotiations on the CTBT were completed in the Conference (CD) on Disarmament during the summer of 1996, but then India vetoed its adoption by the CD.

Consequently, Australia along with 127 co-sponsors submitted the CTBT to the UN General Assembly, which adopted it on September 10, 1996 by a vote of 158 in favour and 3 against (Bhutan, India and Libya). The CTBT then opened for signature on September 24, 1996 and was signed on that date by 71 States including the five nuclear-weapon States (China, France, Russian Federation, United Kingdom and United States).

The first blow against the CTBT was inflicted in May 1998 when India, which had refused to sign the treaty carried out a series of nuclear tests; not to be outdone, Pakistan followed with its own series of tests. Less than a decade later, in 2006 North Korea carried out its first test and remains the only country testing nuclear weapons in the 21st century.

Eight countries named above are holding up the entry-into-force of the CTBT. Without this the CTBTO cannot carry out on-site inspections to investigate allegations of clandestine nuclear tests. Speaking at a SIPRI event organized in Vienna in April 2015, Dr Zerbo of the CTBTO warned:

“As we approach the 20th anniversary of the opening for signature of the CTBT, we must not lose the sense of urgency in bringing this Treaty into force. It is indeed disheartening that while the importance of the entry into force of the CTBT has been widely recognized by the international community, it is yet to be reached.

"If the international community is serious about the CTBT, then then it must act. That political will must be felt. Those countries that have continued to block the entry into force of the Treaty need to hear from their friends and allies that the CTBT is and will continue to be a top priority in the efforts to prevent the spread of nuclear weapons and reduce the nuclear threat.

"The entry into force of the CTBT is not just the responsibility of any one group of states. The CTBT represents the culmination of a decades-long endeavour by the international community, both scientific and technical, but also diplomatic and political, to put an end to nuclear testing by anyone, anywhere, for all time. And the world is already reaping the benefits of the Treaty even though it has not yet entered into force.

"An unwelcome but powerful illustration of the value of the CTBT verification system was the nuclear test conducted by the Democratic People’s Republic of Korea (DPRK) on February 12, 2013; the third such event following the 2006 and 2009 announced nuclear tests. The event was detected by 94 IMS seismic stations, and data was made available to Member States approximately one hour after its receipt by the IDC – more than ninety minutes before the DPRK publicly announced the test.

"On April 9 and 14, 2013, the Takasaki radionuclide station in Japan detected a significant quantity of Xenon isotopes consistent with a fission event occurring approximately 55 days prior to the measurement – coinciding with the February 12 event. The Xenon detection was shown to be consistent with the DPRK announced nuclear test.

"There is a fundamental point to be underscored here. No national system was able make this detection and associate it with the DPRK test – even those with the most advanced and extensive capabilities. This is a true testament that multilateral verification is effective, reliable and necessary for moving toward a world free of nuclear weapons.

For we must not stop asking ourselves what the consequences of failure to bring the CTBT into force would be, including to the credibility of the NPT and the international non-proliferation regime as a whole – in other words, on humanity’s most precious asset, and the condition for our well-being and that of future generations: peace and security."

Since that statement was made, North Korea has conducted two more nuclear tests this year – in January and in September. None of the eight States holding up entry-into-force of the CTBTO have made an iota of progress and none seems to be in the offing. To make matters worse, none of the 48 States that form the Nuclear Suppliers Group (NSG) have had the wisdom or deemed it fit to make CTBT adherence a pre-condition for considering the membership applications of India and Pakistan.

Overall the environment for nuclear disarmament and arms control is fast deteriorating and a new Cold War has started. Binding obligations undertaken by the nuclear-weapon States under the NPT are not being implemented, efforts to start multilateral negotiations on a convention or treaty to outlaw nuclear weapons are stymied, nuclear force modernization is underway in the nuclear-armed States, thousands of tonnes of weapon-usable nuclear material remain outside any international accountability or monitoring, and the role of nuclear weapons in the military postures of the nuclear-armed States is on the increase, to note but a few destabilizing trends.

In light of these depressing developments, a large group of non-nuclear-weapon States is likely to push through a resolution at this year’s UN General Assembly on starting multilateral negotiations on banning nuclear weapons even though the nuclear-armed States and their allies will oppose and boycott the proceedings.

Another resolution on the CTBT will be adopted by the General Assembly but to what effect? The CTBT remains “unfinished business” from the legacy of the Cold War; it is time that the business is completed of finally putting an end to all nuclear explosions in all environments for all time and to reap the civilian and scientific benefits for humanity of the IMS, which is the world’s most extensive international verification and monitoring system. [IDN-InDepthNews – 22 September 2016]