Next US President Has a Nuclear Option: Scrap the Program 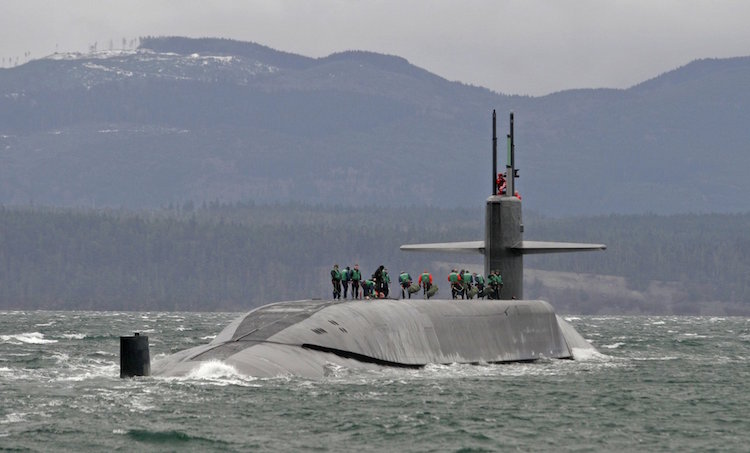 David Hall, of Lopez Island, and Leonard Eiger, of North Bend, are active members of Ground Zero Center for Nonviolent Action and Physicians for Social Responsibility.

SEATTLE (IDN | The Seattle Times) - Have you seen the Seattle bus ads? They read: “20 miles west of Seattle is the largest concentration of deployed nuclear weapons in the U.S.”

In light of recent media attention on who should have their finger on the nuclear button, this statement seems to beg the question: With so many nuclear weapons, what would happen should the president order their use?

One hydrogen bomb deployed from Naval Base Kitsap on Hood Canal could wipe out a large city like Seattle and make the land uninhabitable for centuries. Look up the presentation “One city, one bomb” to understand the devastating potential of modern nuclear weapons.

The United States is the only nation to have used nuclear weapons against another, and we have led the nuclear arms race from its beginning in 1945. Now Congress and the Obama administration have adopted a trillion-dollar plan to rebuild the entire nuclear-weapons complex, including replacement of the Trident submarine fleet on Hood Canal, over the next 30 years. Trident submarines are considered the deadliest weapon ever built.

When our leaders warn that “all options are on the table,” they are threatening to use nuclear weapons. This has happened dozens of times since WW II, including during the Korean and Vietnam wars.

Once the current international prohibition against using nuclear weapons is breached, the door is open for every nuclear-capable nation to use nuclear weapons.

Climate scientists have modeled a “small” nuclear war between India and Pakistan assuming 50 Hiroshima-sized bombs from each side targeting cities. Smoke and soot would be lofted by superheated air into the upper atmosphere, lowering temperatures in the Northern Hemisphere enough to reduce agricultural production for a decade. That’s how 2 billion food-insecure people in South Asia and China could starve to death.

This is our policy: to threaten these consequences. But decision-makers are not calculating the scale of devastation built into a single nuclear warhead, much less the thousands they plan to maintain throughout this century. Because the U.S. is building up its nuclear capability, other nuclear nations are

Think the Cuban missile crisis to understand Russian fears of the proximity of U.S. nuclear weapons. The Cuban missile crisis, often described as the closest humankind has come to incinerating itself, was caused by nuclear weapons in proximity to U.S. shores. And the recent coup in Turkey could have put 50nuclear warheads in potentially unstable hands.

Washington state sits at the center of U.S. nuclear policy for our deployed nuclear weapons at Naval Base Kitsapand for the largest Superfund site in our hemisphere at the Hanford nuclear reservation. Plutonium production for U.S. nuclear weapons left millions of gallons of highly corrosive and radiologically lethal sludge that we may never be able to safely dispose.

We are looking for leaders who understand that nuclear weapons are immoral and must never be used. Nuclear weapons threaten genocide on a scale that decision-makers refuse to talk about. The use of nuclear weapons are illegal under the laws of war and humanitarian law — unusable because there is no secure way to limit escalation, exorbitantly expensive and are a massive diversion of human talent and resources away from diplomacy, foreign assistance, innovation and public health.

U.S. priorities in the world are clearly written into our national budget.For the sake of future generations, we ask, “What will be the priorities of the next administration?”

This article was originally published in The Seattle Times and is being reproduced by arrangement with the writers. [IDN-INPS – 28 September 2016]

Photo: The USS Ohio sailing in the Strait of Juan de Fuca. The Trident nuclear submarine has been converted to a guided missile submarine. It was first launched in 1979, and was the original nuclear submarine in the U.S. Pacific Fleet stationed at what is now Naval Base Kitsap. (Steve Ringman/The Seattle Times)