The Legacy of the Reykjavik Summit – The Road Ahead 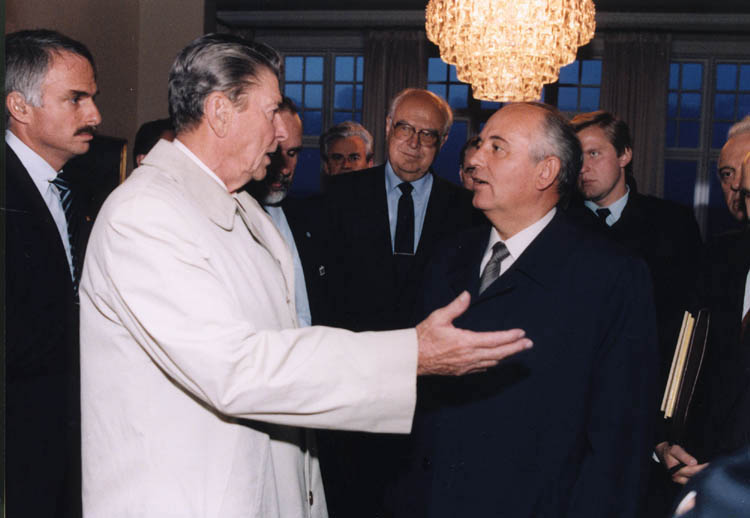 This is an expanded version of thoughts expressed by the author at a conference organized by the International Peace Institute (IPI) with the Foreign Ministry of Iceland on October 10-11 to commemorate the 30th anniversary of the Summit meeting between U.S. President Ronald Reagan and his Soviet counterpart Mikhail Gorbachev.

REYKJAVIK (IDN) - Richard Rhodes, the famous author of several books on nuclear weapons, including the Pulitzer Prize-winning “The Making of the Atomic Bomb” (1986), has written a play entitled “Reykjavik” dramatizing the famous Summit. At the conclusion he has Gorbachev say, “Reykjavik is not a failure – it’s a breakthrough”.

After announcing the release of scientist Andrei Sakharov and his wife Yelena Bonner, Gorbachev goes on to say, “I think we can agree: this base camp of ours marks the end of the Cold War. Where we go from here is up to us – all of us.”

Where, indeed, did we go to arrive, thirty years later, at today’s situation of over 15,000 nuclear weapons among nine nuclear weapon armed countries – three more than there were in 1986 – and tensions which some see as the beginning of a new Cold War?

Three years after Reykjavik, in 1989, the Berlin Wall fell symbolizing the end of the Cold War. Over a decade earlier, in 1975, the Helsinki Accords had already provided, with its Decalogue, a framework for the détente to end Cold War rivalry.

The OSCE was the ideal post Cold War structure on which to build peace and security. Instead NATO was strengthened and expanded. The Strategic Defence Initiative (SDI) project, a result of Reagan’s so-called Cheyenne Mountain “epiphany” which, despite the U.S. deterrence doctrine and its huge arsenal of nuclear weapons, was touted as the ultimate defence shield against Soviet missiles.

It was the stumbling block to what could have been a historic agreement in this city thirty years ago.

SDI has been transformed into the Ballistic Missile Defence systems, which are now based in Europe ostensibly to counter an Iranian threat even after the Joint Comprehensive Plan of Action (JCPOA) and these, reportedly, are obstacles to further U.S.-Russian nuclear arms control – current tensions notwithstanding.

A CTBT was achieved in 1996 because the nuclear weapon states agreed to sub-critical testing in laboratories, which were also lavishly funded under the “Stockpile Stewardship Programme”. However, in 1986 Reagan could not accept Gorbachev’s proposal that SDI be tested in laboratories and not in space.

The Reykjavik Summit took place during my period as my country’s Ambassador to the Conference on Disarmament in Geneva and had a deep impact on multilateral disarmament especially on our efforts in that forum to prevent an arms race in outer space.

Reykjavik has been widely regarded as one of the most important missed opportunities in the history of nuclear disarmament. We were then tantalizingly close to a nuclear weapon free world with the stroke of a pen – a vision of which another U.S. President would announce 23 years later albeit with the discouraging caveat that it would not be in his lifetime.

However the boldness of the Reykjavik vision remained as a lodestar. The policy remained that “a nuclear war cannot be won and must never be fought”. It must continue in the road ahead.

During the Cold War the Soviet Union’s overwhelming conventional arms superiority was said to be neutralized by a U.S. nuclear capability. The situation seems to have reversed today.

Comparing the nuclear doctrines of the USA and Russia, Alexei Arbatov has written, “The official Russian strategic concept has only two differences from the 2010 U.S. Nuclear Posture Review. One is that the United States is apparently willing to defend its allies with the use of nuclear weapons if they are attacked by overwhelming conventional forces, whereas Russia does not provide such assurance. The other is Russian readiness to use nuclear arms if facing the prospect of defeat by large-scale conventional aggression, while the United States does not envision such a contingency.”

One possibility being reported on is a U.S. declaration of a No First Use policy on nuclear weapons, which will be a radical change of nuclear doctrine as formulated in the U.S. Nuclear Posture Review.

In 2010 Obama asserted that U.S. nuclear weapons would not be used against NNWS (non-nuclear weapon states) in good standing with the NPT – no doubt as determined by the U.S. He resisted efforts to go the extra mile and to foreswear first use of nuclear weapons.

Now he seems ready to do that despite alarmist cries from sections of the Pentagon and some Pacific allies like Japan. It is the only legacy that will be consistent with his Prague 2009 speech and the vision of a nuclear weapon free world.

While China and India have long claimed to have a No First Use policy, as the Asian Pacific Leaders Network (APLN), of which I am a member, stated:

“No First Use policy would have both symbolic value and significant practical implications. Its potential benefits greatly exceed possible downsides. It would encourage a shift away from high-risk doctrines and weapons deployments. A NFU policy would avoid the need for forward deployment, launch-on-warning postures, and pre-delegation of authority to battlefield commanders, significantly dampening the prospects of accidental and unauthorized use. It would also speak to the world’s growing humanitarian concerns on nuclear weapons.

"If adopted by all nuclear armed states, the policy could become the centrepiece of a global nuclear restraint regime, strengthen strategic stability, mute crisis instability, solidify the boundary between nuclear and conventional weapons, and further entrench the non-use of nuclear weapons norm.”

The question remains whether the hawks in the U.S. will allow this major change. If implemented it would relieve pressure on the NWS (nuclear weapons states) within the NPT. U.S. Secretary of Defence Ashton Carter is reported to have rejected a “No first Use” policy.

However another contradiction remains involving the modernization programme of U.S. nuclear weapons. As a New York Times editorial stated: “The Air Force has formally begun the process of asking defense contractors to submit proposals for a new long-range cruise missile and a new land-based intercontinental ballistic missile. These two weapons, capable of carrying nuclear payloads, will cost billions of dollars. The first is unnecessary; the second, debatable.

"The invitations are ostensibly aimed at modernizing the nation’s nuclear arsenal. The weapons’ dubious value aside, the requests also seem to contradict President Obama’s 2009 promise to change American nuclear policy in ways that would make the nation safer by reducing threats from the world’s most lethal weapons.”

Modernization is being adopted by all NWS at huge costs. Whether the proposed changes in U.S. nuclear policy by Obama will be followed up by his successor is of course unpredictable. Arguing against plans to rebuild Cold War nuclear arsenals former U.S. Defence Secretary William Perry wrote in the New York Times recently, “There is only one way to win an arms race: Refuse to run”.

The road ahead is complicated by the changed global situation, which has moved from the bipolarity of the 1980s to the multipolarity of today with more non-NPT nuclear-armed nations. The U.S. is going to spend $358 billion in the next 10 years modernizing the three legs of its nuclear triad and more than a trillion dollars over the next three decades in modernizing all aspects of its nuclear weapons program. The Russian Federation is doing the same thing. So is China.

Robert Legvold, in an interview with the Carnegie Council for Peace, has stated: “The Pakistanis have the most rapid development of short-range, including battlefield tactical nuclear weapons, in a theory that if India attacks again conventionally, where they have conventional superiority and another Mumbai terror attack, they will respond with battlefield nuclear weapons that will be delivered by a missile called the Nasr.”

Legvold continues ominously: “That can be done without nuclear escalation if it is done on their own territory. India's only nuclear doctrine at this point is, if any nuclear weapon is used against us, even if it is a battlefield tactical nuclear weapon, our response will be with massive retaliation, countervalue. That means cities and otherwise. There are four to six minutes between any major population center on both sides, not enough for any kind of early warning system to work.”

Thus we are in a far more complex and dangerous nuclear world than in 1986. A nuclear exchange whether by political intent or accident is far more likely today. That is why result-oriented negotiations must begin now on a nuclear weapon free world.

Several steps are urgently needed – some of them even before a new President is inaugurated in Washington DC. They include:

- The ratification of the CTBT by the eight countries – US, China, India, Pakistan, DPRK, Egypt, Israel and Iran to enable the entry into force of this important treaty.

- Urgent resumption of the Six party talks with DPRK preceded by a bilateral DPRK-USA meeting in Beijing.

- U.S.-Russian negotiations of a new nuclear arms control agreement with deep cuts and a stand down of their high alert strategic nuclear forces recommitting to the 1987 INF Treaty.

- Dismantling of U.S. BMD systems in Eastern Europe in return for CBMs by Russia allaying concerns in East Europe and the Baltic States and beginning negotiations on U.S. battlefield nuclear weapons stationed in Europe.

- Commencement of negotiations on a Nuclear Weapon Convention as recommended by the majority in the OEWG NWS and in the resolution introduced at the current UNGA.

- Appointment of a special negotiator for the MEWMDFZ by the EU to report to the 2020 NPT Review Conference.

Let me conclude with the fervent wish that future leaders of the USA and Russian Federation, as possessor nations of over 90% of the world’s nuclear warheads will both be able to say, at the conclusion of a Convention eliminating all nuclear weapons, in the words of the American poet Robert Frost – not ‘ages and ages hence’ but in our lifetime

“Two roads diverged in a wood, and I –

I took the one less traveled by,

And that has made all the difference.”

*Jayantha Dhanapala is a former UN Under-Secretary-General for Disarmament Affairs and a former Ambassador of Sri Lanka. He is currently President of the Pugwash Conferences on Science & World Affairs. [IDN-InDepthNews – 13 October 2016]