Kudos for Kazakh Commitment to Peace and Nuke-Free World 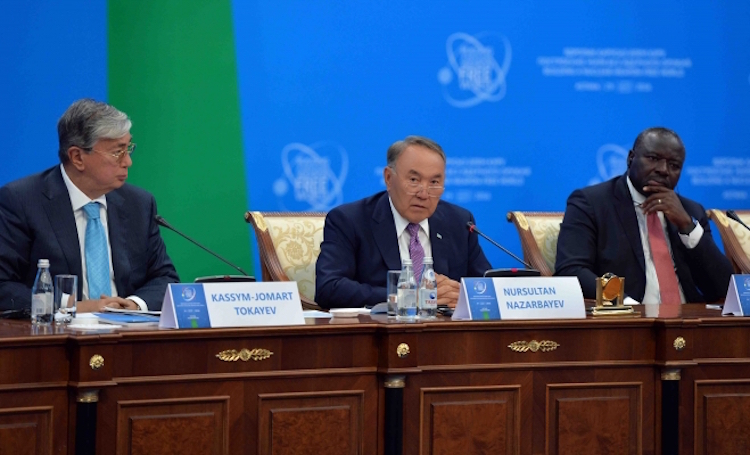 NEW YORK (IDN) – A close look at the voting on a ground-breaking resolution adopted by the Disarmament and International Security Committee of the United Nations General Assembly on October 27 underlines Kazakhstan's unflinching commitment to a nuclear-weapons free world. And a U.S. foreign policy expert has commended this.

The resolution Taking forward multilateral nuclear disarmament negotiations approved by 123 votes – as against 38 rejections and 16 abstentions – establishes a UN conference in 2017 "to negotiate a legally binding instrument to prohibit nuclear weapons, leading towards their total elimination".

While Kazakhstan voted for the resolution, Japan which was elected co-chair of the ninth Conference on Facilitating the Entry into Force of the CTBT on September 29, 2015 in New York, opposed the resolution. The reason: it is one of the countries protected by the U.S. nuclear umbrella.

As of today, 183 States have signed the treaty of which 164 have ratified it. But eight States are holding up CTBT's entry-into-force. China, Egypt, Iran, Israel and the U.S. have signed but not ratified. India, North Korea and Pakistan have yet to even sign. In order to achieve the universality of the Treaty, every single ratification counts.

Two days after Japan opposed the UNGA resolution calling for a 'Nuclear Weapon Convention', a world-renowned actor Ken Watanabe (57) expressed his resentment on his own twitter stating: "Where is this country heading to".

Japan's Foreign Minister Fumio Kishida, explaining the reason why Japan, the only country that suffered from atom bombing attacks, voted against the resolution, said in a press conference on October 28: "The resolution would accelerate and deepen the divide between Nuclear weapon states and Non- Nuclear Weapon states."

In contrast to Japan's refusal to cross the Rubicon, Kazakhstan's President Nursultan Nazarbayev not only closed down the now-defunct Soviet Union’s nuclear weapon testing in the east of the country. The Central Asian republic has also been in the forefront of the global campaign to end nuclear testing and to warn against the dangers of nuclear weapons.

It was at the initiative of Kazakhstan, together with a large number of sponsors and co-sponsors that the 64th session of the United Nations General Assembly on December 2, 2009 unanimously adopted resolution 64/35 declaring August 29 the International Day against Nuclear Tests.

Thanks to its commitment to international peace and dialogue, Kazakhstan is the first Central Asian country to be elected as non-permanent member of the UN Security Council for 2017-2018 beginning January 1.

"This is a good opportunity to strengthen the relations between Washington and Astana," says Stephen Blank, a Senior Fellow, American Foreign Policy Council, in an article for The Hill.

He adds: Because of its strategic inheritance of the Soviet nuclear testing and intercontinental ballistic missile deployment, Kazakhstan has staunchly championed international nuclear disarmament and peace through strong support for non-proliferation, creation of the Conference on Interaction and Confidence Building Measures in Asia (CICA), and an exemplary religious tolerance and dialogue.

More than many others, writes Blank, Kazakhstan bases on dialogue among the great powers and tolerant domestic policies. But Russia, Iran, Saudi Arabia and other authoritarians, with which Washington deals on a regular basis, have been long members of UN agencies like the Human Rights Council, he adds.

Only egregious conduct in Syria led to the vote against Russia, as it sought to extend its membership in the Council. Kazakhstan can work on strengthening democratic institutions, while contributing to international security, Blank stresses.

Moreover, explains Blank, the real criterion for Security Council membership is, like it or not, a state’s contribution to the maintenance of peace. And here Kazakhstan gets highest ranks. Many commended Kazakhstan’s inclusiveness and willingness to promote mediation as it offered to do in the 5+1 talks with Iran.

While the past chairman of the Organization of Islamic Cooperation (OIC), it has strong ties to Israel and Arab states, and good bonds with both Ukraine and Russia. It has maintained the peace at home, treating its large Russian diaspora with equality, states Blank.

"President Nursultan Nazarbayev’s “multi-vector” foreign policy (his own term) that has allowed Kazakhstan to have outstanding relationships with Beijing, Moscow, Washington, and Brussels, continues to be carried out despite growing international tensions."

Blank urges the U.S. to welcome Kazakhstan to the Security Council because it signals Central Asia’s growing importance. "Former Soviet Islamic terrorists are active in Syria and Afghanistan, and some of the region’s governments are in a precarious security situation. They face serious economic, environmental, and potentially terrorist challenges that the UN must address through the Security Council," he argues.

For that, Kazakhstan needs to be within the UN’s corridors of power to galvanize members and UN subsidiaries into action. "Kazakhstan’s membership in the Council will serve as an excellent way of calling the UN members’ attention to the importance of Central Asia for China’s Belt and Road initiative, and to Russia-led Eurasian Economic Union, of which it is a member, as well as the potential for constructive international engagement by all the powers."

Blank is of the view that the sum total of these policies demonstrates Kazakhstan’s conviction and willingness to act in world affairs in ways that champion both regional and international security and stability.

"Kazakhstan deserves to be rewarded and encouraged not least because it can serve as a model for other current and future members of the Security Council to emulate. International cooperation and integration is likely to encourage Kazakhstan to strive towards more transparency, good governance, and the rule of law."

Great powers might not like to hear it, but they could stand to learn something from Kazakhstan as a new member of the Security Council, Blank concludes. [IDN-InDepthNews – 06 November 2016]