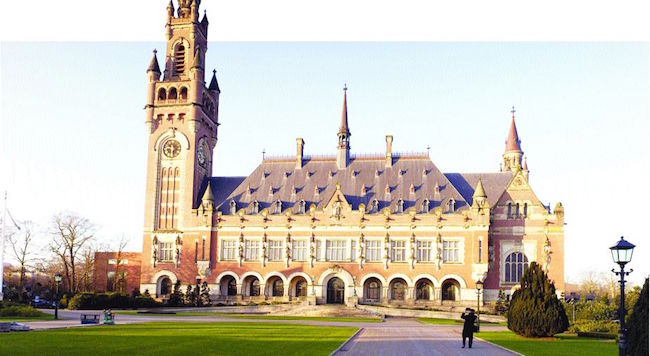 MUMBAI (IDN-INPS | The Statesman) - In the first ever nuclear disarmament challenge brought before the International Court of Justice (ICJ) by any member state, the ICJ recently in the case Regarding Obligations Concerning Negotiations Relating to Cessation of the Nuclear Arms Race and to Nuclear Disarmament dismissed the suits on a preliminary issue. It was also for the first time the World Court found that it has no jurisdiction on the sole basis of the non-existence of a dispute between the parties.

In a sharply divided decision, the 16 Judge World Court dismissed three identical cases brought by the Marshall Islands against India, Pakistan and UK. Allowing the objections to the jurisdiction, the International Court of Justice refused to proceed to the merits of the case.

Though Marshall Islands filed cases against all the nine nuclear powers, only those against India, Pakistan and UK were docketed as they had submitted to the Court's compulsory jurisdiction. ICJ already failed to take up cases against the other countries ? China, North Korea, Russia, France, Israel and the United States ? as they have not recognized the Court's jurisdiction.

France withdrew from the jurisdiction of the ICJ in 1974 as a result of the Nuclear Test Cases (Australia v. France; New Zealand v. France). ICJ's ruling in the Case Concerning Military and Paramilitary Activities In and Against Nicaragua (Nicaragua v. USA) in 1986 prompted the USA to withdraw from the ICJ's compulsory jurisdiction. Again in 2004, USA even withdrew from the Vienna Convention's Optional Protocol submitting to ICJ jurisdiction for consular disputes because of the ruling of the ICJ in the Case Concerning Avena and Other Mexican Nationals (Mexico v. U.S.A.) (2008).

Undoubtedly Marshall Islands had a painful nuclear history. After the Second World War, when it was designated as a Trust Territory by the United Nations, it was the testing ground of nuclear weapons by the United States throughout the 1940s and 1950s.

Having endured the pain and wrath of nuclear power, Marshall Islands brought these suits alleging breaches of the customary international law and obligations erga omnes (India not being a party to NPT, breach of Article VI could not be alleged). It alleged that India has not fulfilled its obligation under customary international law to pursue in good faith negotiations to cease the nuclear arms race at an early date, and instead was taking action to improve and expand its nuclear forces and to maintain them for the indefinite future.

But in a seven-to-seven split won by the President's casting vote, the ICJ opined that it could not definitively conclude “whether the threat or use of nuclear weapons would be lawful or unlawful in an extreme circumstance of self-defense, in which the very survival of a State would be at stake.”

From inception the United Nations has been seriously concerned about nuclear disarmament. Both the General Assembly and the Security Council have always worked towards towards nuclear disarmament. The very first resolution which was unanimously adopted on 24th June 1946 by the General Assembly established a consensus to deal with the problems faced by the discovery of 'Atomic Energy'.

In fact, way back in 1952 the General Assembly created the first UN Disarmament Commission under the Security Council. Subsequently the Committee on Disarmament was formed which was then redesignated as Conference on Disarmament. At the multilateral level, the Treaty on the Non-Proliferation of Nuclear Weapons, commonly known as NPT, came into force in 1970.

“Each of the Parties to the Treaty undertakes to pursue negotiations in good faith on effective measures relating to cessation of the nuclear arms race at an early date and to nuclear disarmament, and on a treaty on general and complete disarmament under strict and effective international control.”

In the 1990s, the Comprehensive Test Ban Treaty (CTBT), which is a prohibition on explosive testing of nuclear weapons, was negotiated by the states but it's yet to come into force. It categorically declares the parties' intention to 'take further effective measures towards nuclear disarmament'.

The ICJ dismissed the Case Regarding Obligations Concerning Negotiations Relating to Cessation of the Nuclear Arms Race and to Nuclear Disarmament on the preliminary objection that Marshall Islands failed to show that there was, at the time of the filing of the Application, a legal dispute between the Parties. Under Article 36, paragraph 2, of the Statute, the Court has jurisdiction in all “legal disputes” that may arise between States parties to the Statute having made a declaration in accordance with that provision.

The majority reasoned that since Marshall Islands did not refer to any bilateral diplomatic exchanges or official communications between it and India, nor to any bilateral consultations or negotiations that had taken place, concerning the alleged breach of India's obligations, India was not made aware of its position and hence the suit could not proceed.

In so deciding the ICJ referred to the new jurisprudence (post 2010) asking for this heightened requirement of 'proof of existence of legal disputes' as reflected in the cases such as Alleged Violations of Sovereign Rights and Maritime Spaces in the Caribbean Sea (Nicaragua v. Colombia), Preliminary Objections (2016), Questions relating to the Obligation to Prosecute or Extradite (Belgium v. Senegal) (2012) and  Application of the International Convention on the Elimination of All Forms of Racial Discrimination (Georgia v. Russian Federation), Preliminary Objections (2011).

But there were scathing dissenting voices too. Judge Antônio Augusto Cançado Trindade remarked that this view clearly contradicted the earlier case-law of the ICJ (and its predecessor court PCIJ) which had taken a much less formal approach to the establishment of the existence of a dispute.

The dissenting judges referred to plethora of cases such as Mavrommatis Palestine Concessions (PCIJ, 1924), Case of Certain German Interests in Polish Upper Silesia (PCIJ, 1925), Factory at Chorzów (Germany v Poland) (PCIJ, 1927), East Timor (Portugal v. Australia) (1995), Application of the Convention on the Prevention and Punishment of the Crime of Genocide (Bosnia and Herzegovina v. Yugoslavia) (1996) and Case of Certain Property (Liechtenstein v. Germany) (2005).

Judge Trindade lamenting on the Court's refusal to hear the merits observed that nuclear weapons are intrinsically indiscriminate, incontrollable and are prohibited by International Humanitarian Law (Articles 35, 48 and 51 of the Additional Protocol I of 1977 to the 1949 Geneva Conventions on International Humanitarian Law) and are even inhuman as weapons of mass destruction.

Many regional human rights tribunals such as the European Court of Human Rights (ECtHR), the African Commission of Human and Peoples' Rights (AfComHPR) and the Inter-American  Courts of Human Rights (IACtHR) are already functional and also taking into account the principles and norms of International Humanitarian Law.

But the ICJ, at least while deliberating on nuclear issues, has avoided any determination on its legality by pointing towards the absence of any specific customary nor conventional international law obligation. One of the reasons may be the lack of a solid enforcement mechanism and it is only the freely consenting states which abide by the Court's judgments.

The ICJ may have been wary that any judgment against India, Pakistan or the United Kingdom might have tempted the state to walk out of the compulsory jurisdiction further weakening the World Court's shrinking mandate. Even in the Nuclear Test Cases (Australia v. France; New Zealand v. France) (1974) where Australia and New Zealand bought cases against France as France was conducting nuclear tests in the South Pacific, the cases were taken off the Court's list without a decision being given on the merits as France unilaterally announced that it would not conduct any further tests.

On similar lines the present judgment only reinforces the growing concern that the World Court is reluctant to hear and adjudicate any case concerning contentious nuclear issues.

The writers are Mumbai-based advocates and legal consultants. [IDN-InDepthNews – 26 November 2016]