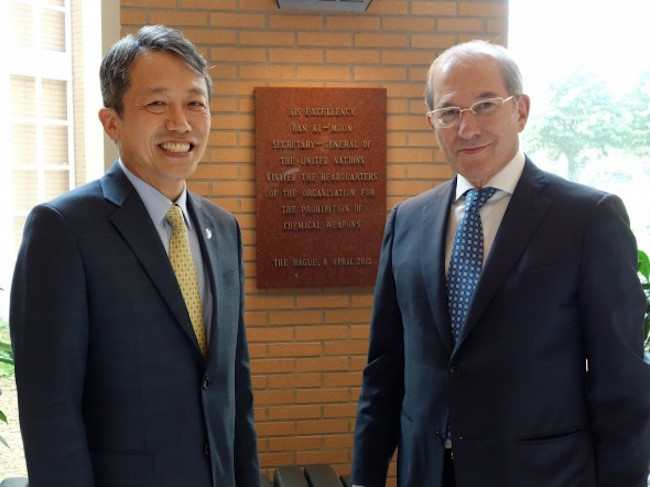 Kim Won-soo is United Nations High Representative for Disarmament Affairs. This is a slightly abridged version of his Opening Remarks at the 26th United Nations Conference on Disarmament Issues in Nagasaki, Japan on December 12, 2016.

NAGASAKI (IDN-INPS) - This year marks the sixtieth anniversary of Japan’s membership of the United Nations. For six decades, Japan has been one of the strongest contributors to the multilateral system and to disarmament.

For this, the United Nations thanks you.

This year also marks the seventieth anniversary of the first ever General Assembly resolution. As you know, it called for the elimination of all weapons of mass destruction, including nuclear weapons – the weapon to pose an existential danger to humanity.

Seventy years later we have yet to achieve that goal. Worse, our efforts to eliminate nuclear weapons have faltered.

There remain some fifteen thousand nuclear weapons in the world today. While this represents a dramatic reduction from the heights of the Cold War, even one nuclear weapon is too many.

Instead of new plans for reductions, we see expensive modernisation programmes. The arsenals of some nuclear possessor states appear to be expanding, not contracting.

One State continues to violate the norm against nuclear explosive testing, endangering regional and global security, and undermining the global non-proliferation regime.

The UN disarmament machinery is locked in stalemate – a malaise best illustrated by the Conference on Disarmament’s inability to even reach agreement on a programme of work.

No new multilateral disarmament treaty has been negotiated since the Comprehensive Nuclear-Test-Ban Treaty twenty years ago. Even the CTBT still has not entered into force.

The historic arms control accords of the late 1980s are endangered by claims and counter- claims of non-compliance. We have seen a rise in global tensions and a return to dangerous Cold War-era rhetoric.

These threats and risks are exacerbated by spiralling military expenditures, enhanced risks of proliferation, including by non-state actors, potential catastrophic terrorist attacks and new technologies that, if misused or abused, could cause mass destruction and disruption.

We all share the goal of a world free of nuclear weapons. But recent developments have seen a sharp divergence in how to achieve that goal.

The debate regarding the proposed ‘prohibition treaty’ has raised fundamental questions. First, how will a prohibition treaty help induce nuclear possessors to move toward elimination? Second, why has it proven more difficult to delegitimize nuclear weapons compared to all other weapons of mass destruction?

Throughout his tenure, Secretary-General Ban Ki-moon has been a principled advocate for a world free of all weapons of mass destruction. Three weeks ago at New York University he renewed his five-point action agenda, making a case that disarmament needs a “fresh start”.

To make that fresh start, all countries need to find a way to catalyse inclusive engagement ona path forward. We must devise a way to reconcile differences and find common ground.

I count on our host nation, Japan, to continue its historic role as a bridge builder between nations. Japan is unique – it is the only nation to have nuclear weapons used against it. Japan can reach out to all States to narrow the gulf in positions.

In the meantime, there are immediate actions that States can take to make sure nuclear disarmament does not go backwards.

First, all States should pursue policies that are fully compatible with the objective of achieving a world without nuclear weapons. This includes full implementation of treaty- based obligations and the pursuit of new measures.

Second, the nuclear weapon-States, in accordance with their legal obligations, have a responsibility to lead the way.

There is an urgent need for dialogue. This year marks the 20th Anniversary of the historic Reykjavik summit between the United States and the former Soviet Union. Reykjavik showed that dialogue can lead to breakthroughs. In this spirit of grand compromise, the United States and the Russian Federation, holders of some ninety-five per cent of all nuclear weapons, should re-engage in a dialogue on how to return to the path of arms reduction.

Third, States should remember that progress in disarmament strengthens our collective security. As Secretary-General Ban said in Reykjavik last October, “Some may claim that security conditions today are not ripe for the pursuit of further nuclear disarmament. I say this view has it completely backwards. The pursuit of arms control and disarmament is precisely how we can break the tension and reduce conflicts.”

2016 was a year of anniversaries. I hope that Member States will make 2017 a year of action – one that takes giant strides down the path to a world free of nuclear weapons; to a safer, more secure and better world for all. [IDN-InDepthNews – 21 December 2016]