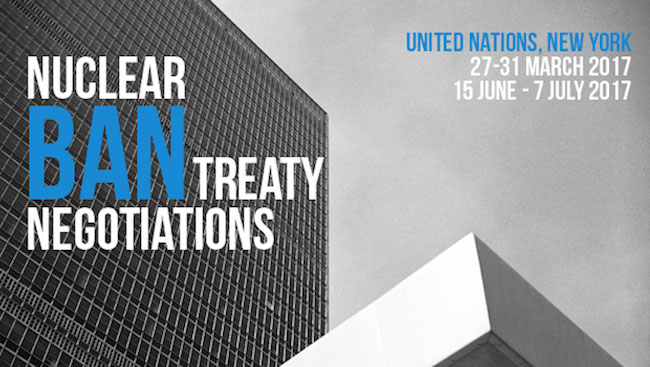 NEW YORK (IDN) – Civil society disarmament groups threw in their weight for ushering in a world free of the atomic arsenal of mass destruction as more than 130 nations gathered on March 27 at the United Nations headquarters in New York to participate in the first round of five-day negotiations aimed at achieving a treaty banning nuclear weapons in international law. The second round is scheduled for June 15 to July 7, 2017.

While the majority of the world's governments gathered in the room, President Donald Trump's UN envoy, Nikki Haley, held a protest together with two of the five permanent (P5) veto-wielding members of the Security Council – the UK, France – and a number of Eastern European allies who feel threatened by Russia.

Beatrice Fihn, the executive director of the International Campaign to Abolish Nuclear Weapons (ICAN) said the very unusual protest by Ambassador Haley and others “demonstrates how worried they are about the real impact of the nuclear ban treaty”. Finh, who heads an organization which is a strong supporter of the negotiations, said a treaty would “make it clear that the world has moved beyond these morally unacceptable weapons of the past”.

Rick Wayman, Director of Programs at Nuclear Age Peace Foundation (NAPF) commented early March 27: "In an epic role reversal, this morning we saw U.S. Ambassador Nikki Haley protesting outside the UN General Assembly Hall while the majority of the world's nations, supported by NGOs from around the world, began negotiations on a treaty banning nuclear weapons."

Stressing the importance of the talks at the 'United Nations Conference to Negotiate a Legally Binding Instrument to Prohibit Nuclear Weapons, Leading Towards their Total Elimination', NAPF President David Krieger declared: “This is a breakthrough day and week in the Nuclear Age. For the first time ever, nations will be negotiating to ban nuclear weapons – weapons capable of destroying civilization and complex life.”

Another leading disarmament group, the UNFOLD ZERO recalled that in December 2016, the UN General Assembly had decided – by a vote of 113 in favour, 35 against and 13 abstaining – to commence negotiations on a treaty to prohibit nuclear weapons, regardless of whether or not the nuclear-armed and allied states join such a treaty.

Explaining the impact of historic talks at the UN, the group said: "Even if no nuclear-armed or allied States join the nuclear prohibition treaty, it could impact on their policies and practices. The treaty could, for example, affirm that the use and threat of use of nuclear weapons are already illegal under existing international law, including international humanitarian law and the UN Charter. This would increase the legal and political pressure on nuclear armed and allied States to phase out nuclear deterrence and join subsequent negotiations for the elimination of nuclear weapons."

The treaty could also prohibit the financing of nuclear weapons, including by banks and public funds, in the States signing the treaty. This follows a similar practice of governments divesting from corporations making landmines and cluster munitions following the adoption of treaties prohibiting these weapons, added the UNFOLD ZERO.

Such action, the group added, could hit at the heart of one of the most powerful drivers of the nuclear arms race – the nuclear weapons corporations which are making billions of dollars from producing the weapons, and have a vested interest in keeping the arms race going.

Together with Basel Peace Office and Parliamentarians for Nuclear Non-proliferation and Disarmament (PNND), UNFOLD ZERO submitted a working paper to the UN negotiating conference calling for the treaty to include such a prohibition, providing details about how such a prohibition could work, and giving examples of countries that have already divested their public funds from nuclear weapons corporations.

From January to March 2017, UNFOLD ZERO and PNND organized a series of consultation meetings with disarmament experts and civil society representatives on the current nuclear disarmament climate, how to build success in the ban treaty negotiations and the 2018 UN High Level Conference, and how to build cooperation between civil society and parliamentarians. Consultation events were held in Berlin, Geneva, London, New York, Vienna, and Washington DC.

UNFOLD ZERO and PNND have forwarded the outcomes of these events to the UN negotiations building support from parliaments and in inter-parliamentary forums including the Inter-Parliamentary Union (IPU) and the Parliamentary Assembly of the Organization for Security and Cooperation in Europe (OSCE).

A series of informal discussions amongst governments, disarmament experts and civil society organizations was held at the Palais de Nations in Geneva in March, prior to the start of the UN negotiations in New York.

The discussions, which were organized by the Geneva Centre for Security Policy and the Geneva Disarmament Platform, focused on a number of critical issues for the negotiations, including provisions on cooperation and relations with nuclear-armed states outside the treaty, withdrawal provisions and provisions for nuclear-armed States to accede to the treaty.

UNFOLD ZERO participated in these discussions along with its partners Basel Peace Office, PNND and the International Association of Lawyers Against Nuclear Arms.

With the risk of nuclear detonation higher than at any time since the end of the Cold War, a legal treaty is an urgent priority for all countries that believe in a future free of nuclear weapons, NAPF said in a statement.

A treaty emerging from these negotiations until March 31 and the second round from June 15 to July 7, according to NAPF, should: legally bind parties from using, possessing and developing nuclear weapons, and assisting others in those activities; work in concert with the existing regime of nonproliferation and disarmament agreements; and strengthen the norm against indiscriminate weapons and provide countries a method to meet disarmament obligations.

Banning nuclear weapons will be the next step in a decades-long effort to ensure that the laws of war are followed and the indiscriminate destruction and unnecessary suffering caused by nuclear weapons is prevented forever. [IDN-InDepthNews – 28 March 2017]