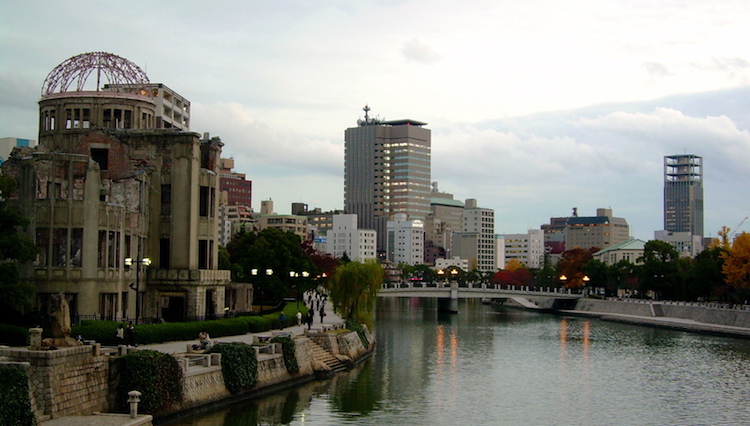 The statement emerging from Citizens Symposium some 7,000 miles away from New York on April 10 and addressed to the G7 governments - Britain, Canada, France, Germany, Italy, Japan and the United States – said: “Today, the over 15,000 nuclear warheads that exist on the planet continue to threaten the existence of humanity. Nuclear proliferation continues and the vicious cycle involving poverty, inequality, environmental degradation and violence is bringing about various kinds of humanitarian crises across the world.”

The statement urged the G7 to “reflect the lessons learned seventy years ago by the use of nuclear weapons on the cities of both Hiroshima and Nagasaki: the unprecedented and inhumane experience of the atomic bombing has taught us that ‘nuclear weapons and humanity cannot coexist’.”

These sentiments and views were reflected in several speeches during the general debate at the UN Disarmament Commission (UNDC). The Commission Chairman Vanuatu’s Odo Tevi stressed that disagreements and rivalries persisted between States, while the increasing threats of terrorism and cyber attacks presented additional global challenges.

The multilateral disarmament agenda showed signs of decay and decline, as States were retreating from negotiations, he added. The 2015 Non-Proliferation Treaty Review had concluded without agreement on a substantive outcome document. Against that backdrop, the Disarmament Commission, with its universal membership, had a critical role to play in 2016 in renewing trust between States.

Kim Won-Soo, Under Secretary-General and High Representative for Disarmament Affairs, said the Commission was entering the middle phase of its current cycle during a time of deepening paralysis and divisions within multilateral disarmament bodies.

Drawing attention to the inability to bring the Comprehensive Nuclear Test Ban Treaty into force and the lack of negotiations during the Conference on Disarmament, he noted that those disappointments were well known to all, from the 2015 Review Conference of the Parties to the Treaty on the Non-Proliferation of Nuclear Weapons (NPT).

Much needed to be done with regard to nuclear disarmament and non-proliferation, he said. Over the past 11 months, views had been polarized and entrenched. Despite that, work on the elaboration of effective legal measures would resume at the UN Conference on Disarmament in Geneva in May, he said, adding that the Disarmament Commission continued to maintain its unique and distinct role. In that regard, he encouraged Member States to make use of the Commission to engage in constructive dialogue geared towards realizing a nuclear-weapon-free world.

This is what Ambassador Kairat Abdrakhmanov, Kazakhstan’s Permanent Representative to the UN, aimed at, when he emphasized the need to break the stalemate of UNDC since 1999 and revitalize the effectiveness of the disarmament machinery. He noted with deep regret that entities of the disarmament machinery had not executed their mandates since the last two decades and expressed the hope that such a situation would soon change by way of various bold and innovative measures to achieve the desired objectives for a safe and secure world.

Considering that the threat of use of nuclear weapons by state and non-state actors remains the main challenge that humanity faces today, every opportunity must be used to achieve a world free of nuclear weapons, recognizing the key role of the International Atomic Energy Agency (IAEA) as the main international structure responsible for the elaboration of goals and principles.

IAEA should be commended for uniting international efforts in ensuring nuclear security. However, the Nuclear Security Summits contribute significantly – and support the IAEA – to accomplish this common goal. With this in view, Kazakh President Nursultan Nazarbayev had participated in all the four summits. He was confident that implementing the recommendations adopted at the Summits in Washington, Seoul, The Hague, and on March 31-April 1 in Washington would greatly increase nuclear security worldwide.

Abdrakhmanov said, one of the key statements of Kazakh leadership at the Fourth Summit had been the position that, despite the considerable progress made as an outcome of the summits, the objectives set up in the framework of this initiative, generally speaking, are not fully implemented.

“It is, therefore, necessary to consider the continuation of these summits to further reduce nuclear security threats. Hence, Kazakhstan presented . . . at the (Washington) summit a fundamentally new document titled, Manifesto: The World. The 21st Century, which expresses the momentous stand on the issues of war and peace, particularly above all, the threat of a nuclear apocalypse in the event of failure of the international community to promote and advance a total ban on nuclear weapons.

Kazakhstan therefore tabled resolution 70/57 on the Universal Declaration for the Achievement of a Nuclear-Weapon-Free World, which was supported by the majority of UN Member States and adopted on December 8, 2015. It outlines the basic principles and objectives of nuclear disarmament, and urges that bold steps be taken, including the adoption of a legally binding international instrument to prohibit and destroy all nuclear weapons as well as to establish a Global Anti-Nuclear Movement aimed at nuclear disarmament.

Kazakhstan has supported the establishment of the Open-ended Working Group (OEWG) to advance the process of multilateral negotiations on nuclear disarmament. “To us, this entity is not an alternative to the CD and the UNDC. However, the OEWG has the absolute majority of supporters, and its potential cannot be ignored. We call on the nuclear weapons possessing states to participate in this dialogue,” Ambassador Abdrakhmanov said.

Kazakhstan’s views have been supported by several delegates during the ongoing UNDC discussions.

Associating himself with the Non-Aligned Movement, Venkatesh Varma, India’s Permanent Representative to the UN in Geneva said, the Commission’s current difficulties were due to “the lack of political will of States” to invest in multilateral outcomes. At the fourth Nuclear Security Summit in Washington, D.C., India’s Prime Minister Narendra Modi had underlined his country’s commitment to disarmament.

Indeed, nuclear security would continue to be a priority for India, which was also committed to global non-discriminatory disarmament and to complete disarmament in a time-bound manner, Varma said.

Stressing the need to close gaps in negotiations leading to that goal, he anticipated the start of discussions in the Conference on Disarmament on a disarmament convention. In that regard, he supported global efforts, including creating an agreement on a step-by-step process towards the complete elimination of nuclear weapons and Kazakhstan’s proposal on a universal declaration on a nuclear-weapon-free world.

Turning to confidence-building measures, he said a step-by-step process should unfold at a pace comfortable to all parties.  While India’s priority was the Commission’s agenda item on nuclear disarmament, it would not stand in the way of a possible third item to help the international community respond to emerging threats.

Ambassador Abdrakhmanov also stressed the importance of Nuclear-Weapon-Free Zones (NWFZs) that meanwhile cover the entire southern hemisphere, and 116 Member States of such zones represent the majority of UN Member States.

“We support expanding such zones in the future, and particularly the creation of a Middle East Zone Free of the Weapons of Mass Destruction,” he said, adding: “We support the proposal to hold annual meetings of representatives of all the NWFZs in New York. . . the Protocol to the Semipalatinsk Treaty, signed by representatives of the ‘Nuclear 5’ countries in 2014, has already been ratified by the UK, China, Russia and France, and we look forward to the early completion of this work by the U.S.,” the Kazakh Permanent Representative to the UN added. [IDN-InDepthNews – 11 April 2016]