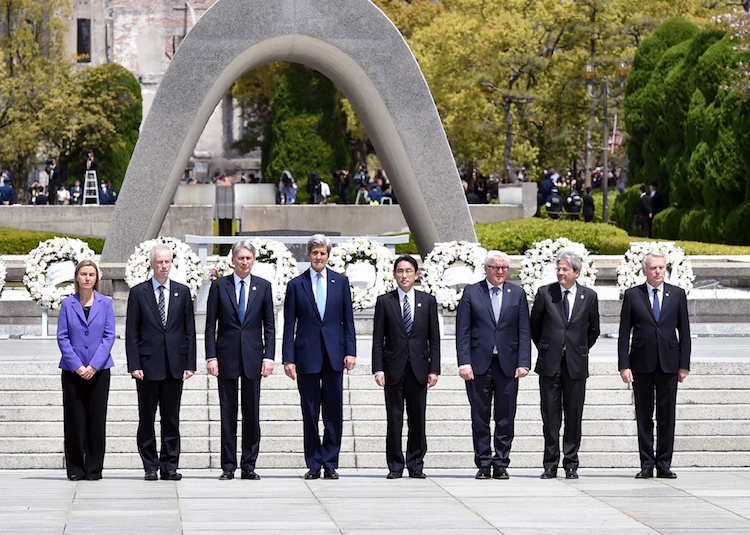 HIROSHIMA (IDN) - When the Foreign Ministers of G7 countries -- Canada, France, Germany, Italy, Japan, UK and the United States – adopted the ‘Hiroshima Declaration’ at the end of a two-day meeting on April 11, they failed to make any concrete commitments for the total elimination of nuclear weapons worldwide. [P03] JAPANESE TEXT VERSION PDF

The Declaration was replete with pious intentions and time-worn platitudes of the dangers of weapons mass destruction (WMDs), but fell short of a world without nuclear weapons.

Tariq Rauf, Director of the Disarmament, Arms Control and Non-Proliferation Programme at the Stockholm International Peace Research Institute (SIPRI), told IDN the Declaration is a major disappointment and a frittering away of a solemn opportunity – the 71st year following the nuclear bombing of Hiroshima and Nagasaki – to commit to nuclear disarmament and elimination of nuclear weapons.

It is unfortunate that the G-7 Foreign Ministers termed their “commitment to seeking a safer world for all and to creating the conditions for a world without nuclear weapons in a way that promotes international stability”.

But it related this to the turmoil in Syria and Ukraine and the nuclear programme of North Korea, he pointed out.

In the fight against the Dae’sh (also known as ISIS) and addressing the instability in Ukraine, nuclear weapons are completely irrelevant, he argued.

“And, threatening North Korea with force or nuclear weapons is counter-productive and cannot resolve the security situation in the Korean peninsula,” said Rauf, formerly Head of Nuclear Verification and Policy Coordination at the International Atomic Energy Agency (IAEA) in Vienna.

John Steinbach, one of the founding members of the Hiroshima/Nagasaki Peace Committee of the National Capital Area, was equally skeptical.

He said: "It is reported that Secretary Kerry called his visit (to Hiroshima) 'gut-wrenching' and wrote: 'It is a stark, harsh, compelling reminder not only of our obligation to end the threat of nuclear weapons, but to re-dedicate all our effort to avoid war itself.”

"We certainly agree with the sentiments – and we wish current U.S. policy reflected those priorities,” said Steinbach.

But the actual context is that the U.S. is engaged in an unprecedented nuclear build up, he added. “It is spending $1 trillion dollars over the next 30 years to 'modernize' its nuclear weapons arsenal. This includes creating smaller, 'more usable' weapons.”

The Obama administration, he pointed out, has clearly turned its back on its stated goal of abolishing nuclear weapons.

"Moreover, NATO is expanding, posing the threat of a direct confrontation with Russia. The U.S. has continued its wars in the Mideast. Climate change is resulting in instability and resource wars may well lead to more conflicts.”

And the 'Doomsday Clock' of the Bulletin of the Atomic Scientists is still set to 3 minutes, he noted.

When John Kerry visited the Hiroshima Peace Park on April 11, he was the first U.S. Secretary of State and the highest ranking American diplomat to visit a city devastated by two U.S. atomic bombs 71 years ago.

Falling short of admitting U.S. guilt for perpetrating a war crime of biblical proportion, Kerry dramatised his visit describing it as 'gut-wrenching.'

Addressing a news conference in Hiroshima, he told reporters: "It is a reminder of the depth of the obligation every one of us in public life carries ... to create and pursue a world free from nuclear weapons."

But he left one question lingering: Will U.S. president Barack Obama, who in his April 2009 speech in Prague called for a world without nuclear weapons, make a historic visit to Hiroshima when he arrives in Japan for a G7 summit of world leaders on May 26-27?

Kerry side-stepped the question when he told reporters that Obama also wanted to travel to the city in southern Japan but he did not know whether the U.S. president’s complex schedule would allow him to do so when he visits the country for the summit meeting.

“Whether or not he can come as president, I don’t know," said Kerry.

If Obama does visit Hiroshima, he will face the stark realities of the type of destruction that can be caused to humanity in a future war with nuclear weapons.

In a statement released here, Japanese Foreign Minister Fumio Kishida said: "I think this first-ever visit by G7 foreign ministers to the peace memorial park is a historic first step towards reviving momentum toward a world without nuclear weapons."

A former U.S. President Jimmy Carter visited the memorial in 1984, but four years after he left office, followed by a 2008 visit by Nancy Pelosi, then Speaker of the U.S. House of Representatives, according to the New York Times.

“But no serving (U.S.) administration official of cabinet rank or higher has visited“ (the memorial), the Times reported.

The Foreign Ministers ended their two-day meeting on April 11 by adopting the ‘Hiroshima Declaration’ where the G-7 countries “share the deep desire of the people of Hiroshima and Nagasaki that nuclear weapons never be used again”.

The statement not only emphasized the importance of the Nuclear Non-ProliferationTreaty (NPT) but also called for a ban on nuclear test explosions, and urged all states to sign and ratify the Comprehensive Nuclear-Test Ban Treaty (CTBT) without delay and conditions.

At the May summit, the G7 will be represented by world leaders from the seven industrialized countries, plus the 28-member European Union (EU). The summit will take place in Kashiko Island, Shima, Mie Prefecture, Japan.

The Hiroshima Declaration emphasized the importance of the G7 meeting in Hiroshima 71 years after World War II, which unleashed unprecedented horror upon the world.

“The people of Hiroshima and Nagasaki experienced immense devastation and human suffering as a consequence of the atomic bombings and have rebuilt their cities so impressively. In this historic meeting, we reaffirm our commitment to seeking a safer world for all and to creating the conditions for a world without nuclear weapons in a way that promotes international stability. This task is made more complex by the deteriorating security environment in a number of regions, such as Syria and Ukraine, and, in particular by North Korea’s repeated provocations.”

SIPRI’s Rauf told IDN although the G-7 Foreign Ministers expressed support for the nuclear Non-Proliferation Treaty (NPT) and urged India, Israel and Pakistan to join the NPT, they downplayed the legally binding obligation of the nuclear-weapon States to eliminate their nuclear weapon arsenals.

This is not surprising, he said, since the G-7 Foreign Ministers represent three nuclear-weapon States – France, UK and USA – and their allies (Canada, Germany, Italy and Japan) all nestling under a security system firmly anchored in nuclear weapons.

He also said it would have been appropriate for the G-7 Foreign Ministers to have recognized the dire humanitarian and environmental consequences of nuclear weapons and pledged to seek their total elimination through multilateral negotiations at the Conference on Disarmament in Geneva.

And, also a pledge from France, UK and the U.S. to change their opposition to the UN General Assembly-mandated Open-ended Working Group on Taking Forward Multilateral Negotiations on Disarmament (that will be meeting in its second session in May in Geneva), and announce they would take part in these discussions to find ways of advancing the nuclear disarmament agenda.

He said such opposition by the nuclear-weapon States to the wishes of the vast majority of UN Member States to discuss possible ways and paths to nuclear disarmament shows the true colours of the nuclear-armed States.

At the end of March, some 52 world leaders met in Washington at the Nuclear Security Summit (NSS) to discuss ways of strengthening the security of nuclear materials in civilian use, but some 83% of the nearly 1,800 metric tons of the world’s nuclear weapon-usable materials – highly enriched uranium and plutonium – were off the table as were the nearly 15,000 nuclear weapons.

“G-7 Foreign Ministers should get serious, along with the G-7 leaders, when they meet at their 42nd summit meeting in Japan on 26-27 May 2016 and commit themselves to: irreversible nuclear disarmament; join with the other nuclear-armed States to reduce and eliminate nuclear weapons and nuclear weapon-usable materials; and work to bring the CTBT, prohibiting all nuclear test explosions, signed in 1996, into effect before the end of this year. “

“The challenges are big, but time is short. G-7 leaders need to stand up to their responsibilities,” declared Rauf. [IDN-InDepthNews – 12 April 2016]

Photo: The first visit to the Hiroshima Peace Memorial Park by all the G7 Foreign Ministers. Credit: Ministry of Foreign Affairs, Japan.