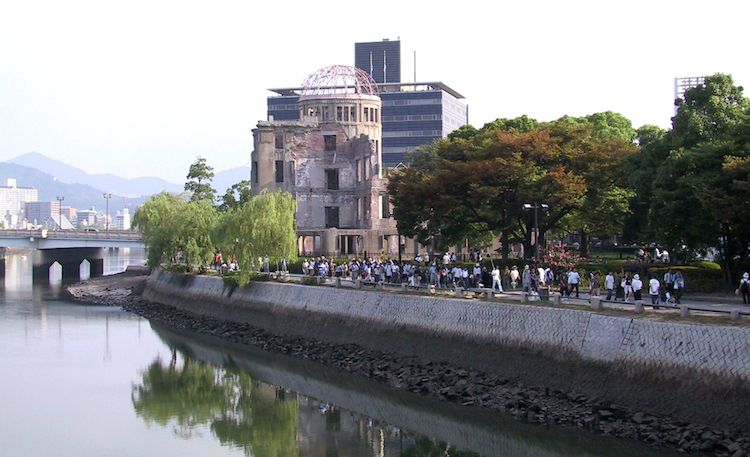 NEW YORK (IDN) - When President Barack Obama made a historic visit on May 27 to Hiroshima – where a U.S. nuclear attack on Japan in 1945 resulted in over 200,000 casualties* – he offered no apologies for the human devastation nor provided any justification for the first and only use of nuclear weapons ever. [P08] ARABIC | JAPANESE TEXT VERSION PDF | NORWEGIAN | SPANISH

But he reiterated his call for a world without nuclear weapons – even as the U.S. continues to modernize its nuclear programme at a cost of over $1 trillion dollars proving there is still a widening gap between pledges and deliveries.

Despite all the good intentions, are we any closer, are we far removed, from a future nuclear war that could annihilate millions?

In a projection into the future, the Wall Street Journal on May 19 posed a more relevant question: “Would we drop the bomb again?”

Dr Scott D. Sagan, professor of political science and senior fellow at the Centre for International Security and Cooperation at Stanford University and Dr Benjamin A. Valentino, associate professor of government at Dartmouth College, point out that two surveys, one in 1945 and the other in July 2015, suggest that Americans are open to nuclear strikes in the future.

A Roper poll, conducted in September 1945, a month after the bombing of Hiroshima and Nagasaki, indicated that 53 percent of respondents nation-wide agreed the U.S. “should have used two bombs on two cities, just as we did.”

A second poll conducted in July 2015, to coincide with the 70th anniversary of the bombings, indicated only 28 percent supported the U.S. nuclear attacks while 32 percent “indicated support for a nuclear demonstration strike.”

The two academics, who authored the article, conclude: “Our surveys can’t say how future presidents and their top advisers would weigh their options. But they do reveal something unsettling about the instincts of the U.S. public: When provoked, we don’t seem to consider the use of nuclear weapons a taboo, and our commitment to the immunity of civilians from deliberate attack on wartime, even with vast casualties, is shallow.”

Today, as in 1945, “the U.S. public is unlikely to hold back a president who might consider using nuclear weapons in the crucible of war.”

Just ahead of Obama’s visit, more than 70 prominent scholars and activists, including Oliver Stone, Noam Chomsky and Daniel Ellsberg, signed a letter urging the U.S. President to announce concrete steps towards nuclear disarmament.

Joseph Gerson, of the Quaker peace organization American Friends Service Committee, said: “The U.S. is on track to spend a trillion dollars over thirty years on the next generation of nuclear weapons and delivery systems.

He said President Obama should cancel this spending, revitalize disarmament diplomacy by announcing a reduction of the U.S. nuclear arsenal, and challenge Russian President Vladimir Putin to join in beginning negotiations to create the nuclear weapons-free world promised in Prague and required by the Nuclear Non-Proliferation Treaty.”

In a letter addressed to Obama, the 70 activists said the U.S atomic bombings of Hiroshima and Nagasaki in August 1945 indiscriminately incinerated tens of thousands of children, women and men in an instant.

By the end of 1945 more than 210,000 people – mainly civilians, were dead. Over 90% of the doctors and nurses in Hiroshima were killed or injured by the bomb, the letter said.

The surviving hibakusha, their children and grandchildren continue to suffer from physical, psychological and sociological effects of the bombings. Health effects caused by genetic damage to future generations are still unknown.

Today, the letter said, more than 15,000 nuclear weapons, most of them orders of magnitude more powerful than the Hiroshima and Nagasaki bombs, 94% held by the U.S. and Russia, continue to pose an intolerable threat to humanity.

“Yet no disarmament negotiations are underway or planned.”

Last year The Bulletin of the Atomic Scientists moved the hands of its Doomsday Clock to three minutes to midnight citing the “extraordinary and undeniable threats to the continued existence of humanity” posed by “unchecked climate change, global nuclear weapons modernizations, and outsized nuclear arsenals,” and the failure of world leaders to act.

Seven years ago in Prague, the letter said, “you raised the hopes of people around the world when you declared: “[A]s the only nuclear power to have used a nuclear weapon, the United States has a moral responsibility to act…. So today, I state clearly and with conviction America’s commitment to seek the peace and security of a world without nuclear weapons.”

“But to the contrary, under your leadership, the U.S. is planning to spend one trillion dollars over the next three decades to modernize every nuclear warhead type in its arsenal, and to upgrade and replace their delivery systems – submarines, land-based missiles, and bombers – for the foreseeable future.”

“As the first sitting U.S. President to visit Hiroshima you have an historic opportunity to demonstrate the moral responsibility you claimed in Prague.”

To this end: “We call on you, as a demonstration of good faith and a concrete interim step, to dramatically reduce the U.S. nuclear arsenal and urge Russia to do the same, as use of even a fraction of existing arsenals could cause nuclear winter, resulting in severe climate change leading to global famine.”

“We call on you to cancel the $1 trillion, 30-year programme to upgrade the U.S. nuclear arsenal and overhaul the nuclear weapons complex, and to redirect those funds to meet human needs.” [IDN-InDepthNews – 31 May 2016]

* Within the first two to four months of the bombings, the acute effects of the atomic bombings killed 90,000–146,000 people in Hiroshima and 39,000–80,000 in Nagasaki; roughly half of the deaths in each city occurred on the first day, according to Wikipedia updated on 6 June 2016.