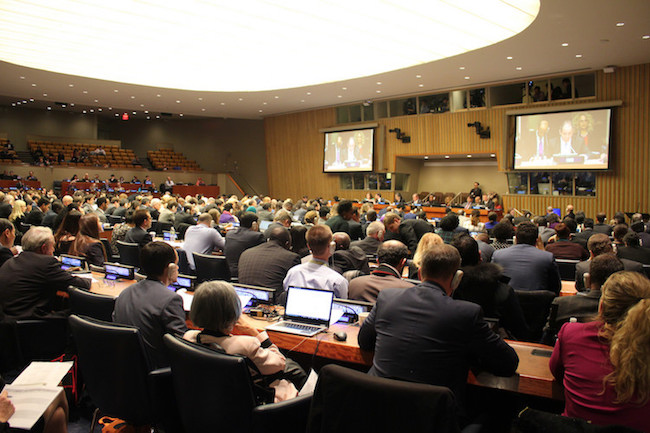 SYDNEY (IDN) - As the curtain falls on 2016, the year that marked the fifth anniversary of Fukushima and the 30th anniversary of Chernobyl nuclear disasters, sending a sombre reminder of the devastating humanitarian and environmental consequences of these weapons of mass destruction, the resolve to free the world of nuclear weapons is stronger than ever before.

Australia, once a champion of nuclear disarmament, chose to oppose the Resolution even as the continent country’s nearest 26 neighbours in the Asia-Pacific voted in favour alongside African, Latin American and Caribbean countries.

International Campaign to Abolish Nuclear Weapons (ICAN) Australia’s Campaign Director, Tim Wright says, “If Australia continues to oppose this long-overdue treaty, it risks alienating other nations in the region. It is deeply regrettable that Australia, instead of standing up for what is morally right and necessary, chose to side with the small number of nuclear-armed nations and others that claim nuclear weapons are legitimate."

He adds: "Australia's attempt to derail the UN working group on nuclear disarmament was an extraordinary move, and one that backfired spectacularly. It resulted in a clearer recommendation and strengthened the resolve of other nations to start negotiations in 2017 on a treaty outlawing nuclear weapons.”

The Resolution follows three intergovernmental conferences, examining the humanitarian impact of nuclear weapons, which were held in Norway, Mexico and Austria during 2013 and 2014. These conferences paved the way for non-nuclear countries to play a more assertive role in disarmament.

Calling on Australia to immediately end its claimed reliance on U.S. nuclear weapons, Wright told IDN, “This dangerous policy of extended nuclear deterrence undermines disarmament and promotes proliferation. It sends a message to other nations that these weapons of mass destruction are legitimate, necessary and useful. There can be no justification whatsoever for this policy. No other country in our immediate region claims protection from nuclear weapons.”

Nuclear-armed states and countries that subscribe to the United States’ extended nuclear deterrence for security, such as Australia, Japan and South Korea, had opposed the Resolution.

It is worth noting that New Zealand supported the Resolution, which is consistent with its last over three decades of social and legal history on the issue of nuclear arms. Wright says, “Australia, once a supporter of nuclear disarmament, has in recent years completely abandoned principle on this issue, seizing every opportunity to defend the continued possession and potential use of these worst weapons of mass destruction.”

New Zealand, Indonesia, Malaysia and Thailand are amongst countries in the region that are likely to play a key role at the negotiating conferences scheduled for March and June 2017 in New York.

Former Chair of the New Zealand Parliamentarians for Nuclear Non-Proliferation and Disarmament (PNND), Maryan Street told IDN, “It is shocking that Australia opposed Resolution L41. There's no rational explanation for it except to state the obvious and that is that their allegiance to the United States overtook all other considerations. Australia has never been in the forefront of the anti-nuclear movement and so it should come as no surprise that it voted the way it did. With a conservative Liberal government, there is clearly no appetite for courage on this issue.”

Out of the 34 Asia-Pacific countries, which voted on the issue, only four voted against it, namely Australia, Japan, the Federated States of Micronesia and South Korea, and four others – China, India, Pakistan and Vanuatu abstained.

“To be so out of step with your nearest neighbours on an issue of such strategic and potentially cataclysmic importance seems to be irresponsible. Australia needs to use its considerable weight to engage with Asia-Pacific fora, such as regional security discussions, not disengage from them,” says Street.

Australia has supported global bans on chemical and biological weapons, landmines and cluster munitions. “Australia is committed to the elimination of nuclear weapons pursued in an effective way. However, so long as the threat of nuclear attack exists, the United States’ extended nuclear deterrence serves Australia's security interests”, a spokesperson for Australia’s Department of Foreign Affairs and Trade (DFAT) told IDN.

According to the 2016 annual poll by the Sydney-based Lowy Institute for International Policy, support for the U.S. alliance has slipped nine points: 71 percent of Australians see the alliance as ‘very’ or ‘fairly’ important to Australia’s security, the lowest level of support since 2007, but still eight points higher than the result that year.

Australia feels its efforts must be directed to strengthening the Nuclear Non-Proliferation Treaty (NPT), which is the cornerstone of the global disarmament and non-proliferation regime, and implementing its commitments, such as those agreed in the action plan of the 2010 NPT Review Conference.

“A nuclear weapons’ ban treaty without the participation of countries which possess nuclear arsenals, or without due regard for the international security environment, would be ineffective in eliminating nuclear weapons”, the DFAT spokesperson added.

While the NPT remains essential for preventing the spread of nuclear weapons and as the basis for disarmament negotiations, Wright says, “The treaty prohibiting nuclear weapons is a measure designed to implement Article VI of the NPT. The prohibition treaty will close the loopholes in the existing international legal regime governing nuclear weapons. It will make it clear beyond doubt that it is illegal for any nation to use, test, manufacture or stockpile nuclear weapons."

Wright adds: "It is deeply concerning that Australia and several other pro-nuclear weapon nations seem to have abandoned their support for the NPT. They are refusing to comply with their obligation under Article VI of the treaty to pursue negotiations for nuclear disarmament."

All 191 NPT state parties have committed in Article 6 to “pursue negotiations in good faith on effective measures relating to cessation of the nuclear arms race at an early date and to nuclear disarmament”.

“In 1996 the International Court of Justice advised that they have an obligation to bring these negotiations to a conclusion. Resolution L.41 conforms to this obligation and attempts to give practical expression to it,” says Ramesh Thakur, Director of the Center for Nuclear Non-Proliferation and Disarmament, Crawford School of Public Policy at the Australian National University in Canberra.

Four of the five nuclear weapons’ states who are signatory to the NPT, France, Russia, the United Kingdom and the United States, voted against the Resolution alongside Israel, a non-NPT nuclear power. China, which has about 260 nuclear warheads, India with between 100-120 warheads and Pakistan with between 110-130 warheads, abstained.

Thakur says, “A legal nuclear ban treaty by itself cannot deliver nuclear disarmament, but it can be a vital element to revive flagging momentum and re-energize efforts to move from a ban to total elimination of nuclear warheads and dismantlement of the nuclear weapons infrastructure."

He adds: "A legal ban will further reinforce the normative boundary between conventional and nuclear weapons, strengthen the norm of non-use of nuclear weapons, and reaffirm both the non-proliferation and disarmament norms. Accordingly, a ban treaty will be complementary to the disarmament goal of the NPT and provide impetus to efforts toward an eventual Nuclear Weapons Convention that is universal, non-discriminatory and fully verifiable.”

Since the ratification of the NPT in 1973, Australia has more or less had a bipartisan approach to global nuclear issues. As Labour Party senator and Shadow Foreign Minister Penny Wong said in a media release, “Labor supports effective and feasible action toward non-proliferation and disarmament, and will continue to actively pursue a path toward these objectives. Labor shares international frustrations with the pace of disarmament and we remain committed to the cause of eliminating nuclear weapons.”

The Australian Greens have also called on Foreign Minister Julie Bishop to explain why Australia voted against the Resolution.

“Australia should support moves in the UNGA for a convention to eliminate nuclear weapons. Australia should change its foreign policy to reflect changed circumstances and should independently pursue Australia's interests before Mr Donald Trump takes over as President in January next year. These include complying with the non-aggression clauses of the UN Charter and the Treaty of Amity and Cooperation in South-East Asia”, former Australian diplomat, Dr Alison Broinowski told IDN.

A 2014 Nielsen poll showed that 84 per cent of Australians from a broad range of demographics want the government to support a ban.

Outreach Coordinator for ICAN Australia, Gem Romuld told IDN: “Our work in Australia tells us there is overwhelming public support for a treaty to outlaw nuclear weapons, to clearly stigmatise and rule out any form of Australian involvement in these weapons of mass destruction, for example, by assisting the U.S with nuclear targeting via the Pine Gap Joint Defence Facility in the Northern Territory. Australia assists the U.S in its war-fighting efforts by hosting the Pine Gap Joint Defence Facility, a major communications base, which would help nuclear weapons reach their destination in the event of a nuclear war”.

In recent years, the nuclear armed states have pursued costly programmes to modernise and increase their arsenals. The Stockholm International Peace Research Institute’s (SIPRI) 2016 annual nuclear forces data shows that while the overall number of nuclear weapons in the world continues to decline, none of the nuclear weapon-possessing states are prepared to give up their nuclear arsenals for the foreseeable future.

According to SIPRI, “At the beginning of 2016 nine states – the United States, Russia, the United Kingdom, France, China, India, Pakistan, Israel and North Korea – possessed approximately 4,120 operationally deployed nuclear weapons. If all nuclear warheads are counted, these states together possessed a total of approximately 15,395 nuclear weapons compared with 15,850 in early 2015.” [IDN-InDepthNews – 15 December 2016]