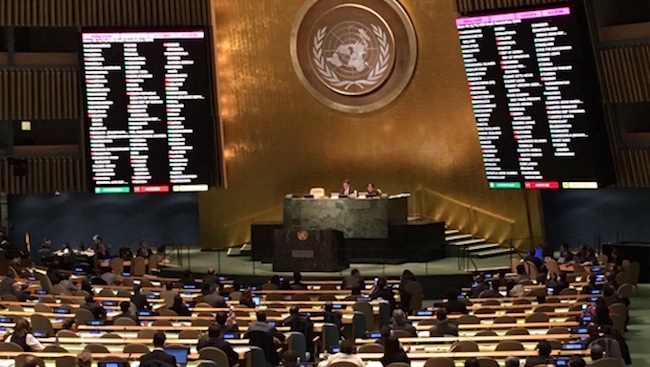 The civil society organisation was referring to Russian President Vladimir Putin and U.S. President-Elect Donald Trump have announcing their desire to "strengthen" their countries’ nuclear capacities.

“This reckless and aggressive behaviour by Russia and U.S. President-elect . . . leaves the rest of the world with a simple choice, silently watch the risk of nuclear war continue to rise or take action and prohibit these inhumane and unacceptable weapons of mass destruction” said ICAN Executive Director Beatrice Fihn.

John Hallam of the People for Nuclear Disarmament pointed out that Russia and the U.S. each currently has some 7,000 nuclear weapons, a considerable diminution from the times of the last cold war, and each maintains just under 1000 land – based ICBMs in a status in which they can be launched in a few minutes.

"The use of even a fraction of these forces (most likely on each other) would end civilisation as we know it (something that could be achieved by the use of as few as 5 large nuclear weapons in space above continental landmasses)," said Hallam.

It is against this backdrop that the General Assembly approved a historic resolution on December 23. The vote followed a decision on October 27 by the General Assembly’s First Committee – which deals with disarmament and international security matters – to begin work on the new treaty despite fervent opposition from some nuclear-armed nations.

113 UN member states voted in favour of the October 27 resolution, 35 against and 13 abstained. As ICAN noted, support was strongest among the nations of Africa, Latin America, the Caribbean, Southeast Asia and the Pacific.

A cross-regional group comprising Austria, Brazil, Ireland, Mexico, Nigeria and South Africa initiated the resolution. They are likely to lead next year’s negotiations.

According to ICAN, at a UN budget committee meeting shortly before the General Assembly adopted the December 23 resolution, the United States objected to a funding request for the planned four weeks of negotiations on the treaty to ban nuclear weapons.

"But under intense pressure from supporters of nuclear disarmament, it eventually withdrew its objection, and the committee authorized the request," stated ICAN, a civil society coalition active in 100 countries.

ICAN saw a leaked document distributed to all NATO members by the United States in October 2016 ahead of the First Committee decision. The U.S. – which possesses some 7,000 nuclear weapons – urged its allies to oppose the resolution and to boycott the negotiations.

The document warned that a treaty eliminating nuclear weapons would erode the perception that nuclear weapons are legitimate for certain nations and make it more difficult for NATO to engage in nuclear war planning.

According to ICAN, a number of close U.S. allies that in October voted against the resolution or abstained have indicated their intention to participate in the negotiations anyway, in order to help shape the treaty.

The Netherlands, which hosts U.S. nuclear weapons on its territory and abstained from voting, has confirmed that it will take part. Despite opposing the resolution, Japan’s Foreign Minister Fumio Kishida wants his country to attend.

ICAN is urging all nations to take part in the conference next year. “Every nation has an interest in ensuring that nuclear weapons are never used again, which can only be guaranteed through their complete elimination. We are calling on all governments to join next year’s negotiations and work to achieve a strong and effective treaty,” Fihn said.

ICAN stressed that the negotiations should proceed whether or not nuclear-armed nations agree to participate. “As a matter of principle, weapons that are indiscriminate in nature and are intended to cause catastrophic humanitarian harm should be prohibited under international law. This new treaty will place nuclear weapons on the same legal footing as other weapons of mass destruction,” Fihn added.

The treaty is likely to include provisions similar to those found in existing treaties banning biological weapons, chemical weapons, anti-personnel landmines and cluster munitions. These include prohibitions on use, development, production, acquisition, stockpiling, retention and transfer, as well as assistance, encouragement or inducement of anyone to engage in any of these prohibited activities.

Nuclear weapons remain the only weapons of mass destruction not yet outlawed in a comprehensive and universal manner, despite their well-documented catastrophic humanitarian and environmental impacts. Recent studies have also demonstrated that the risks of accidental or intentional detonations of nuclear weapons have been dramatically underestimated or misunderstood.

Victims and survivors of nuclear weapon detonations, including nuclear testing, have contributed actively. Setsuko Thurlow, a survivor of the Hiroshima bombing has been a leading proponent of a ban.

“This is a truly historic moment for the entire world,” she said following December 23 vote. “For those of us who survived the atomic bombings of Hiroshima and Nagasaki, we know that nuclear weapons are inhumane, indiscriminate, and unacceptable. All nations should participate in the negotiations next year to outlaw them.” [IDN-InDepthNews – 26 December 2016]