Trump's Nuclear Twitter Menacing Ahead of UN Talks in March 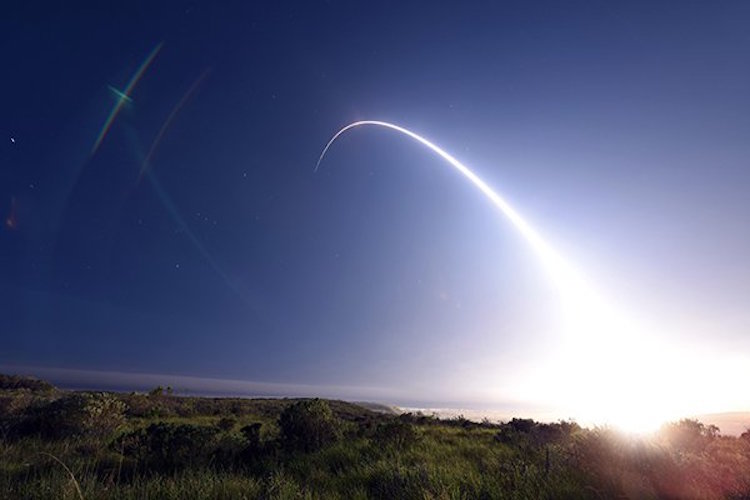 BERLIN | NEW YORK (IDN) – Ahead of the inauguration of Donald Trump as 45th President of the United States on January 20, analysts are far from certain whether he would take to policies that reduce nuclear dangers or resort to actions resulting in a suicidal arms race.

The guessing game is taking place against the backdrop of the United Nations General Assembly having confirmed that beginning March 2017, it would hold a conference open to all member states, to negotiate a “legally binding instrument to prohibit nuclear weapons, leading towards their total elimination”. The conference to be held at UN headquarters in New York will be divided into two sessions: from March 27 to 31 and from June 15 to July 7. [P33] JAPANESE TEXT VERSON PDF

Adding to the uncertainty surrounding the prospects of a nuclear-weapons free world is the fact that the new UN Secretary-General António Guterres is not known to ever have directly challenged the nuclear weapons policies of the P5 (five permanent members of the Security Council: USA, Russia, China, UK and France) during his term as Prime Minister of Portugal (1995-2002).

This, according to Alyn Ware, Global Coordinator of Parliamentarians for Nuclear Non-proliferation and Disarmament, might also have been an influential factor in him getting the Security Council endorsement ahead of the other candidates in October. The P5 are all nuclear-armed, and are the ones most responsible for a continued lack of progress in achieving multilateral nuclear disarmament.

In contrast to Guterres, Ban Ki-moon, whose second five-year term as Secretary-General expired on December 31, was persistently championing – though with little success – the cause of a nuclear-weapons free world on the basis of a Five-Point Proposal for Nuclear Disarmament released on United Nations Day October 24, 2009.

However, as head of the UN Refugee Agency, Guterres participated in the first international Conference on the Humanitarian Impact of Nuclear Weapons in March 2013 on Oslo.

"How Guterres addresses nuclear disarmament as UN Secretary-General, will be a critical question," according to Jonathan Granoff, President of the Global Security Institute.

"The objective to eliminate nuclear weapons and other weapons of mass destruction was agreed by all UN members in the very first resolution of the UN General Assembly. The unconditional obligation to achieve this goal was unanimously affirmed by the World Court. But so far this objective has not been met and humanity still lives under the existential threat of nuclear annihilation. The UN Secretary-General has a responsibility and mandate to act on this core global issue,” Granoff stated.

In an Open Letter to Trump on January 3, the Nuclear Age Peace Foundation recalls: "You have suggested that more nations – such as Japan, South Korea and even Saudi Arabia – may need to develop their own nuclear arsenals because the U.S. spends too much money protecting other countries. This nuclear proliferation would make for a far more dangerous world."

The letter adds: "It is also worrisome that you have spoken of dismantling or reinterpreting the international agreement that places appropriate limitations on Iran’s nuclear program and has the support of all five permanent members of the United Nations Security Council plus Germany."

David Krieger, President of the Nuclear Age Peace Foundation, commented, “Mr. Trump does not seem to have a well-grounded understanding regarding threats to use the U.S. nuclear arsenal. This poses a dramatic danger to the whole world, including U.S. citizens. His presidency may constitute and the most dangerous period in human history.”

The Open Letter advises Trump of the U.S. obligation under the Nuclear Non-Proliferation Treaty to negotiate in good faith for an end to the nuclear arms race and for nuclear disarmament. It explains that nuclear deterrence is based upon on the willingness of political leaders to act rationally under all circumstances, even those of extreme stress. It goes on to say that nuclear proliferation and a renewed nuclear arms race would both make for a far more dangerous world.

In Arms Control Today, Daryl G. Kimball, Executive Director of the Arms Control Association (ACA) wrote on January 6: Donald Trump has made some promising remarks about nuclear policy and some irresponsible comments. He reportedly told Kazakhstan’s President Nursultan Nazarbayev, “There is no more important issue than nuclear disarmament and nonproliferation to be addressed in a global context,” according to a Kazakhstan-issued statement on their November 30 phone call.

But weeks later, Trump strongly implied he is contemplating a radical break from decades of bipartisan U.S. policy to reduce nuclear stockpiles and avert global nuclear competition, wrote Kimball. On December 22, he launched a tweet declaring, “The United States must greatly strengthen and expand its nuclear capability until such time as the world comes to its senses regarding nukes.”

When asked by MSNBC to clarify, Trump reportedly said, “Let it be an arms race. We will outmatch them…and outlast them all.” According to Kimball, Incoming White House press secretary Sean Spicer offered an interpretation to NBC News that Trump is sending a “warning” to other countries “that this president’s going to take action”.

ACA's Executive Director rightly pointed out that if Trump and his advisers really believe nuclear “warnings” and calls for a global arms race are in the interest of the United States, they should think again. "History suggests that nuclear threats do not intimidate the likes of Russia, China, North Korea, or terrorist groups. Such bravado is reckless and dangerous. It confuses close allies, undermines global nonproliferation efforts, and motivates adversaries."

In its Open Letter, the Nuclear Age Peace Foundation reminds Trump that as President of the United States, he will have "the grave responsibility of assuring that nuclear weapons are not overtly threatened or used during your term of office".

It adds: The most certain way to fulfil this responsibility is to negotiate with the other possessors of nuclear weapons for their total elimination. The U.S. is obligated under Article VI of the Nuclear Non-Proliferation Treaty to engage in such negotiations in good faith for an end to the nuclear arms race and for nuclear disarmament.

"A nuclear war, any nuclear war, would be an act of insanity. Between nuclear weapons states, it would lead to the destruction of the attacking nation as well as the attacked.  Between the U.S. and Russia, it would threaten the survival of humanity," the Open Letter warns.

Even if nuclear weapons are not used intentionally, says the Open Letter, they could be used inadvertently by accident or miscalculation. "Nuclear weapons and human fallibility are a dangerous mix."

Nuclear deterrence presupposes a certain view of human behaviour, says the Letter. "It depends on the willingness of political leaders to act rationally under all circumstances, even those of extreme stress. It provides no guarantees or physical protection. It could fail spectacularly and tragically."

The Open Letter adds: "As other presidents have had, you will have at your disposal the power to end civilization, the human species and most other forms of complex life. You will also have the opportunity, should you choose, to lead in ending the nuclear weapons era and achieving nuclear zero through negotiations on a treaty for the phased, verifiable, irreversible and transparent elimination of nuclear weapons.

The letter, signed among others by Noam Chomsky, Richard Falk, David Ellsberg, advisors, board members and staff of the Nuclear Age Peace Foundation, and many others who view Trump’s presidency as possibly the most dangerous period in human history, concludes: "We, the undersigned, urge you to choose the course of negotiations for a nuclear weapons-free world.  It would be a great gift to all humanity and all future generations."

Kimball recalled that for decades, Republican and Democratic leaders have negotiated agreements to limit and cut nuclear arsenals, worked to curb the spread of nuclear weapons, and sought to reduce the risk of miscalculation and catastrophe.

The ACA Executive Director wrote: "Since the administration of Ronald Reagan and the end of the Cold War, the United States has drastically reduced the size of its nuclear arsenal. In fact, Republican presidents have cut the arsenal far more aggressively than have their Democratic counterparts. Since 1992, presidents – regardless of political party – have observed a nuclear test moratorium."

He adds: "If Trump hopes to reduce and not increase nuclear dangers, he must maintain the previous bipartisan policy of engaging with Russia to cap and reduce the two nations’ still enormous and deadly nuclear arsenals, strengthen the global taboo against nuclear testing, and bring the world closer to the peace and security of a world without nuclear weapons." [IDN-InDepthNews – 09 January 2017]