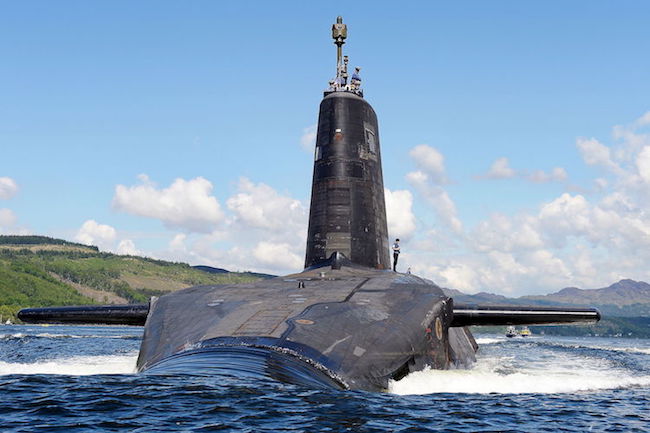 LONDON (IDN) - Now that the new world order some of us were talking about threatens to collapse into a new world disorder, the emerging fear is what the U.S and Russia could agree on, rather than what they disagree about. U.S President Donald Trump and Russian President Vladimir Putin have discovered one another as political twins looking in the same direction from opposite sides – what were thought to be opposing sides anyhow. Nowhere does this union of vision appear more deadly than in the business of nuclear armament, and business it is.

Both leaders have said yes to all the weapons they have, and nodded in the direction of yet more. Both have spoken of “strengthening” their nuclear capabilities. Strengthen how much more to what end? Dire arithmetic abounds on how many times over each can destroy the world. Skip the count; once would be enough. [P37] JAPANESE TEXT VERSON PDF

The UN General Assembly resolved pre-Trump to hold a conference in March and later in June and July of this year to build a legally binding agreement to erase nuclear weaponry. Few hope that the two leaders will see the light before any nuclear flash. The UN conference will be a timely move to strengthen global politics that could pull those political twins, together with some of their cousins, back to the path of sense – and survival.

Some cynical foresight appears obvious, that the UN meeting would end up as little more than a talking platform to echo agreement among the converted, with the rest who matter somewhere far outside the hall. Who, if anyone among the haves and the will-haves might convert to disarmament? Could that hope, unlikely as it may seem, rest with Britain? The Campaign for Nuclear Disarmament (CND) certainly seems to think so, and not only because it is itself based in Britain. Britain is tied most closely, and historically, to U.S. nuclear policy and into its very weapons system; but also, resistance to nukes within Britain is high and rising.

"There is some speculation that Britain is the weakest link – given that opposition here is so strong – and that if we can bring a change in policy here it can have a knock-on effect with other nuclear weapons states," Kate Hudson from CND tells IDN. "That is certainly the end to which we are working." It is not clear "by what exact mechanism the small number of global leaders that currently support these weapons will come to their nuclear senses, but it has to happen if we are to have a future for the human race," says Hudson.

The workings of such a mechanism do not seem clear in Britain either but it is easy to spot where the weakest chain of that mechanism lies – up in Scotland where Britain's Trident nuclear submarine system is based. That system needs a near 300 billion dollar revamp, and public voice is pushing political voices against a renewal that appears to the vast majority within Scotland to be dangerous, unaffordable and probably unworkable.

The very likely, if not imminent, departure of Scotland from Britain post-Brexit clouds the nuclear picture further. Scenic English coastal villages that live in tradition and off tourists will not exactly welcome a nuclear sub parked in the bay across from their breakfast rooms. The vast majority of the British have shown they can see plain sense that their leaders seem to miss. Nobody has forgotten that Iraq invasion over those publicly projected hallucinations over 'Saddam's weapons of mass destruction'? A million marched past 10 Downing Street against that invasion, a few hundred thousand children among them. Every kid on that street then was right, the government wrong.

Kids and the rest are right again, this time about nuclear disarmament. A survey by Bristol University found that only 3 percent of those surveyed said nuclear weapons make them feel safer. Precedents for such sense abound around the globe.

"The global trend is away from nuclear weapons, both in terms of numbers of warheads – which have reduced significantly since the end of the cold war – and in terms of opinion at both state and civil society level," says Hudson. "The number of countries involved in nuclear weapons-free zones has increased, covering almost the entire southern hemisphere and parts of the northern, and many leading statespeople now recognise that nuclear weapons are just too dangerous to possess."

Can just a handful of leaders veto survival of the world? And now that fundamentally moral – and political – question will be put to the test at the General Assembly conference. Belief in the capacity to act is itself limited; the UN Security Council enshrines after all the power of the few to decide. Within those limits, and well short of any dramatic ban on nuclear weapons by July of this year, some limited positivity is certain. After two decades on the back burner, nuclear disarmament will return to the formal international agenda and that is already some steps forward, if not the sought destination. A groundswell of popular opposition to nuclear weapons is rising now that look set to amplify a popular resistance to nuclear weapons.

"No world leader can block the establishment of a global nuclear ban treaty but the process of getting them to sign up may well be a difficult one," says Hudson. The difficulty lies in getting a few leaders to see what is right for them and their people. “Nuclear disarmament is in their interests too,” she adds. “No more waste of national resources on useless WMD, no perpetual threat of annihilation to their countries to which they would not be immune. It is our job to bring them to the table, to back the ban, and that needs to happen before a nuclear detonation, either by accident or design."

That logic will be flashed firmly in the faces of Trump and Putin primarily. They are not the only ones, though. As CND points out, some – though not all - of the other nuclear weapons states, UK, France and Israel, oppose the ban. North Korea supports the ban, and China, India and Pakistan abstained. Other opponents are largely those tied into military alliances with the U.S., like the NATO states and Japan, South Korea and Australia.

"The UN negotiations have been backed by the vast majority of members of the UN General Assembly," says Hudson. "The international desire for global nuclear disarmament has been articulated by many states, for decades and has been obstructed by a very small number of nuclear weapons states, standing in opposition to international law, as enshrined in the nuclear Non-Proliferation Treaty."

The UN conference will not snap this inner chain of nuclear weaponry straightaway, it’s fair to fear. But given the colossal task, it will be something if that chain can be weakened at some of its vulnerable points. That weakening will come only through the force of public opinion, and not just in Britain. The force of public opinion has been overwhelmingly strong across the world already, and led to policy decisions when leaders themselves might not always have generated them. Those few remaining leaders can now be led by their people. The UN meeting comes as a signal to people, beyond the stuff of diplomatic channels that are prone to choking. [IDN-InDepthNews – 09 February 2017]